WALLOON LAKE — For more than 60 years, the Walloon Lake Art Club has met to share ideas, inspiration and put their painting skills to the test.


On Saturday, July 30, the club will host its annual outdoor art show and sale, featuring many items created during the club’s weekly painting workshops.


The art show and sale features a variety of art, much of which are paintings of Walloon Lake and the surrounding area.


Babs Hanahan, a member of the group for the last 10 years, said the club has been getting together since the 1940s, and currently meets each Thursday to paint.

“It’s just a wonderful group and has really grown,” Hanahan said. “The group used to be made up of mostly summer residents, but over the past few years, it has really grown to include many year-round residents as well.”


The group often hires an artist to come in and discuss a specific technique during their weekly meetings, and many club members also volunteer to lead the group on occasion.


More than a dozen area artists will have their work on display and for sale during the event, including a just released book by Betty Farrier, that includes not only her paintings, but poetry as well.


Hanahan will also be painting during the event, allowing those in attendance to watch her at work. 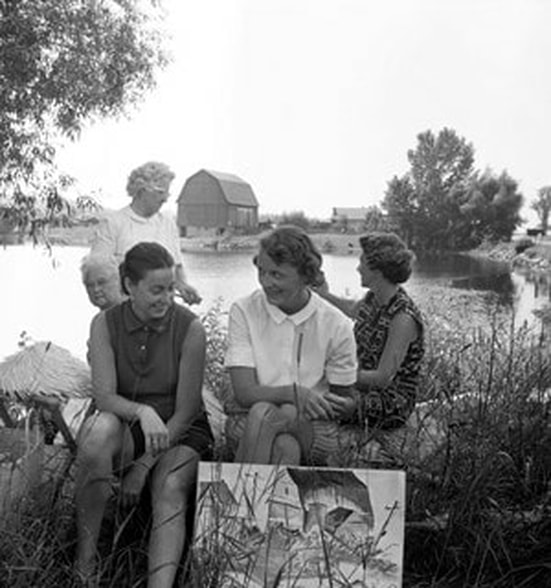 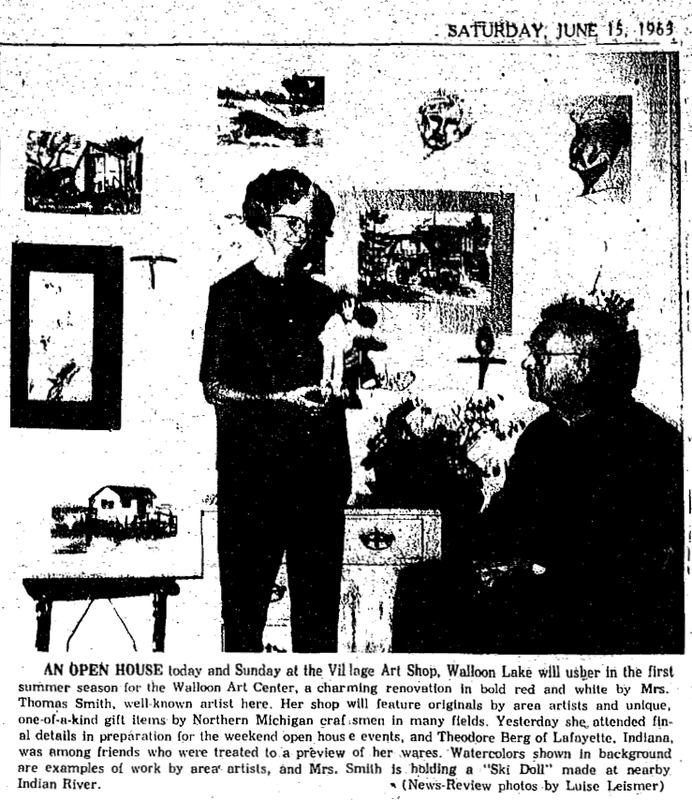 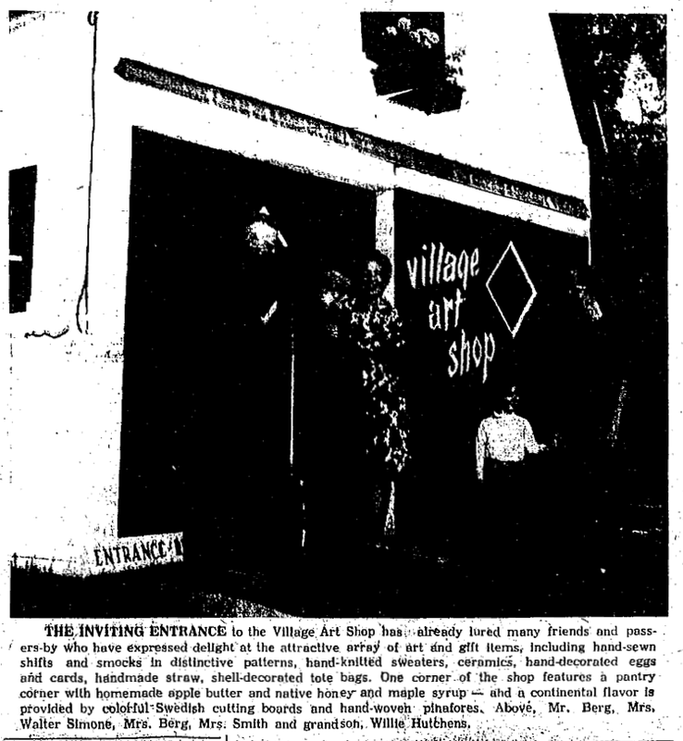 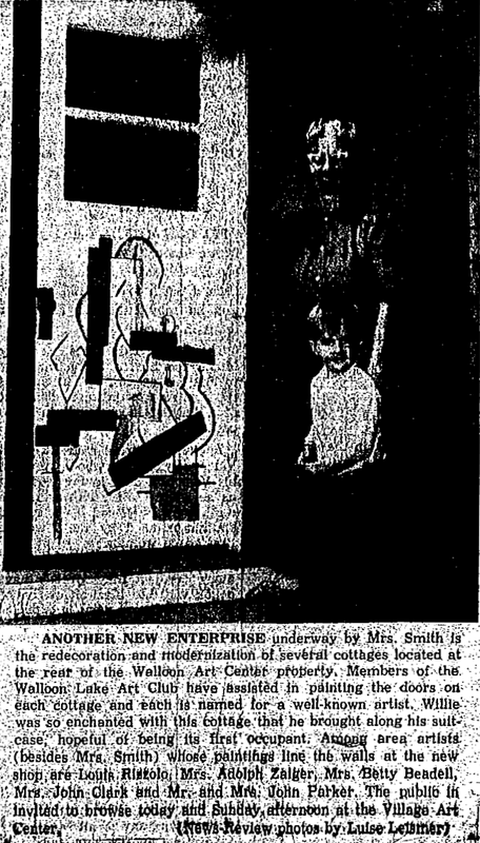 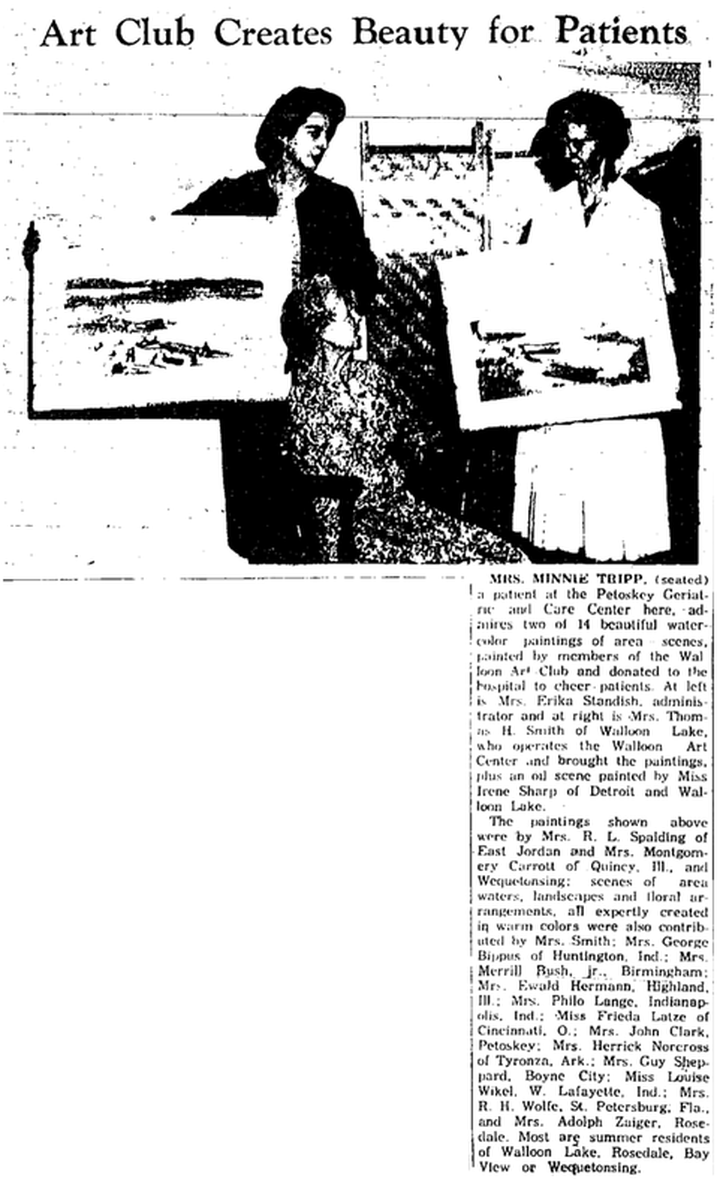 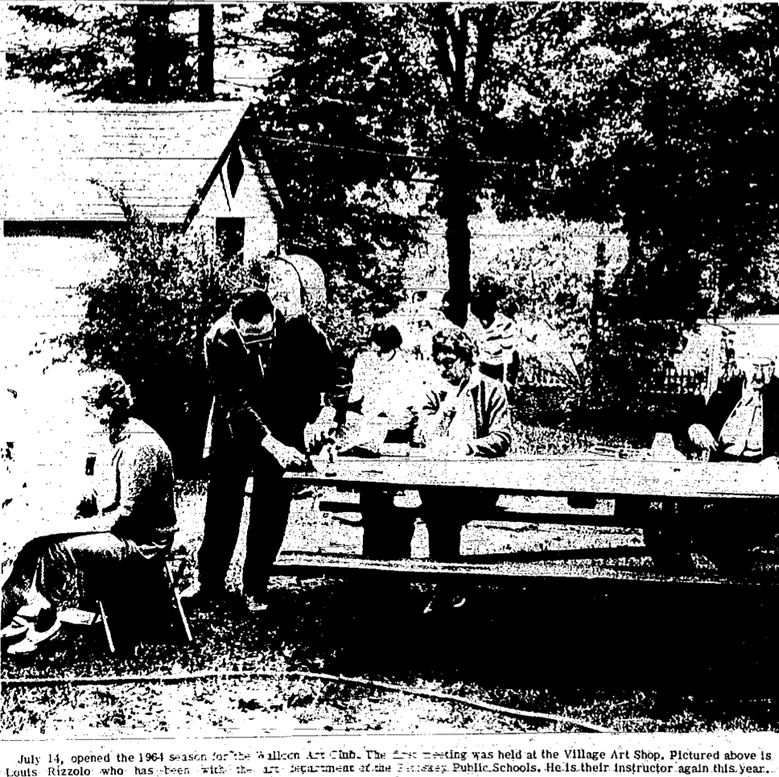 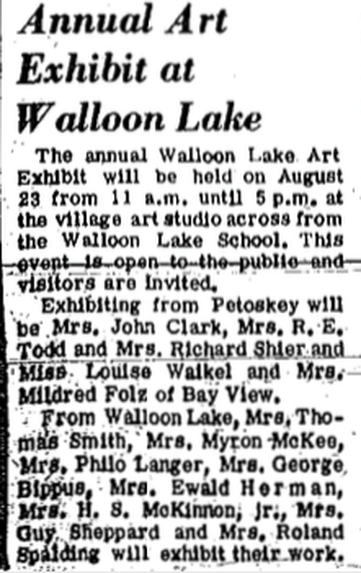 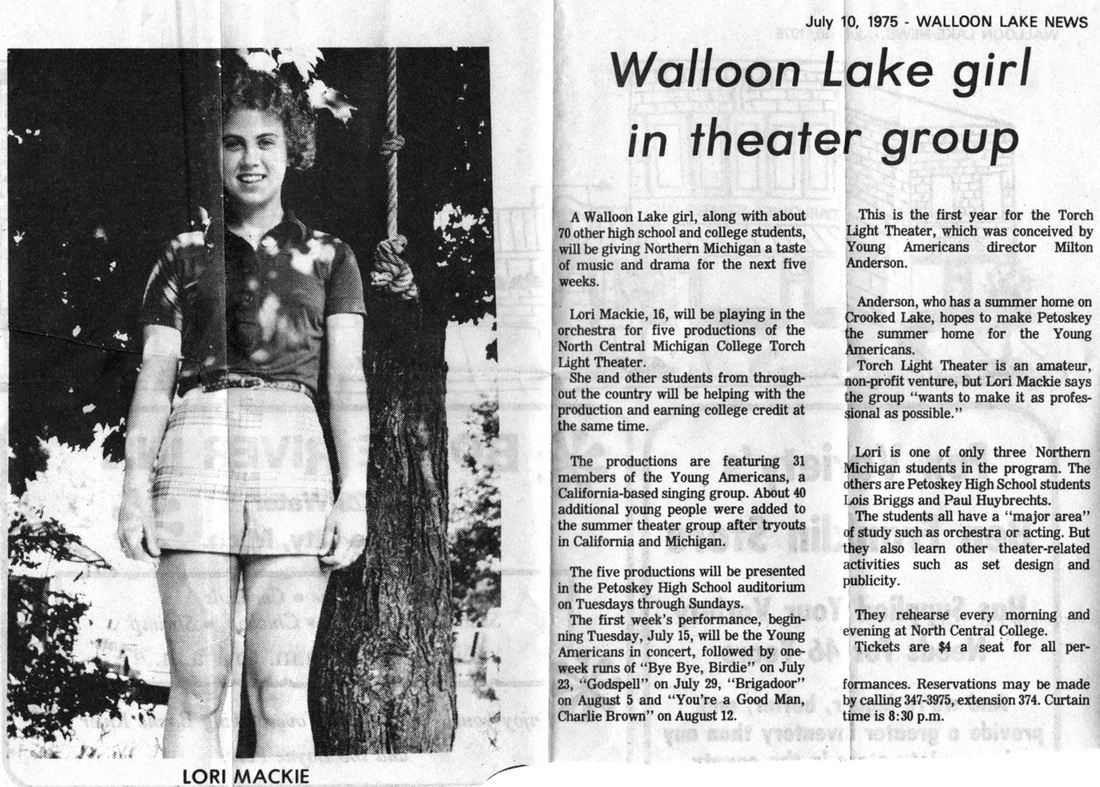 10 July 1975 ~ Walloon Lake News
1980's Forward
~ DeWaard Walloon Lake Art Gallery ~
Transcribed from the Petoskey News Review:
1/15/2004
Jean E. Heiges DeWaard
Jean E. Heiges DeWaard, 76, of Petoskey, went home to be with her Lord and Savior Jesus Christ on Jan. 12, 2004. Her daughters were at her side, and she was in the loving care of the staff of Bay Bluffs Medical Care Facility.
Memorial services will be held at 11 a.m. Saturday, Jan. 17, at Family Of Christ Church, Resort Pike Road, Petoskey. Pastor James Larsen will lead the Homecoming Celebration. Interment will be held in the spring.
Jean was born in Traverse City, the daughter of Levern "Pat" and Thirza (Friend) Heiges. She graduated Traverse City Schools in 1945 and attended Michigan State University, receiving her bachelor of fine arts degree in 1949. She taught at Parchment Schools.
In 1951, Jean married LaVerne M. DeWaard. They resided in Saginaw, where Jean was a customer service specialist for Michigan Bell Telephone for several years. The couple began their family in Novi in 1958.
Jean was active with school, community and her church for 20 years. During this time, Jean embarked on her professional art career and partnered Vern in the family-owned business.
In 1978, Jean relocated to Waterford, Mich., where she taught adult education art and facilitated art therapy for geriatric programs in Oakland County. Jean felt part of God's service to others required learning and growing herself, so she worked on her master's of fine arts degree with an art therapy focus at Madonna University in Livonia.
She was a member of Birmingham Bloomfield Art Association.
Jean moved to Petoskey in 1989 and taught art through the Friendship Centers of Emmet County. She felt privileged to mentor several adult students and teach on-location for the Tip of the Mitt Watershed Council.
She owned Expressions In Art, ran a summer gallery on Walloon Lake, and was a prolific artist and sculptor. Because of her love and respect for all God's creation, she supported environmental preservation and renewal efforts locally and worldwide.
She belonged to the Crooked Tree Arts Center and was a member of Michigan Watercolor Society.
Survivors include her daughters, Melinda Fisher of Petoskey, Martina DeWaard of Banning, Calif.; sister, Patricia Marshall, of Old Mission Peninsula, Traverse City, nieces, Jean (Bob) Arp of Wyoming, Mich., and Mary (Mark) Clabeaux of Caledonia, Mich., and their children; cherished friends, Marcia Powrozek, Darren Scott, DeAnne and Bob Stephenson and family.
She was preceded in death by her parents, Pat and Thirza Heiges, and brother-in-law, John D. Marshall.
In lieu of flowers, memorial contributions may be made to the family.
Arrangements were handled by Charles G. Parks Funeral Home in Petoskey. 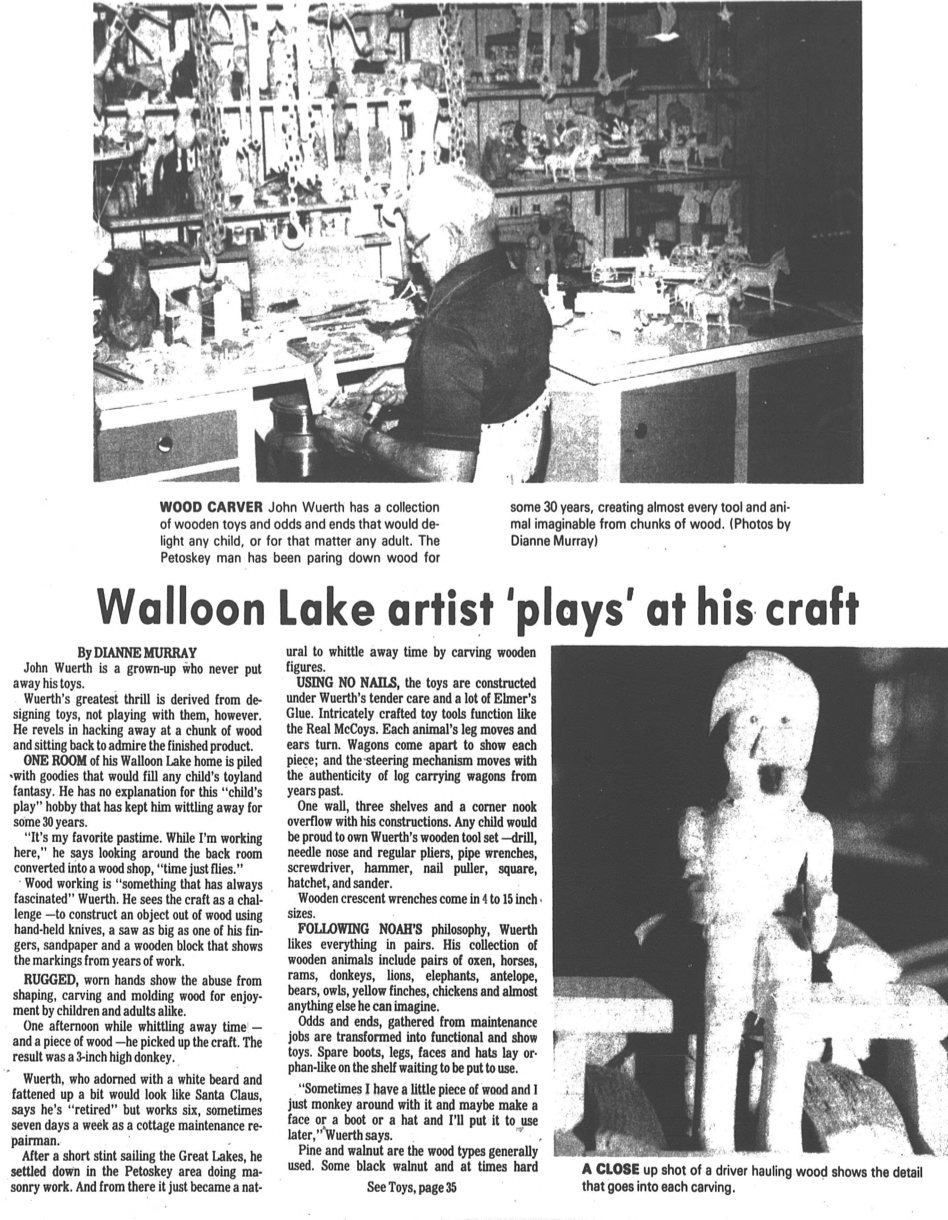 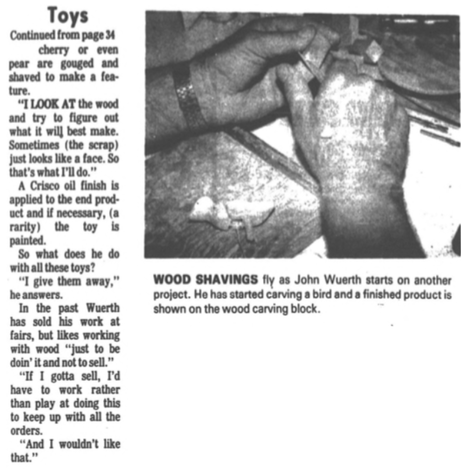 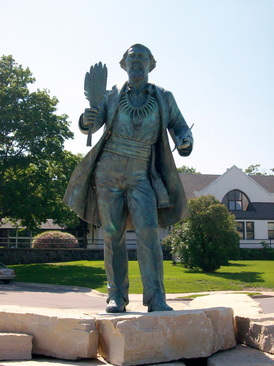 Chief Petoskey Sculpture ~ June 2008
In a Petoskey News Review 11 July 2005 article titled "Chief Ignatius Petoskey Sculptor Dedication" staff writer Jeremy McBain, wrote of the 6 foot tall bronze statue, with a green patina, of the Chippewa Indian Chief whose name was used in honor of the City of Petoskey. Many of the people in attendance for the dedication of the statue that day in July 2005 were descendants of Chief and Mary Petoskey. The impressive sculpture was created by Melrose Township sculptor Pietro Vinotti. Robert Dau who had been born in Petoskey commissioned Vinotti, and then donated the sculpture to the City of Petoskey and its people. Mr. Dau praised the sculptor Peitro Vinotti, by saying that Vinotti is to sculpting as Walloon Lake author "Hemingway is to writing". The statue includes several significant symbols like: 1] Necklace of a Peace Medallion of the style given to dignitaries 2] Necklace of bear claws and fur regarding his work with fur traders 3] A fan of Honor Feathers to honor elders, veterans, country 4] Pipe with a bear on the stem showing power, determination, and wisdom 5] Moccasins upon his feet of the very style he wore, and on display at the Little Traverse History Museum in Petoskey. These are just a few of the symbols on the statue which are purposely interwoven into the sculpture.


The following website gives a 360º view surrounding Chief Petoskey, including the Arlington Park with its Memorials.

360º View Surrounding Chief Petoskey
Pietro P. Vinotti was born on September 15, 1944 and passed away on Sunday, April 10, 2011.
Pietro was a resident of Walloon Lake, Michigan.
In 1882 a committee brought before the Petoskey Village Council
to make and place a pedestal in Petoskey for a bust of Ignatius Petoskey.
The council declines to act as trustees to aid in the subscription.
John McCutcheon Performs with Great Lakes Woodwind Quintet
~ April 2014 ~ 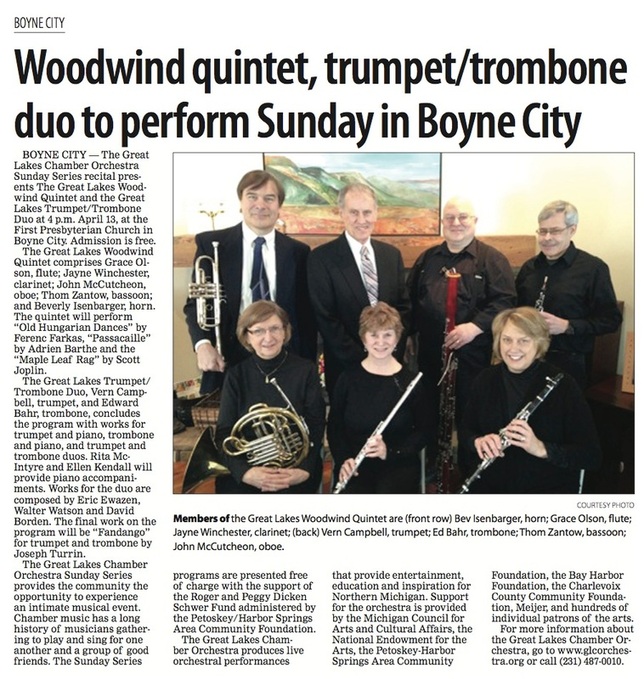 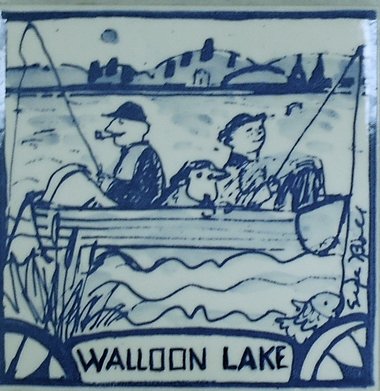 Martina Hahn is a Northern Michigan artist. Her work can be accessed on her own website by clicking HERE.
Please do not copy the photos on this site, many of which have been submitted by private individuals...
just come back and visit the site often to view the photos.