Most posted items will enlarge by "clicking" on them.
"Clicking" on some color highlighted words may access additional information.

Mr. Glen Williams has written A History Of Camp Michigania. 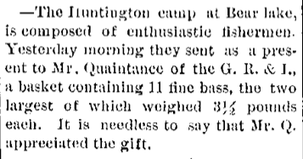 22 July 1896 ~ The Daily Resorter
Huntingdon Camp had begun as Indiana Camp when the camp began in 1891.

From 1895 to 1903 Walloon Resort, a small resort was located on the previous Mr. A.W. Olds residence farmland.
Camp Michigania is now located on this property.

When the property became Camp Sherwood in 1927, Mr. E.Victor Tomlinson was the director and principal owner.

Then according to Mr. Glen William in "A History of Camp Michigania", "On June 12, 1936, Camp Sherwood (Mr. E. Victor Tomlinson, Director) purchased portions of the property from heirs of the Belt and Chew families. In 1944, the Greenwood Club (Mr. & Mrs. E. Victor Tomlinson, co-owners) bought other portions from Bertha Chew and from the Koboski and Palma families. The property was then almost completely consolidated as we know it today.
Lucia Scully Oelz who has spent every summer at the Scully's family's cottage on the North Shore spent much of her time at the cottage. Lucia wrote: "When I was ten, I was a camper for eight weeks each summer at Huntingdon Camp...six years as a camper and then four as a counselor.  My parents wanted to be sure that I kept busy and out of trouble and so I did not hang out with the usual summer crowd of teens during those years (though I really wanted to be part of the racing group and have a Snipe and participate)!"
In the very early 1960s the The Tomlinson Family, owners of Camp Huntingdon (Girl's Camp)/Sherwood (Boy's Camp)
on Walloon Lake hoped to sell their camp.
From this wish, the dream of Camp Michigania was born. The Michigan Alumni Association purchased the 377 acre site, in December 1962.
An Alumni Association University of Michigan Spring 2012 article stated: In its first year, 1961, Michigania comprised a group of about 50 families occupying corrugated Steel sheds for one week at the U-M Biological Station on nearby Douglas Lake. They enjoyed the experience enough to pursue a second year, this time at two different locations. One of those locations, Camp Sherwood-Huntingdon, was available for sale, so the Alumni Association purchased the property it has occupied ever since.
The Skornia Family have been neighbors to what is now Camp Michigania since 1881. By 2015, some of the Skornia Family has moved away, now living in Texas, while some of the family have remained on the lake. Steve Skornia has many 1920 photos, that he has submitted to be posted on this website, which relate to the Camp Michigania location when it was still a farm. These photos below, and the associated text, add greatly to the history of the area with the camps of the lakeshore.

Steve Skornia explained, "Mr. Glen Williams, in 'A History Of Camp Michigania', commented that Dwight Sumner worked packing pickles.  These pictures are from the time when this place was a pickle farm. According to Mr. Williams, the Ekhart Family bought the property in 1923. These pictures were dated 1925. Anyone familiar with Camp Michigania today will recognize the views. The farmhouse, in a number of the photos, was located on the north side of the old dining hall. It can be seen in earlier pictures of Camp Michigania, and also in the brochure from Camp Sherwood, where the farmhouse was used as an administration building. The porch, which faced the lake, was changed from a single story to two stories." 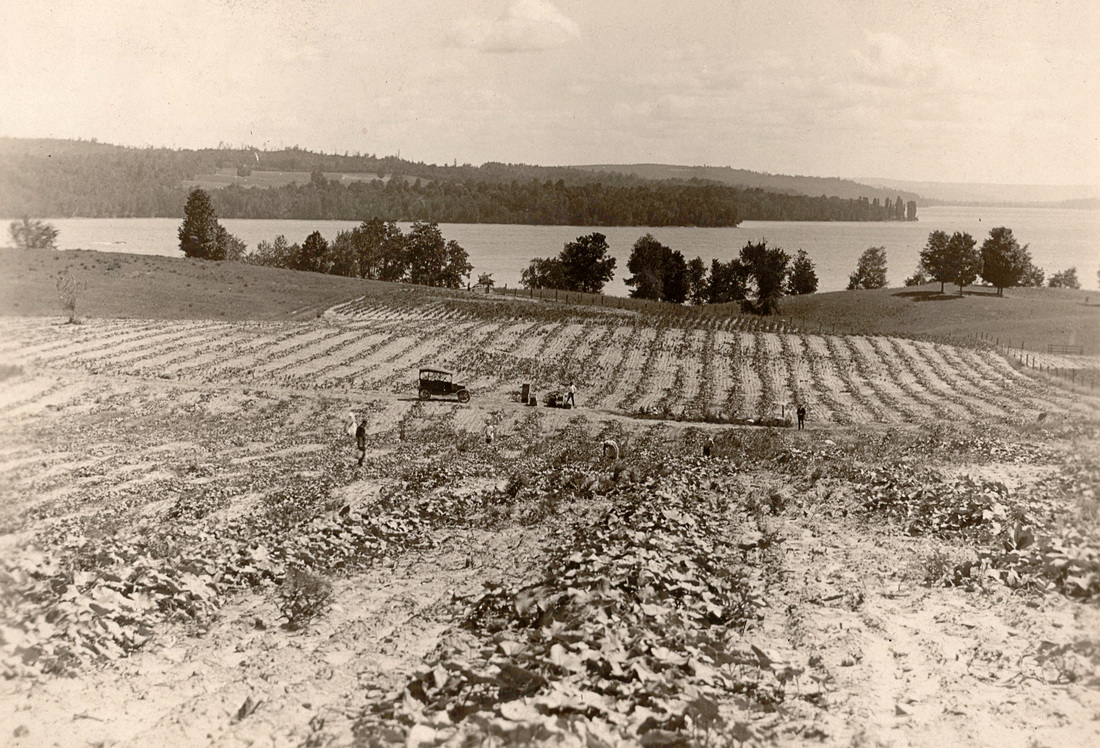 The farmhouse and the barn are outside of the picture on the hill to the left. The photo was taken from west of the Camp Michigania swimming beach.
Mr. Glen Williams in his "History of Camp Michigania" explained in part: "I'm going to digress from my tale at this point to talk about an early neighbor, Dwight Sumner, whose father Warren, was one of the first settlers to arrive in Bay Township (1883).

It was Henry Ekert [Advertisement below spells it as Eckert.] for whom Dwight Sumner worked as a young boy in the early '20s. Dwight relates that among other things, he picked pickles on the Ekert farm. It was their export crop. The pickles were put on wagons and transported to Horton Bay, from which they could be shipped anywhere on the Great Lakes, and beyond. I suspect most of them found their way to Chicago.

Dwight and his brother, Philo, went to school in a one-room schoolhouse which stood on the property which Don and Donna Roberts now own, just outside the camp gate, on the south side of Camp Sherwood Road. Dwight tells of walking to school, following a path from Sumner Road on the south, up and down hills and through the swamp along our western border. At times there were upwards of 50 children enrolled in the school." 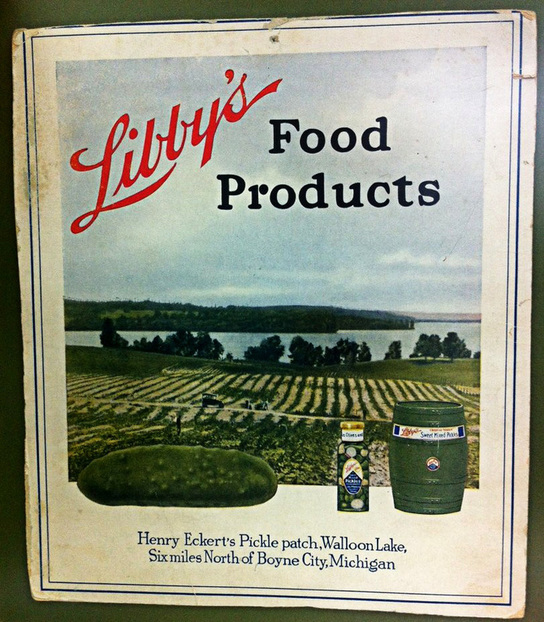 Libby Food Products with View of Walloon Lake ~ Note the similarity of the photo in this advertisement to the photograph above the advertisement. 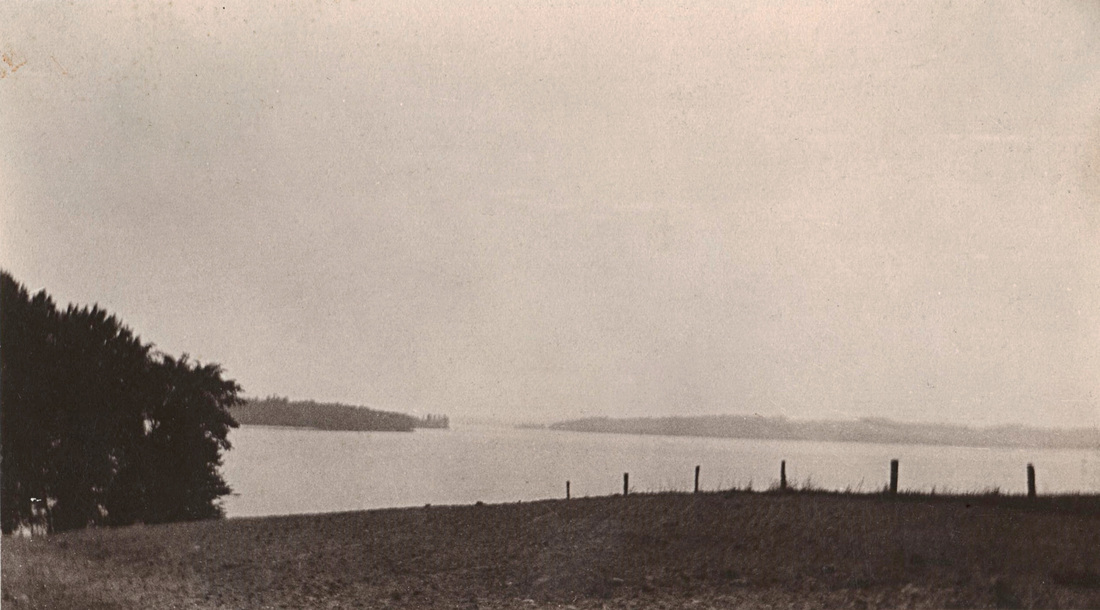 Looking toward the vilage, from the hill above the current Camp Michigania boat house. 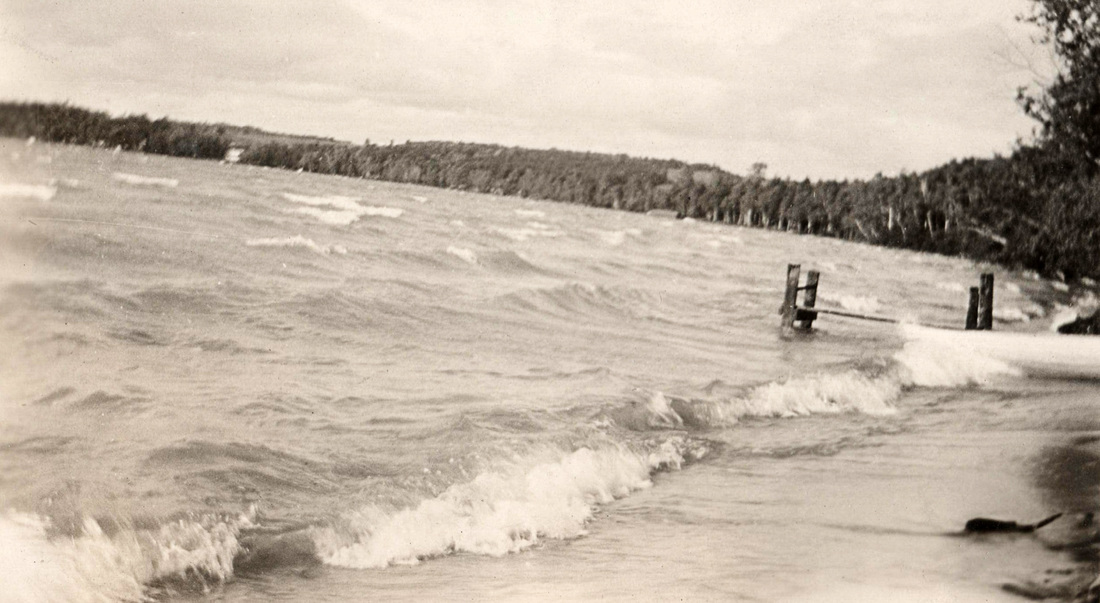 The swimming beach at Camp Michigania.... looking south toward where the sawmill was. 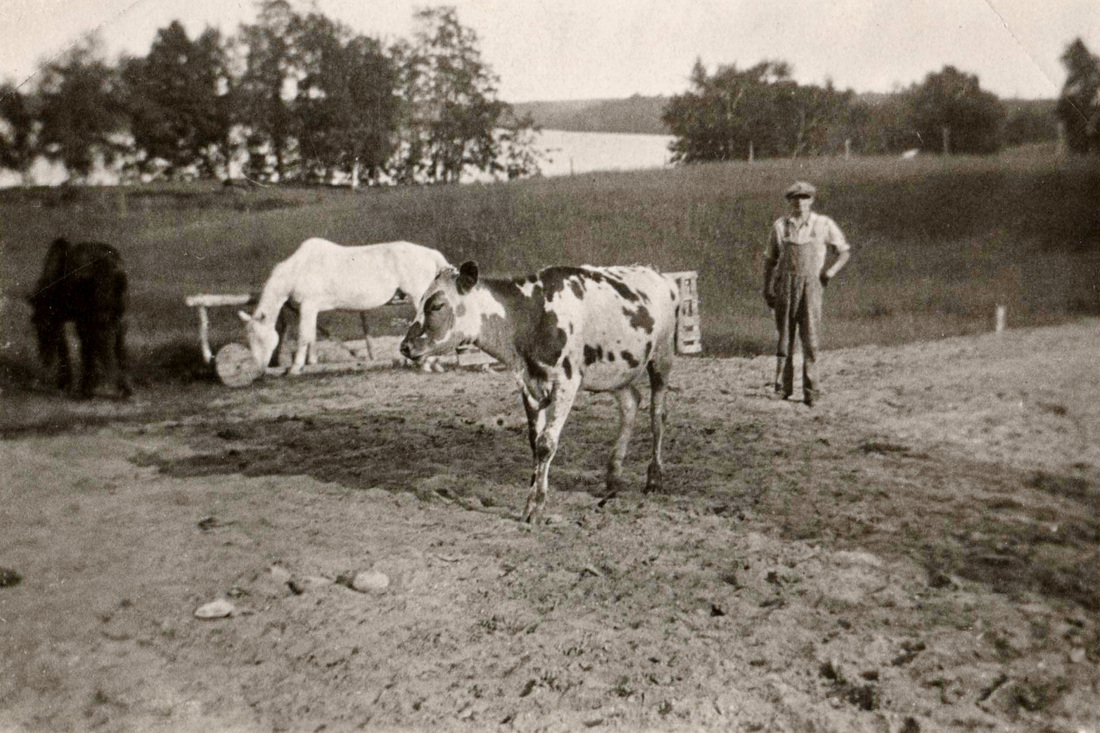 Barnyard on the south side of the (Maintenance) barn, looking toward the swimming beach. This is now parking for the maintenance barn. 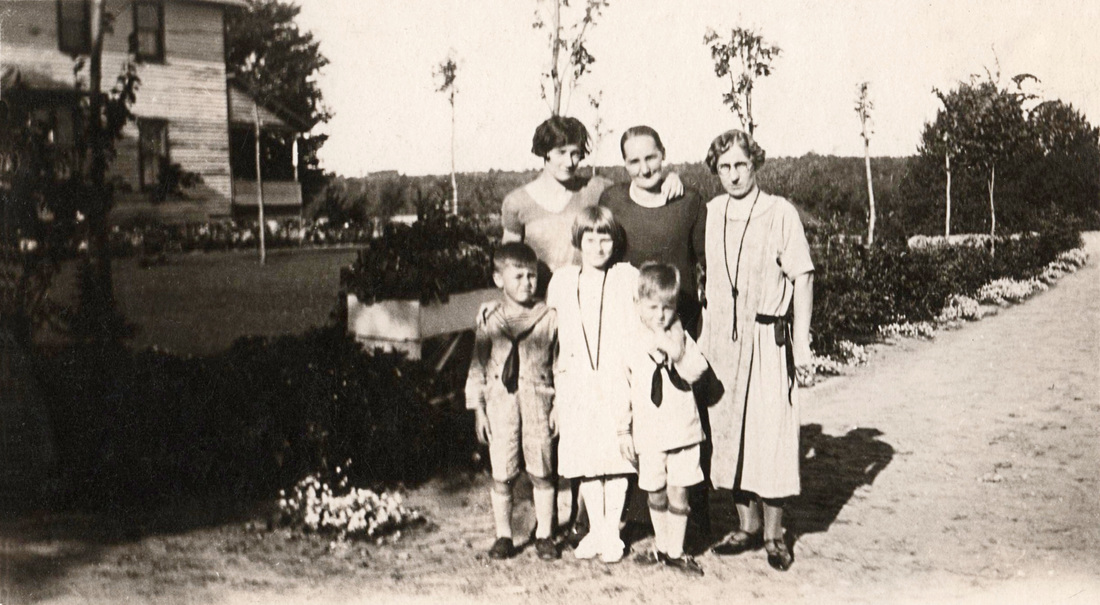 They are standing near the site of the current dining hall. At the time of the photo, it was part of a circle drive to the house (possibly Mrs. Eckert in the center back).
Again, Mr. Glen Williams in his "History of Camp Michigania" described the farm buildings in part: "The red (maintenance) barn and farmhouse (office/store/infirmary building) were virtually the same buildings we have at camp today. The lower level of the barn at one time housed the stock, but now has a ceiling and insulation which covers the huge hand-hewn timbers supporting the structure. The farmhouse still has high ceilings throughout, and a “Michigan” basement, approached by very steep & narrow steps."
Association Buys An Alumni Family Camp
Camp Sherwood Pamphlet from Days Gone By
Camp Michigania Dining Hall Construction (2010 Video)
Michigan Alumni: Camp Michigania: Then. Now. Forever. (2013 Video)
Swimming Walloon Lake at Camp Michigania (2013 Video) 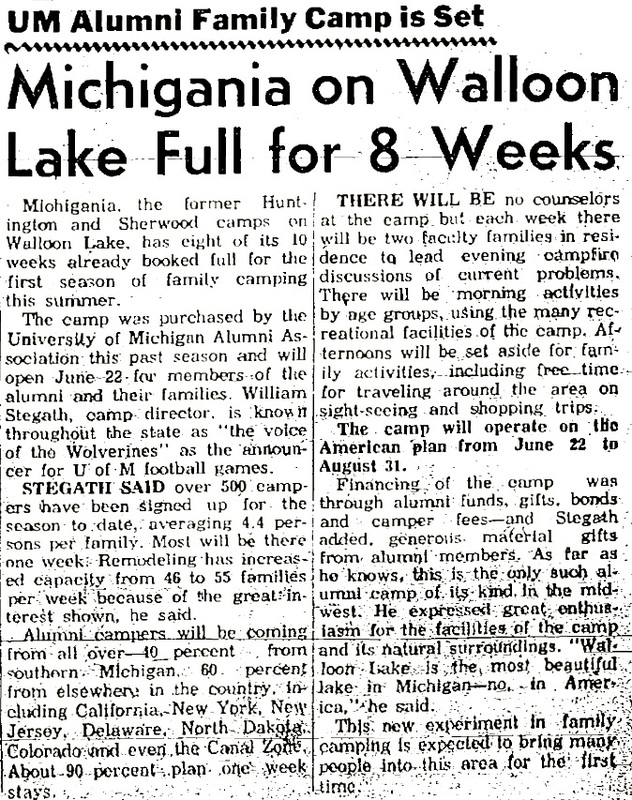 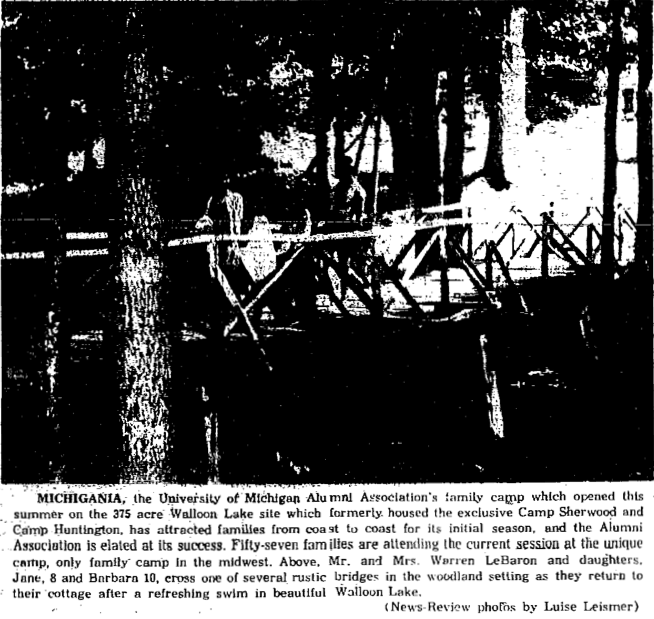 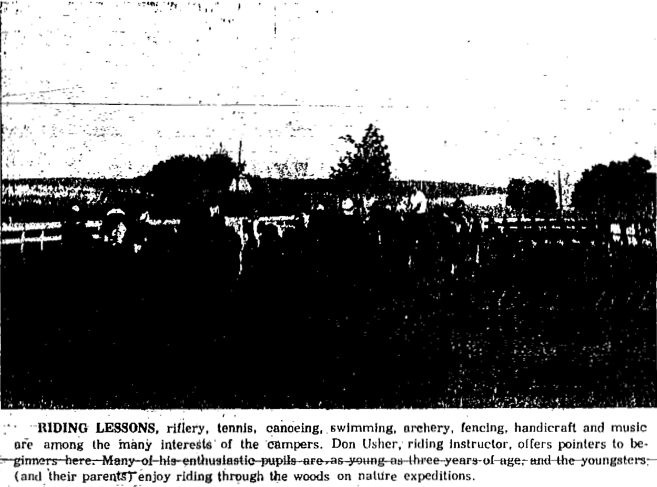 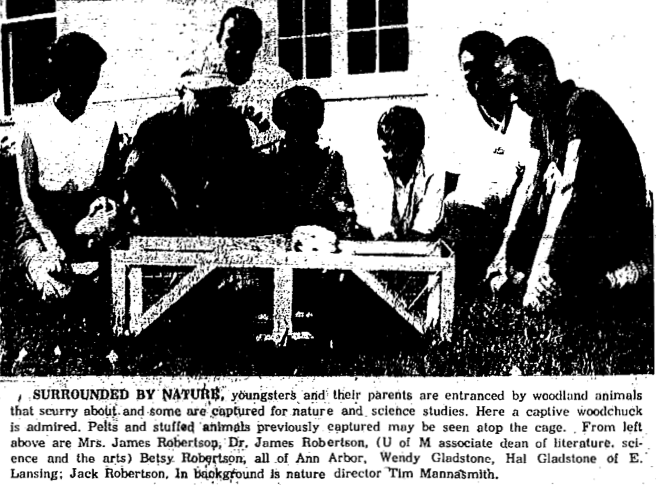 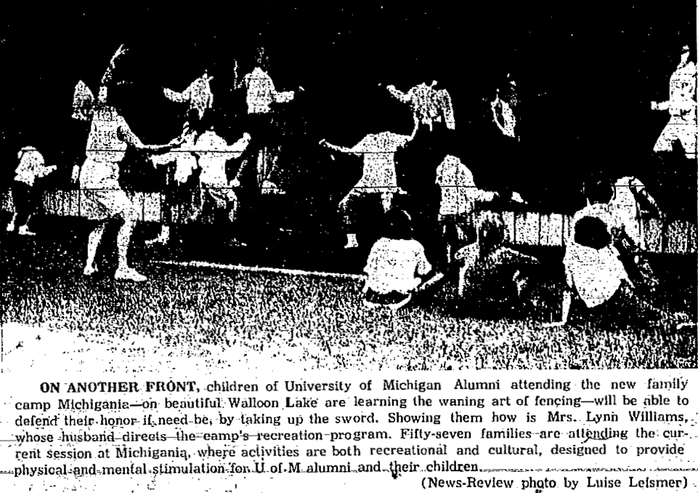 Mr. and Mrs. Glen Williams have had close ties with Camp Michigania. 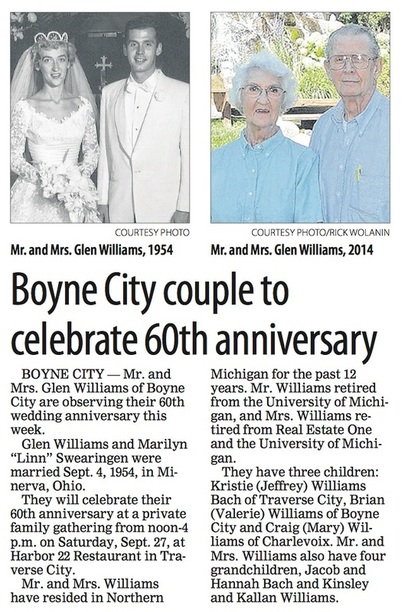 3 September 2014 ~ Petoskey News Review
Mr. Glen Williams has written (2000) and posted on the internet "A History of Camp Michigania". 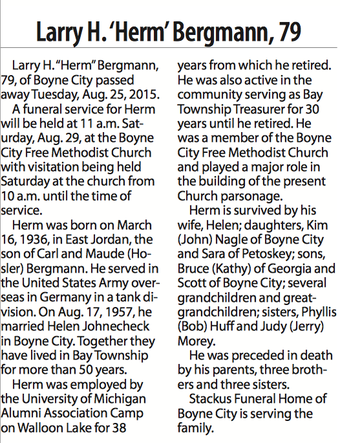 27 August 2015 ~ Petoskey News Review
Story Below posted with permission: Lauren Macintyre, a lifelong Wallooner, is a board member of the Walloon Lake Association which publishes the Wallooner newsletter three times a year. Lauren enjoys writing "Walloon Stories," for the newsletter like the one she wrote below about Camp Michigania. 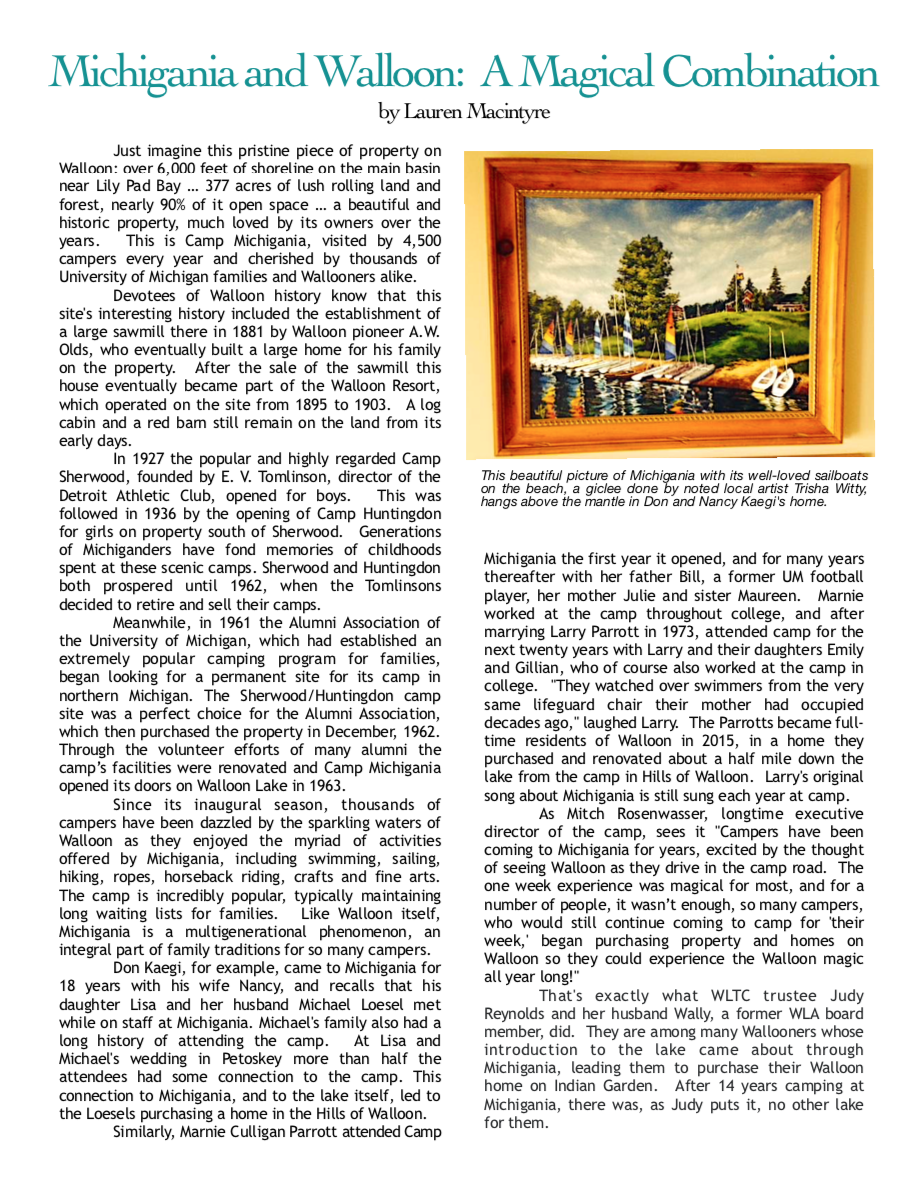 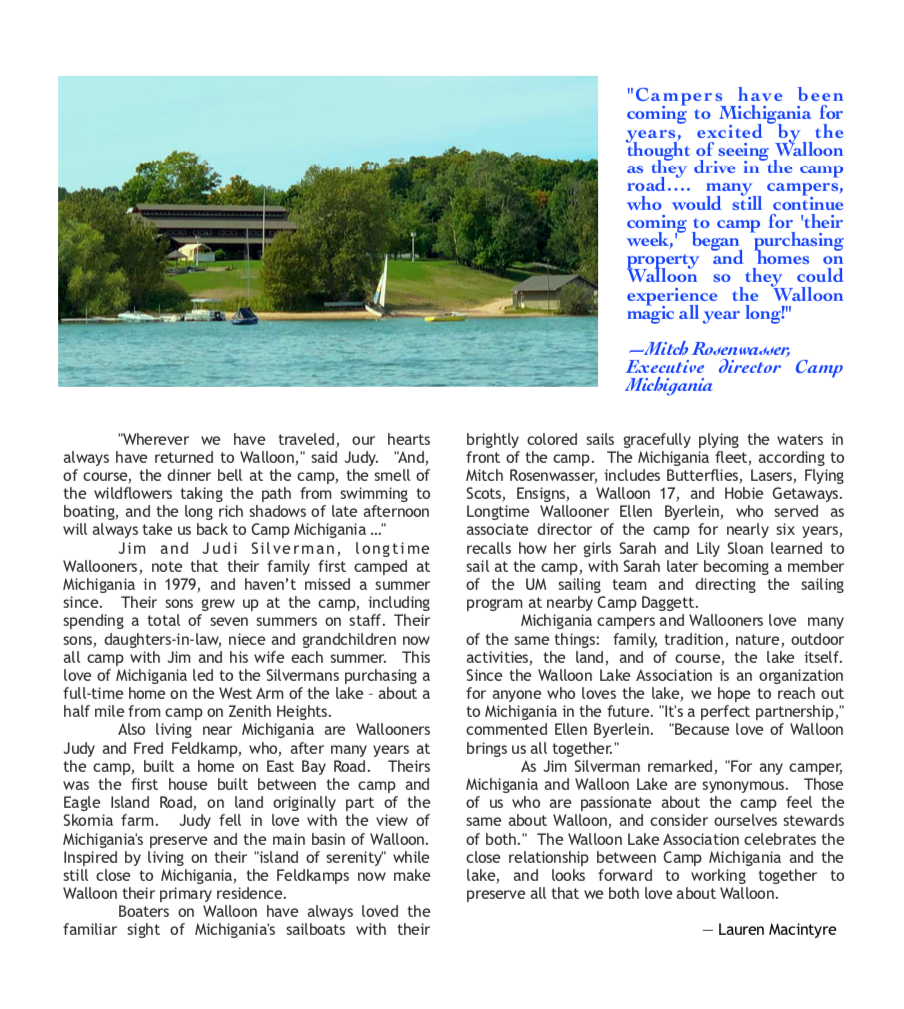