The design and compilation of the text and photos on this site are copyrighted 2014.
Most posted items will enlarge by "clicking" on them.
"Clicking" on some color highlighted words may access additional information.
1878
Bear Lake 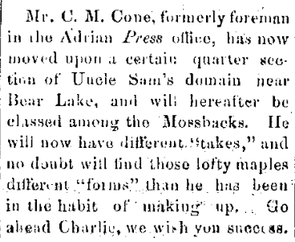 3 May 1878 ~ Emmet County Democrat
About 1883
Joseph Franklin "Joe" Winter, Jr. was born on Bear Lake about 1883. His parents Joseph and Louise Himes Winters had ten children some of whom were: Minnie, Lee, and Roland M.  Joe Jr. and his second wife Edna resided in Springvale Township on a farm on top of a hill out on Pickerel Lake Road. Edna has been described as "Happy-go-lucky", and played an accordion and sang to share her joy. Joe and his first wife Bessie Carr had several children, some of whom were: Leonard, Louisa E. (Russell), Winiford (Powers), and Doris (Gorney).
1901 Walloon Lake (and some Clarion) News Happenings

1 July 1915 ~ The Leader and Kalkaskian newspaper
1917 ~ Walloon Lake
1920 ~ Walloon Lake Renter Was Woman Swindler
The Connable Family had taken Walloon Lake as their place of residence by 1908 when Ralph Connable died.
For years the Connables had been contributing members of the City of Petoskey.
(Incorrect date of 1939 typed for extraction date for article below left) 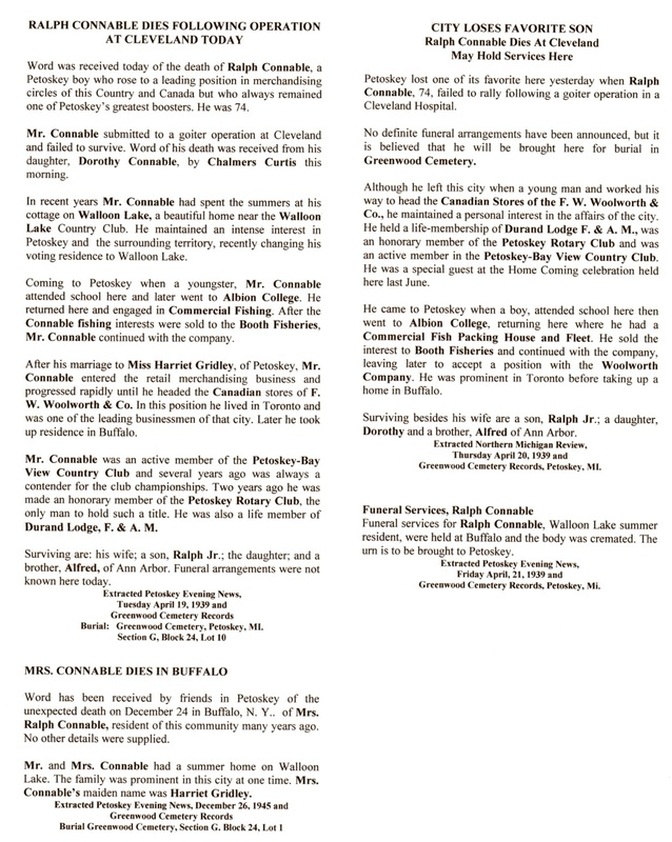 20 June 1933 ~ Petoskey Evening News
The three news articles above were submitted by Norm Stevens, and are probably from about 1939 and 1940.
Norm Stevens' mother was Eva May Hall (later Stevens) who was introduced as the WALLOON LAKE QUEEN, which was in 1939.
~ 1940 ~ 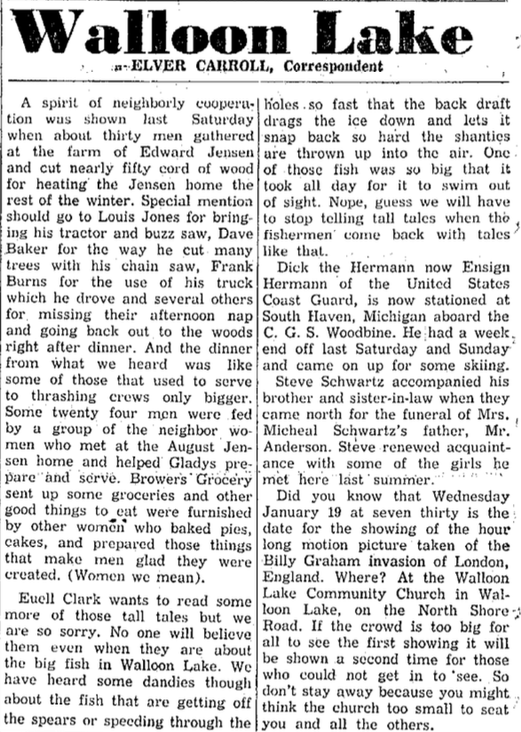 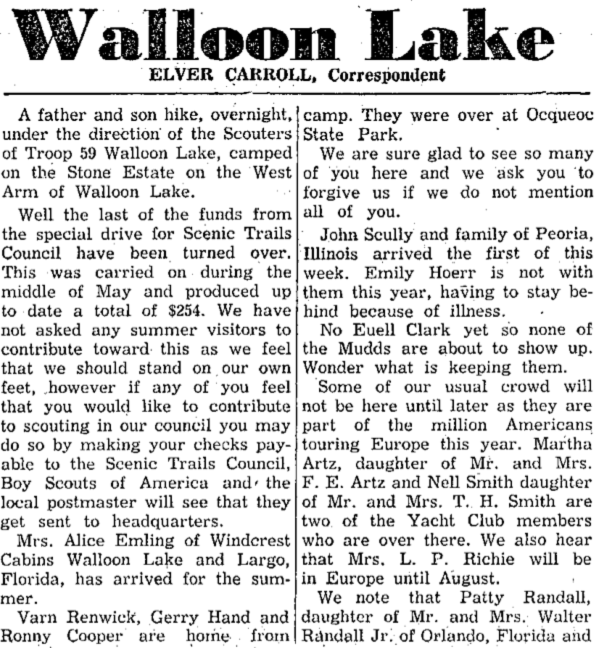 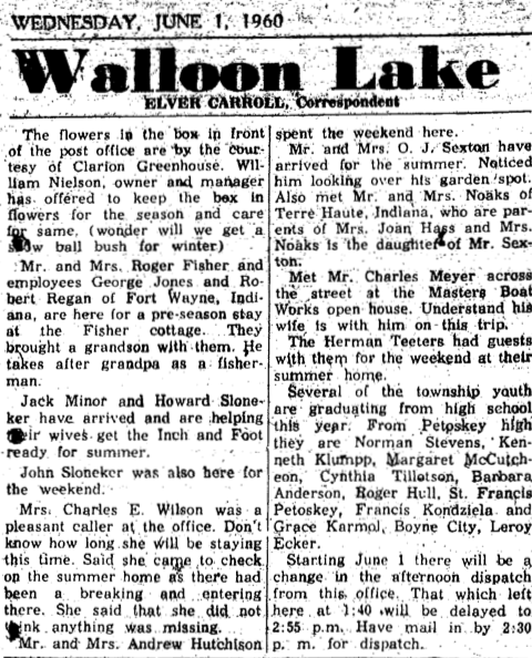 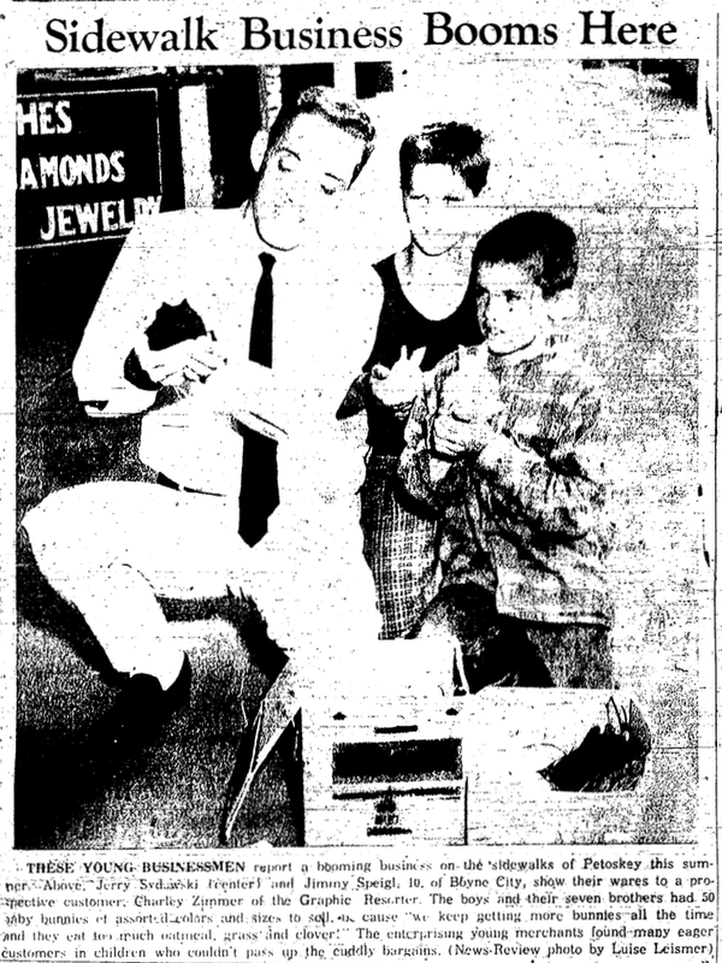 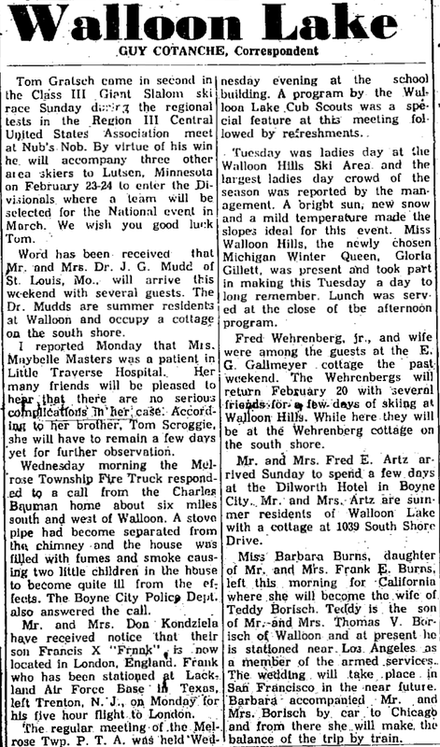 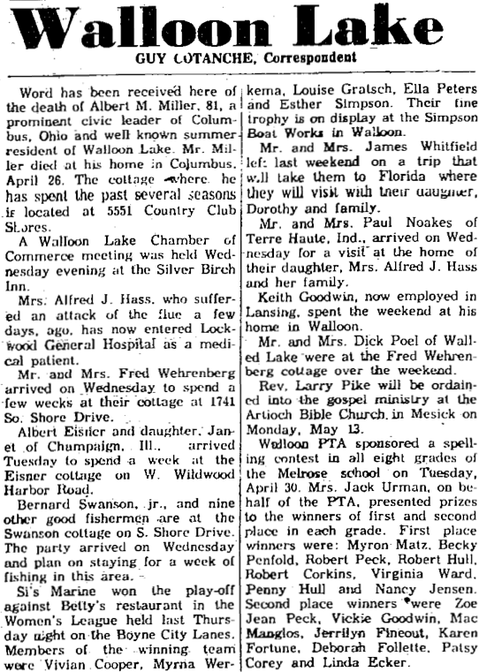 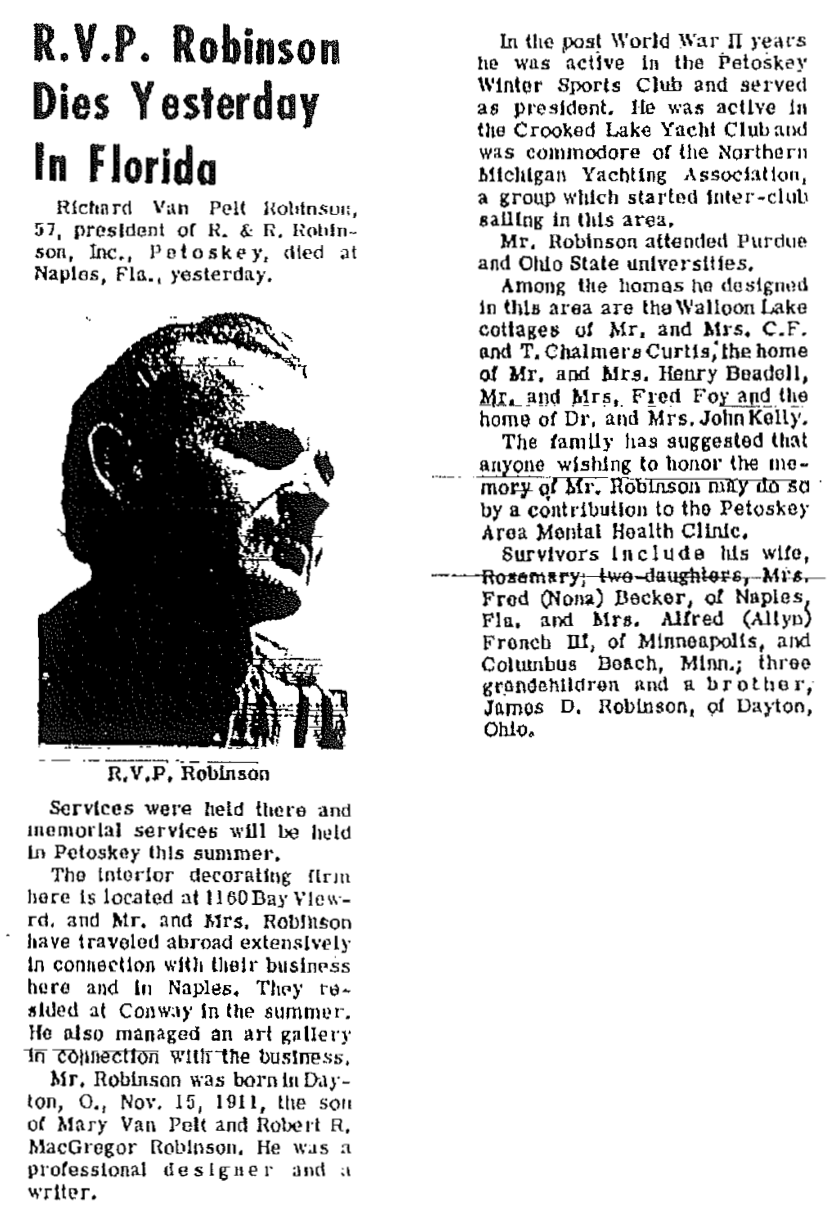 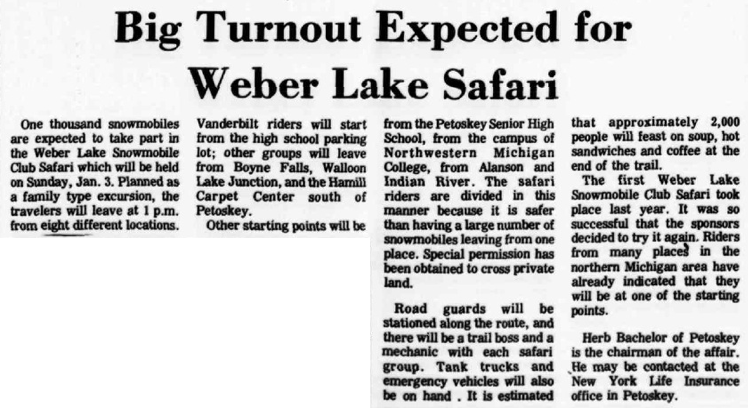 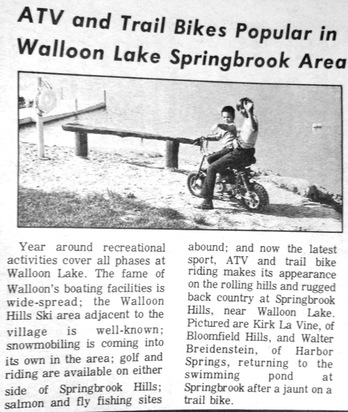 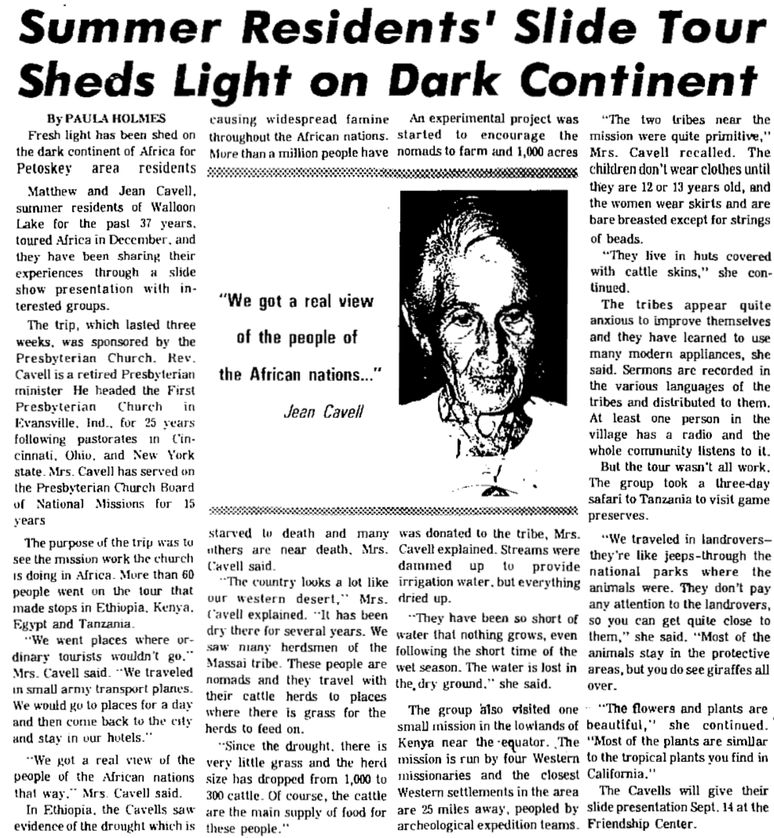 Lou Kasichke chronicled the harrowing experience in his book titled Into Thin Air.

2014 ~ Lou Kasischke Told Life or Death Experience in New Book... After the Wind 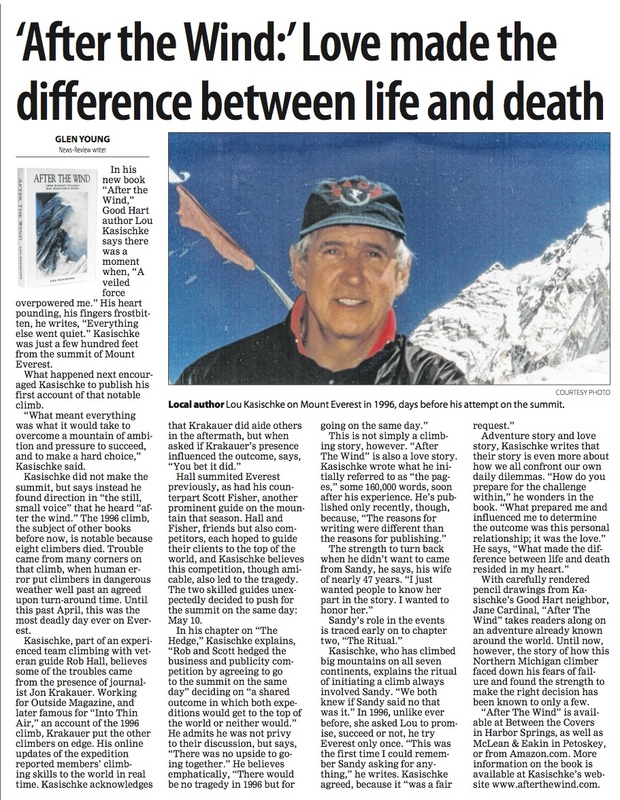 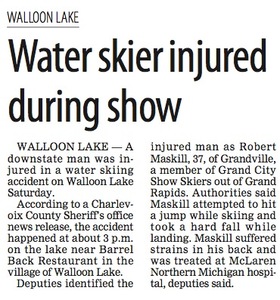 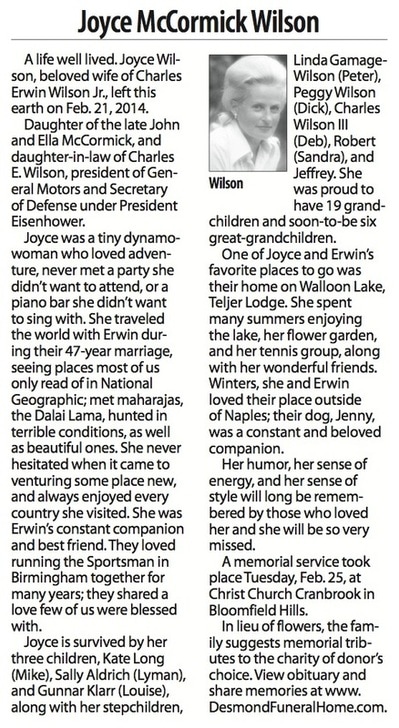 2014 ~ Petoskey News Review
Joyce Wilson was the daughter-in-law of Charles E. Wilson,
president of General Motors and Secretary of Defense under President Eisenhower.
Mrs. Charles E. Wilson attended the ceremony of the dedication of the Walloon Lake Post Office in 1960. 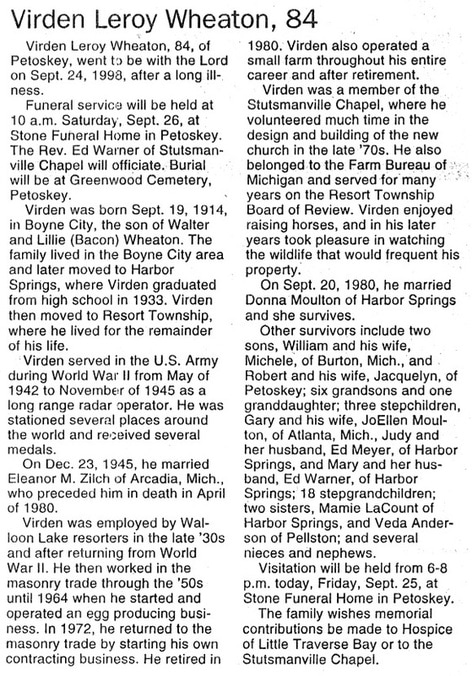 Virden Leroy Wheaton descended from the Wheaton Family that had settled on Indian Garden Road.
Virden later worked for Walloon Lake resorters in the late '30s and then after returning from WWII.

The New York Times for 30 January 2000 reported that Robert J. Eaton, co-chairman of Daimler Chrysler, had announced his retirement,
and he planned to be "Gone Fishin'". Mr. Eaton has a house on Walloon Lake, where he planned to do fishing, golfing and skiing. 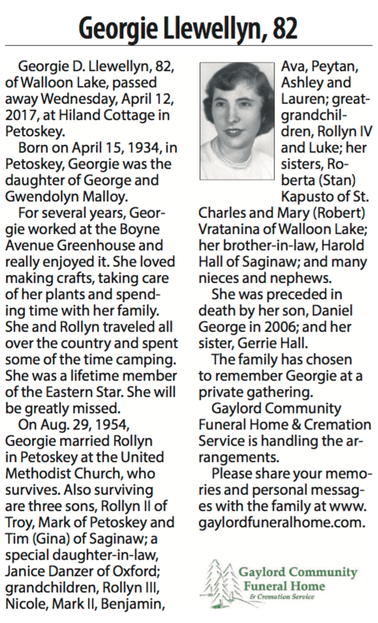