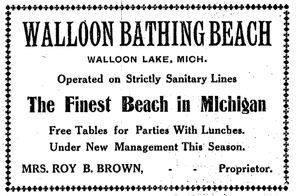 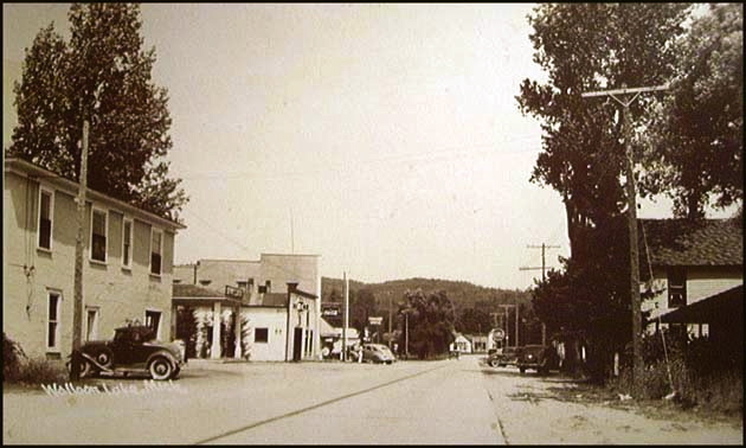 The Starr's Grey Gull Tavern front left, beside their gas station ~ Photo in the collection of Susie Sherk
In about 1908 Roy Brown had bought the bathhouse (first building on the left) and gas station (two buildings in on the left) and the Merrill Boat Livery (third building on the left). Next, Alva Frank Starr and wife Goldie, parents of Kenny Starr, bought the beach front property with the bath house from Roy Brown. Alva and Goldie turned the bathhouse into the Grey Gull Tavern. Kenny's family had lived on the upper floor of this building, above the tavern. Kenny says that he has no pictures of his ancestors because the Grey Gull Tavern in Walloon Lake MI, that his parents owned, burned with the pictures in it. The tavern burned in the 1940's after Kenny entered the Army in 1939. After the tavern burned, Alva bought the gas station property from Roy Brown. Roy Brown also owned the house by Scroggie's (near the school/church now in 2013) that Kenny and Marion Bush Howard Starr bought after they married about 1956. Susie Sherk, another Walloon Lake person, however, thought that a Maude Kleinhanz had owned the house at one time. Kenny said that that Dick Kleinhanz lived near where Dale Cooper had lived where the Walloon Lake Library is located in 2013. Kenny also said that Maude Kleinhanz may have been married to Roy Brown because Kenny remembered that Roy's wife's first name was Maude. Perhaps someone will read this and be able to eliminate some of the confusion about these memories, by contacting this webmaster??

Regarding the fire mentioned above, Mrs. L.A. Spalding who was the Sec.Treas. for the Walloon Lake Women's Guild recorded on 2 February 1940: "The regular meeting of the Walloon Lake Women's Guild took place at the Com. (Community) House Feb. 2nd. A Potluck lunch was served at the noon hour. The gathering was in the form of a shower for the Frank Starr family. They recently lost their home and furnishings by fire. The good will of the community was shown by the generous gifts which were brought. The ladies tied and furnished four comforts which were also presented to them." 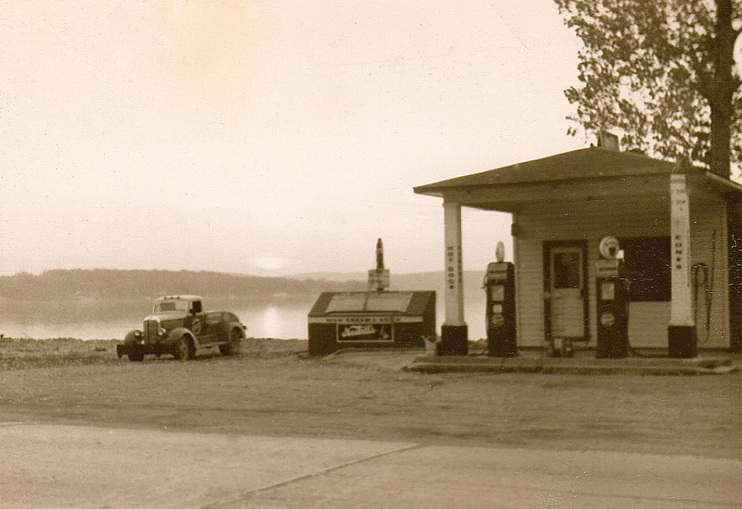 Obviously, after the Gray Gull Tavern, which had been located to the left of the gas station, had burned in 1940, leaving the Starr's Gas Station 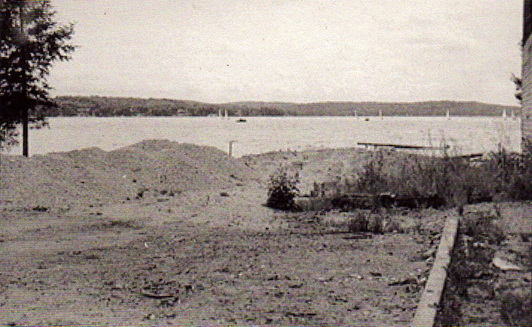 Date Unknown, but the lakeside property was vacant with a line of a foundation present 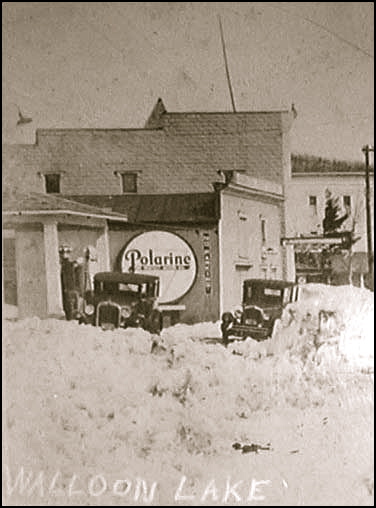 Gas Station in the Village of Walloon Lake ~ Photo in Boyne City Museum
The photo below of a 1952 Petoskey Newspaper advertisement is of the Ranney Oil Co. in Petoskey,
on the corner of Michigan and Howard streets,
but the sidebar mentions Walloon Lake A. F. Starr gas station. 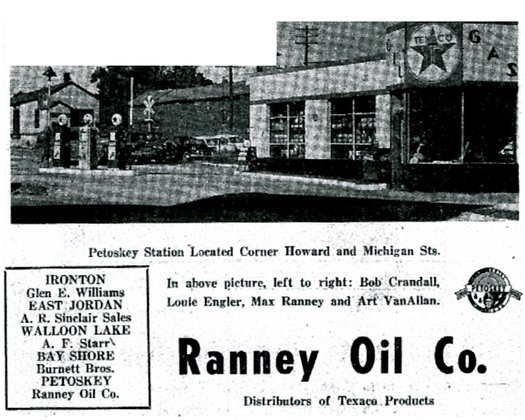 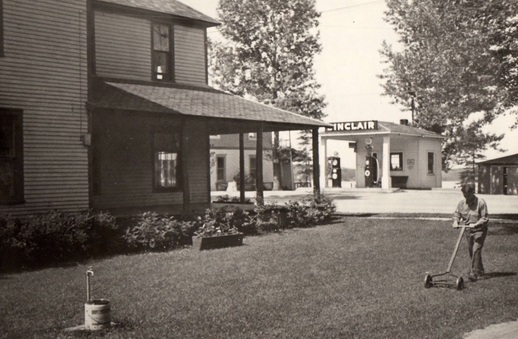 Submitted from the Collection of Ross Renwick
Photo Above: Probably Russell Spalding was mowing the yard by his parents' home which had been Sunset Lodge at one time. Across the street was the Sinclair gas station, and the Gray Gull Tavern. The gas station did not yet have the apartment built behind it.

Photo Above Left: Behind the Sinclair gas station an apartment sized unit was built where Alva and Goldie Starr lived for some time after 1940 when the Starr's previous home above the Gray Gull Tavern had burned. David Howard was shoveling the snow away from the door of the unit. The gas station roof could be seen in the right background. Photo Above Right: David Howard was shoveling snow away from the apartment, but still had more snow to shovel to uncover the snow buried car right off the shore of Walloon Lake (visible in the background). The two photos below were taken at the same time as the two photos above.
Advertisement above for "home of the 'Long-Johns'"... People arrived by car, and by boat, from all around the area, to buy my mom (Photo Above) Marion Starr's Long-John pastries. Even in 2013 I have people who remember the Long-Johns and ask me if I have Mom's recipe. Cooking has never been one of my forte's, so sadly, I do not have Mom's recipe. Consequently, even my own children and grandchildren have never been able to experience one of Mom's Long-Johns which I daily used to help fry, and flip, individually, in our deep fry cooker. What I liked even better than the long johns that Mom made, were her cinnamon rolls which she also sold at The Sail Inn. And, no, I didn't learn to make those either.--- Karla Howard Buckmaster 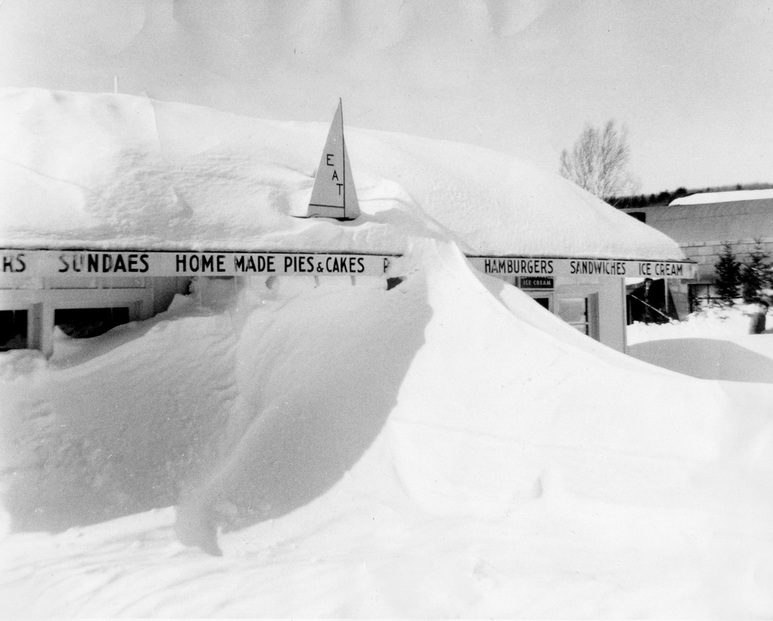 1959 ~ The Sail Inn Grill, Home of the Long Johns Was owned by Ken & Marion Starr. This photo was taken the same time as the photo above as David Howard can be seen in this photo shoveling in the background like in the previous photo. 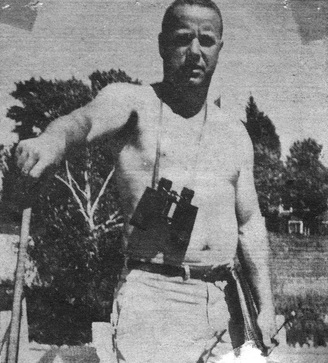 1959 ~ Will Splan worked for the Walloon Lake Yacht Club
In 1959 Ken and Marion Starr built the building in the photo above, right beside the Walloon Lake public beach, for their business called "The Sail Inn Grill" where Marion's deep-fried longs johns were a calling card to people from all around Walloon Lake. People came by boat, and by car, to buy the frosted rolls. The Starrs owned ten or more paddleboards which they stored right at the beach beside their grill restaurant. The paddleboards were rented out by the hour. The back half of the building was rented to The Walloon Lake Yacht Club which was founded in 1907 with Fred Adams as the first commodore. The Walloon Lake Yacht Club facility was used for a place of recreation for their young people. A ping pong table took up much of the space, with benches built in around the perimeter of the room and a simple pay-telephone hung on the wall. Will Splan, a wood workshop teacher with the Petoskey Public School System was employed by the WLYC to mop the brown tiled floor, monitor the space, and to "start the boat races". Will Splan passed away 16 December 2013. Many of the summer resorters set up charge accounts for their children, so the children could come in and get a 10¢ long john, a 10¢ ice cream cone, a 35¢ hamburger, or some other dietary delight, and Marion then sent a bill to the parents once a month, with never any problems from anyone.

In the Fall of 1966, Ken and Marion sold the property to Bruce and Phyllis Cotanche who changed the name to "The Beach House". They used the entire building as a restaurant. After Bruce and Phyllis had owned the property for about four years, they sold it to a Mr. Griffen, who continued to operate The Beach House, but not very long. It then had a change of outside design with a keyhole style, and a new name of The Keyhole. The Keyhole went through different businesses, like a continued sandwich shop, and a real estate office. Eventually a Dr. Webber ran an office from the building. Next Mr. Mettler through Mettler Walloon, L.L.C. bought the property, and attempted to get the permissions from the Melrose Township Planning Board to build the resort "Mettler Project" with boat housing under the condominiums, along with retail developments. That was never developed after an ensuing court case. An article titled "Developer wants to turn Walloon village into resort" noted: "Mettler has already purchased properties in Melrose Township that locals know as the Keyhole property, Shepherd property and the old Triton Marina. He has formed purchase agreements on an old Victorian house on M-75, and property on both sides of the Walloon Lake General Store. Essentially, 10 acres - 80 percent, according to Webster [Melrose Township supervisor] - of the downtown district in the Walloon Lake Village will be owned by Mettler." A 25 February 2006 Traverse City Record Eagle article gave a synopsis of the Mettler Project to that point titled "Lakeshore development project appears stalled out".

After that, Thomas Siebold & Associates, Inc. of Bloomfield Hills then, bought the property, and constructed the condominium units that are on the property directly next to the public beach in 2013. Then in July of 2012 Siebold sold the surrounding property to Jonathan Borisch who has been able to totally rejuvenate the surrounding area with various businesses, while leaving open space for the public to enjoy.

At some point in time I remember the building referred to as "The Keyhole" as a keyhole type facade was added to the front of the building. I believe that a real estate office was located in the building at one time after it was used as a restaurant.

Before Ken and Marion Starr used the property for their restaurant, it had a large building on it, called "The Grey Gull" tavern, which Ken's parents Alva and Goldie Starr had run. They and their family lived in the seven room upstairs until the building burned.

Eventually the property was cleared, and sold to a developer who built a very large condominium project on the location.  Even though the condos are very close to the main road, the view from the condos is gorgeous of Walloon Lake.

In 2015, Jason Thelen, a Petoskey MI paddleboard builder,
often feels the synergy of his paddleboard while paddling along the shoreline of Walloon Lake.
Jason Thelen expresses (in a video) his love of creating paddleboards, and his love of the Northern MI area.

The Starrs added on to the roadside portion of the building in 1963. In 1963 a full sized juke box was added along with a few booths for seating. Previously, only a long bar, with short bar stools, made for a crowded seating arrangement. The early bar seating arrangement had juke box selectors attached to the bar, but the juke box itself could not be accessed by the customers. Photo Below: Karla Howard was the waitress for her mother's business. In the background the Coke machine, the large jukebox, the corner of the ice cream cooler, the cash register, and the corner of one of the booths can be seen. 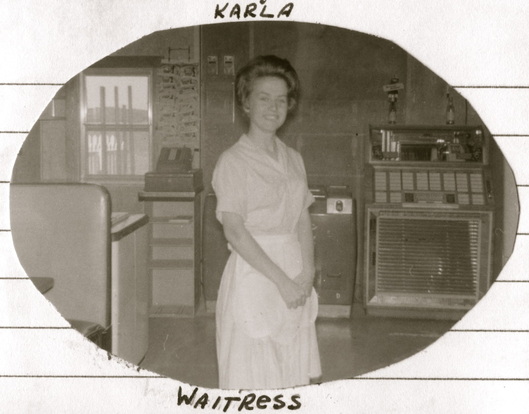 Karla Howard (Buckmaster) worked as a waitress inside the new addition on the Sail Inn Grill
Ken and Marion Starr owned the Sail Inn Grill in Walloon Lake in June of 1963 when they held a graduation party in the restaurant for their daughter Karla. Family and friends gathered where the recent addition had added booths to the otherwise stools only building. This movie was digitized from an 8mm camera film. 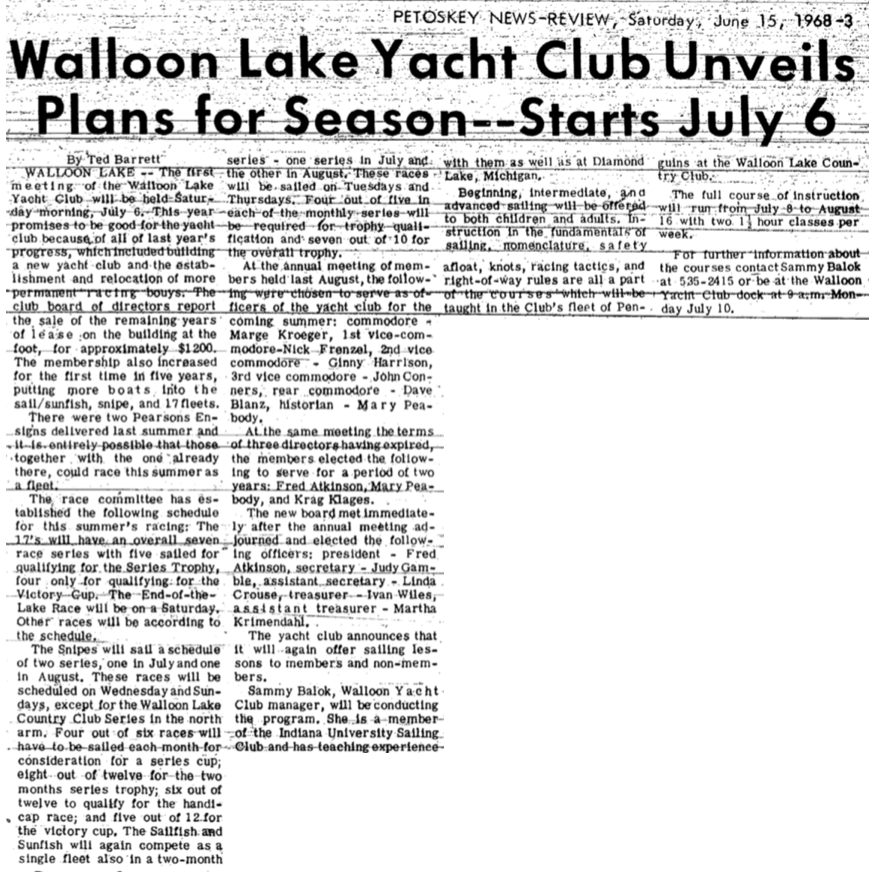 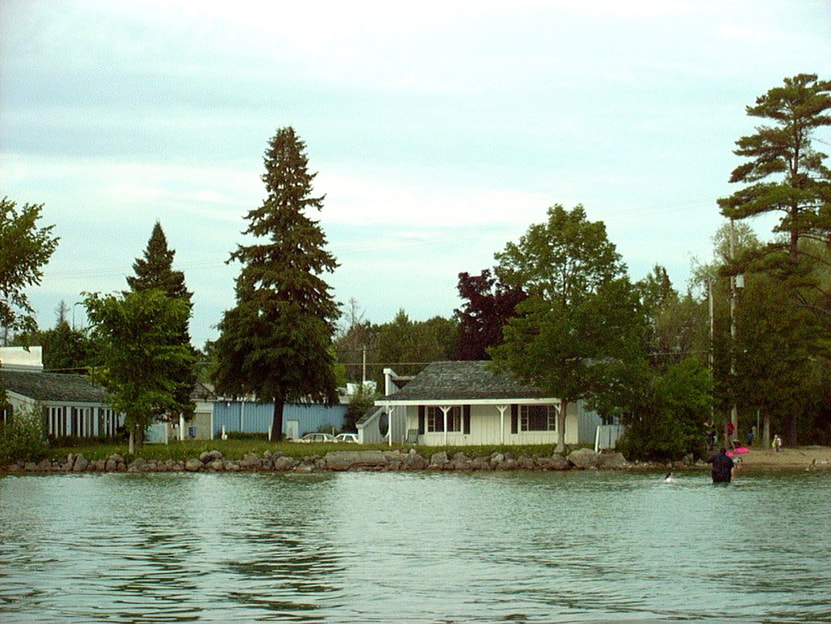 6 July 2003 ~ From the lakeside, Sail Inn Grill (With the Key Hole facade showing on left of building)
Photos of the gas station below: These are early photos of the gas station, before the apartment was built behind it.
Later on from when these photos below were taken, from about 1960 to 1963
Margaret Tillapaugh Sherk rented the gas station building, and ran her beauty shop there.
She named it Margaret's Beauty Shop. 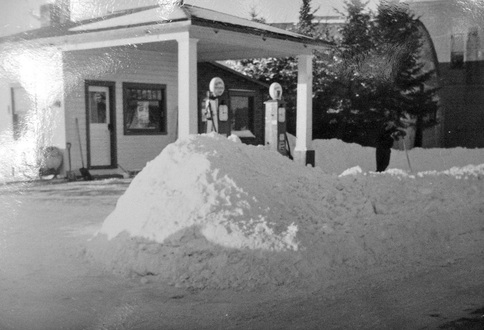 Submitted from the Collection of Ross Renwick
This photo above of the Starr's Gas Station shows that the quonset boat building was located to the right.
The Shores on Walloon Lake
Built by Thomas Seibold & Associates 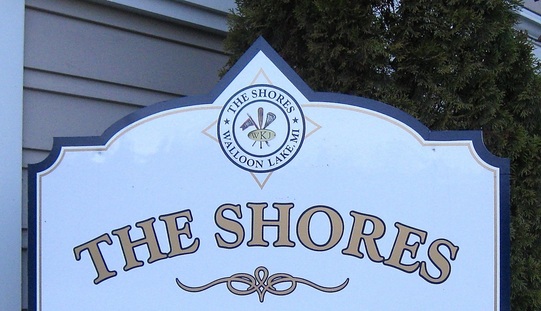 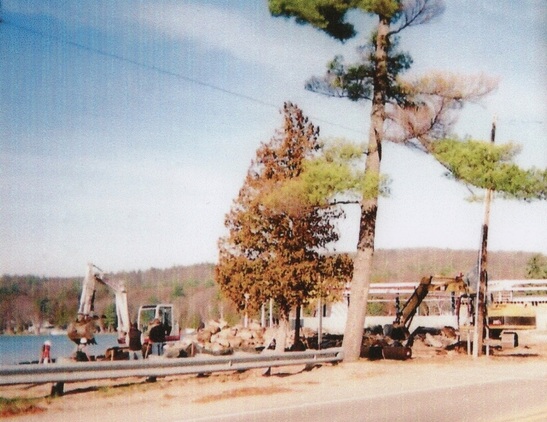 The view of Walloon Lake from inside one of the custom cottages was as pristine as ever. 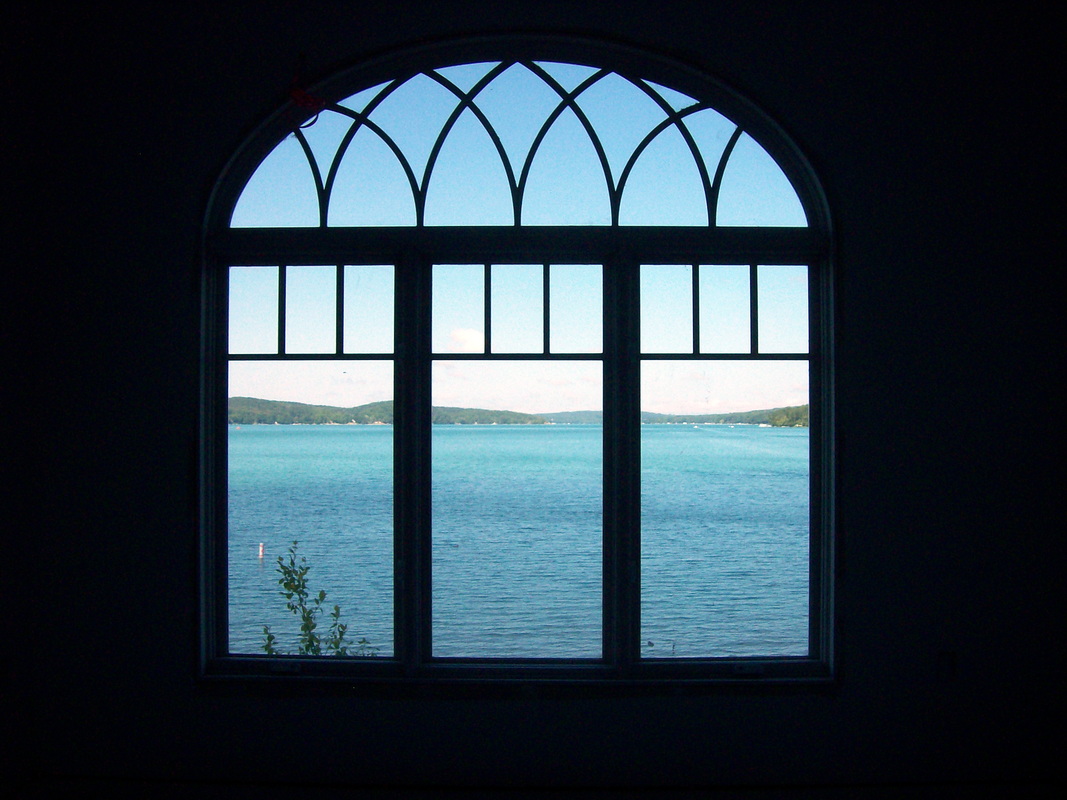 ~ 08/08/08 ~
View the surroundings Rosemary and I enjoyed while attending a Walloon Lake Community Art Show,
on 8 August 2008 in the area of the Custom Cottages, by playing the slideshow below.
18 June 2013 ~ Four Photos Below:
Top Two> "The Shores" from the docks in front of Borisch's Barrel Back Restaurant.
Bottom Two> "The Shores" roadside from the Village of Walloon Lake Community Park.
The tall pine tree right by the beach next to The Shores has been a distinct tree there, forever?
Notice in the Odalaigh photo two photos down from here... it appears that sometime between 2013 and 2014, the tree has been topped.
~ 2014 ~ 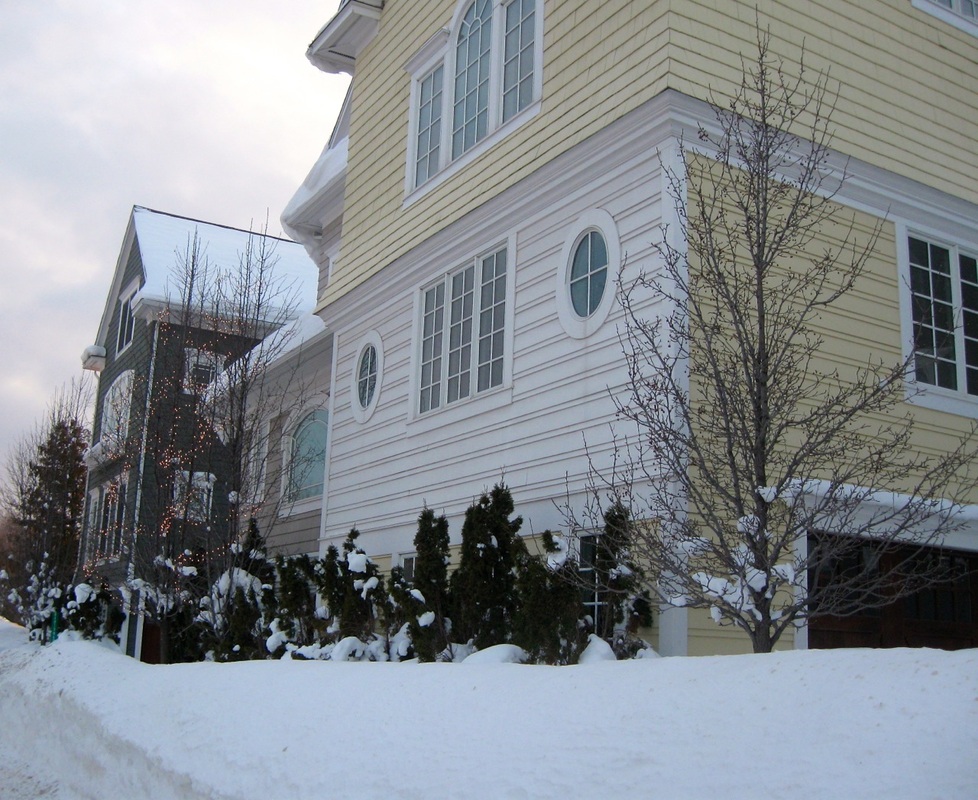 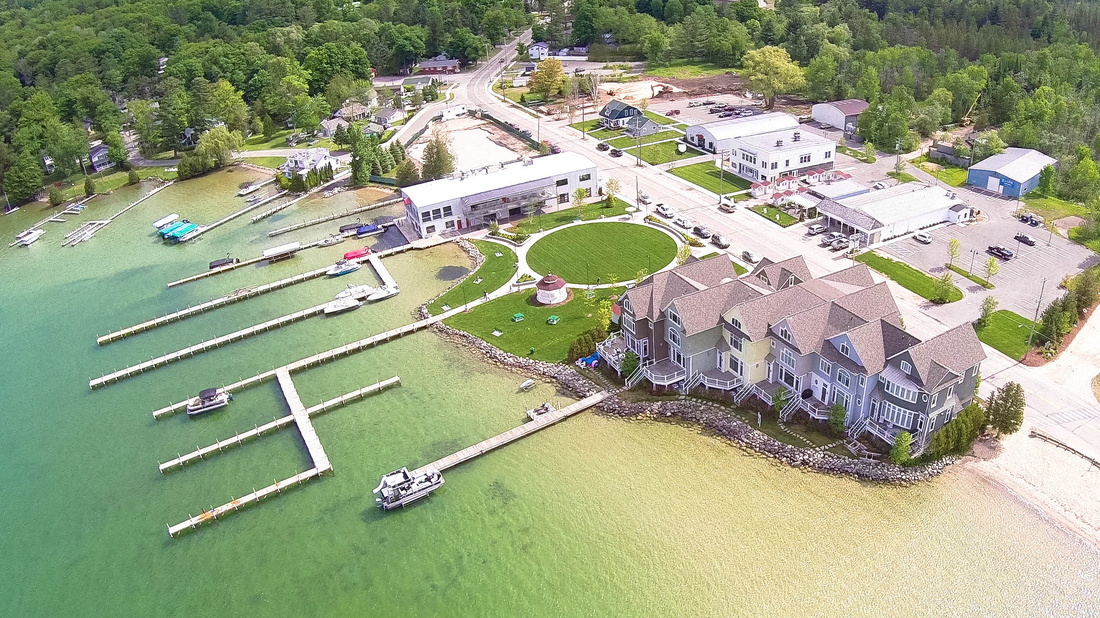 8 June 2014 ~ "The Shores" in the foreground, near the public beach
Photo Credit: Odalaigh 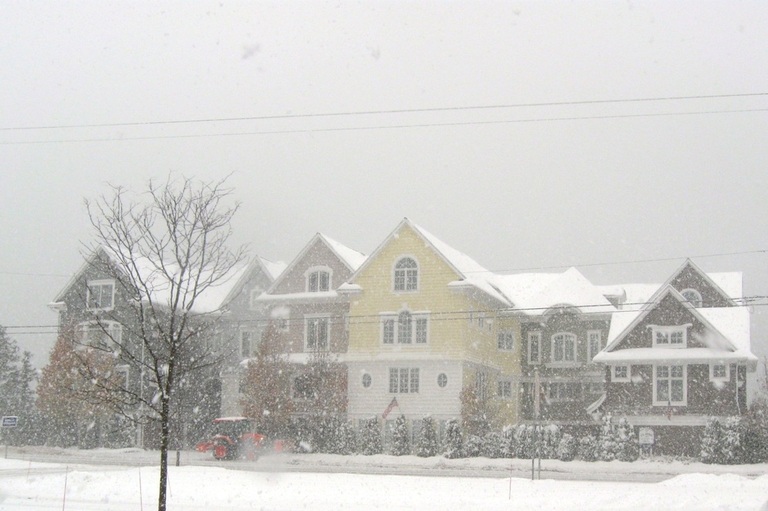