The design and compilation of the text and photos on this site are copyrighted 2014.
When Edgar H. "Gar" Lotspeich died 9 February 1999, it was noted: "In the late 70's Gar was a founder of the Walloon Lake Association Trust. He was an early trustee of the Trust and served on the Water Quality, Government Affairs and Land Preservation Committees for many years. Gar spearheaded the Association's efforts to restrict funnel development and authored the 'Walloon Clause' which was adopted by the five townships and two counties which surround the Lake. His success in getting restrictive zoning ordinances passed was followed by the assignment of Township Representatives whose job it was, and remains today, to monitor the activities of local units of government for the Association." 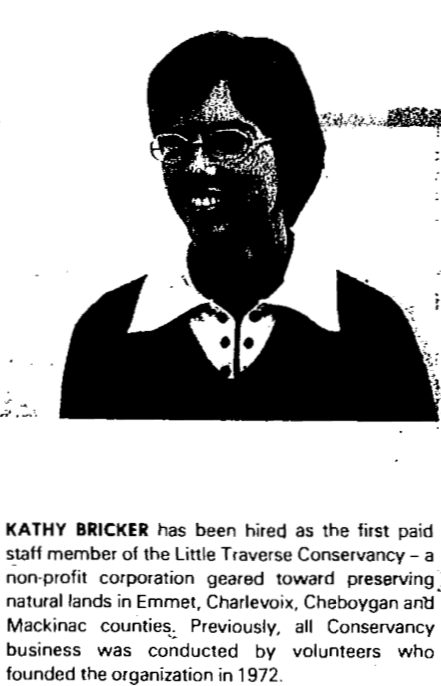 "Seeking: one full-time land protection specialist for the Walloon Lake Trust and Conservancy.

'By protecting land, that limits or eliminates development. Drainage of water is different from vacant or less developed parcels,' she said.

In total, the conservancy has protected more than 1,900 acres within the Walloon Lake watershed. The conservancy owns 41 preserves, and has coordinated 26 conservation easements.

It is these properties the land protection specialist that the conservancy hopes to hire will oversee. The potential land protection specialist will also prioritize and select properties the conservancy hopes to protect. Other duties will include developing relationships with land owners, fellow organizations and local and state governments. The specialist will also lead fundraising efforts for conservancy projects, working with individual donors, foundations and government agencies.

Finally, the specialist will develop preserve management plans and work with the organization’s land stewardship committee to evolve innovated stewardship uses of preserves.

For more information about the position or the conservancy, call (231) 347-0100, or email landprotection@walloon.org.

The conservancy’s preserves are open to the public, many with trails for hiking and other, non-motorized use. Find a map of these preserves at http://www.walloon.org" 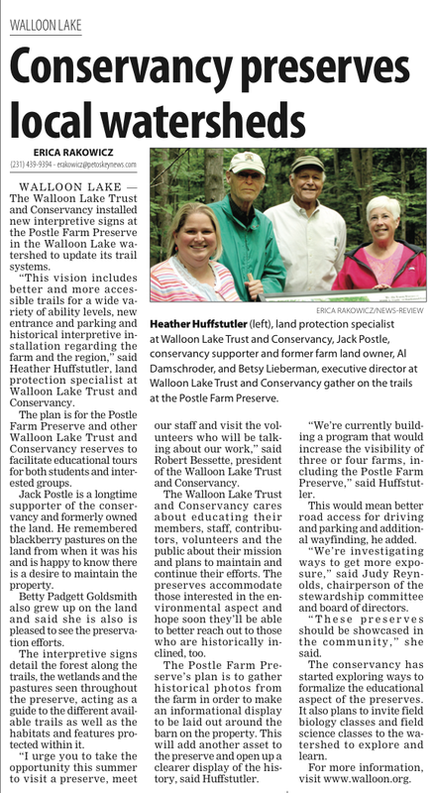 The 16 June 2016 Petoskey News Review reported that the "Conservancy Dedicates New 12 Acre Preserve." The article explained the importance of this preserve for Walloon Lake: Heather Huffstutler, land protection specialist for the conservancy stated, "Creating the Pattengale Neuman Preserve was important to the WLTC because the property contains two high ridges that filter water for the Walloon Lake watershed. This land also contains a corridor or 'greenway' that provides habitat connectivity for native wildlife"

The 22 March 2017 Petoskey News Review reported that "The Walloon Lake Association and the Walloon Lake Trust and Conservancy recently named Josephine Roberts as their new executive director... the two groups work in tandem to serve and protect the Walloon Lake watershsed so that it can be enjoyed in perpetuity."

Brice Toland Voran, who served as President of the Walloon Lake Trust and Conservancy, and later Chairman of the Land Preservation Committee passed away 18 September 2018. Brice and his wife Chris were married in Walloon Lake 24 July 1983.
The 2 May 2019 Petoskey News Review reported an article titled: "Vote Coming on Walloon Lake Groups' Possible Merger." The two groups include Walloon Lake Association and Walloon Lake Trust and Conservancy. "Association officials noted that although the two organizations share similar missions and goals as well as staff, they exist as two separate entities with separate boards." A team of members from both groups "concluded that a merger would create greater staff efficiency, improved programming, enhanced communication and an equitable sharing of assets" among other benefits. The full membership will have an opportunity to vote before going farther in the process.
The 17 May 2019 Petoskey News Review announced "Walloon Lake Association approves merger". “It’s a great day for Walloon Lake,” commented association president Lauren Macintyre. 'With our 932 families who are committed to the preservation of Walloon joining the trust, with its 46 preserves and 2,000 acres of ecologically significant habitats, it can only mean wonderful things for the lake.'"
"The new organization, to be called the Walloon Lake Association and Conservancy, must now be approved as a nonprofit organization by the state of Michigan."