The design and compilation of the text and photos on this site are copyrighted 2014.
Most posted items will enlarge by "clicking" on them.
"Clicking" on some color highlighted words may access additional information.
By TRAIN and By BOAT 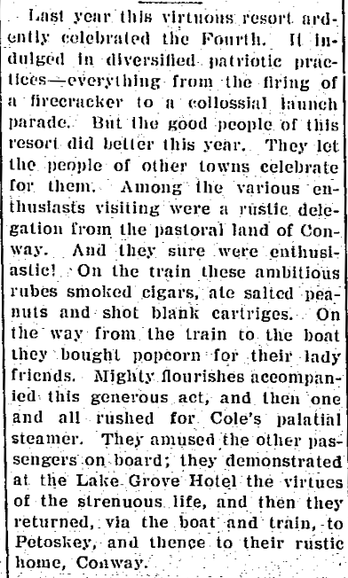 6 July 1908 ~ Petoskey Evening News
Picturesque Walloon published 1911 described on page 12, THE VILLAGE:
"A quiet little hamlet surrounding the G.R. & I. station and steamboat landing, consists of three stores, a bowling, bath house, boat livery, boat factory, four hotels, two churches and post office. A beautiful spring of pure, cold water, one hundred feet above the village, has recently been tapped and piped to the business portion.
We do not boast of electric cars, paved streets and patrol wagons; we have nature's highways and byways leading through the quiet woods, or by the lake---a perfect body of water on which public or private boats may be run whither they will. No dust, no smoke, no noise---just nature's paradise."
"The first time my folks drove to Walloon, I think in the late 1920s, it took them four days. In those days, there were only terrible dirt or sand roads. You need a shovel in the car. Most people took the train to Petoskey."
AND
"My grandparents and family took an overnight through-train from central Indiana. At the Petoskey train station, they changed to what I always heard referred to as the “dummy train” which went out to Walloon Lake village, at the foot of the lake. Then they loaded all their trunks onto one of the steamer boats, such as the Tourist. It took them to the Lake Grove Hotel dock, then onto a boardwalk to their first cottage, about the 7th cottage north of the Lake Grove Hotel. After 1907, they got off at the Baer’s Den Hotel dock and again walked on a boardwalk to their newly built cottage, the 5th cottage south of the Baer’s Den Hotel. (The Baer’s Den Hotel burned down in 1925, but the Lake Grove Hotel operated into the 1960s.) In those days, the social life centered around the hotel communities. Sunday dinner was usually served and attended by many of the “cottagers” followed by visiting and games fro the kids. Once a week, the hotel would take the men to town shopping for groceries and other necessities-usually an all day trip by horse and wagon. The women had occasional tea parties for their friends, who all dressed up in their best. The ladies always had on long dresses and the little girls, even when playing, wore dresses."
~ Barbara (Ice) Smith 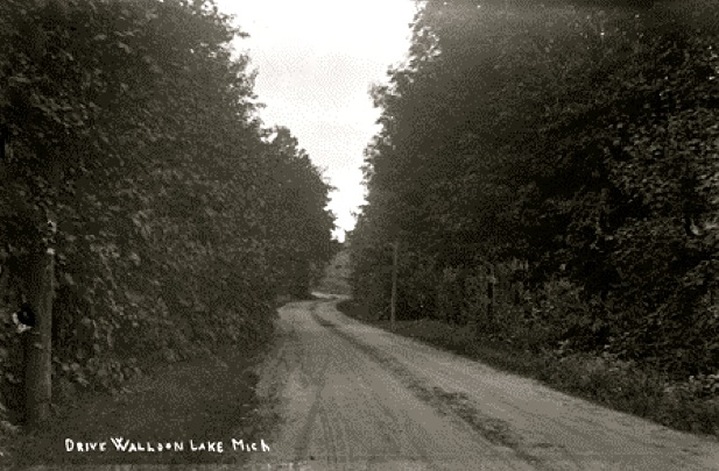