Most posted items will enlarge by "clicking" on them.
"Clicking" on some color highlighted words may access additional information.
Evangeline Township Charlevoix County Officials

Points of Interest on the South Arm
Aircastle Point
Prominent Point: Air Castle Point, owned by Mr. A.W. Barnum of Chicago, commanding two beautiful bays and has the distinction of being perhaps the most prominent point on Walloon Lake (now Randall's Point... see farther below)
Muhqua Nebis  A compilation of Legends of Walloon by Dorothy Munson Krenrich published by Walloon Trust on page 75 told that prior to 1903, for Aircastle Point the residence was that of Judge Barnum of Chicago, but was sold after his son's mysterious drowning in Walloon Lake (see articles below about the son's drowning). After Judge Barnum's ownership, Aircastle Point was first sold to C.E. Schell and then to Mr. and Mrs. Randall. 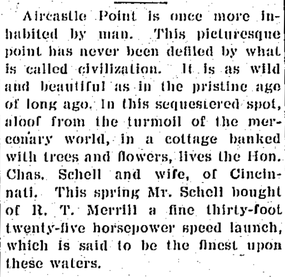 "Aircastle Point: The site of the handsome summer home of Attorney C.E. Schell, of Cincinnati, is one of the show places of the resort region. This "V" shaped peninsula, extending north into the main body of the lake, has been improved by a modern commodious cottage, caretaker's cottage, large garage, boat house, waterworks engine house, stables, and all things to complete enjoyment on land and water. The cottage is beautifully finished and furnished and contains two large old-fashioned fireplaces and all modern conveniences. The main cottage is near the apex of the wind-swept point and the surrounding trees have been removed only enough to permit a fair sized lawn, a tennis court and some rose arbors. A splendid garden and thriving orchard adjoin the caretaker's cottage, and the rest of the estate, with its magnificent natural forest, stands as when occupied by the aborigines, except about twenty acres that have been half marked by a cutting out of the undergrowth, sowing with grass seed and the making of some bridle paths connecting conveniently with the old Indian trail along the east shore."
Lakeside 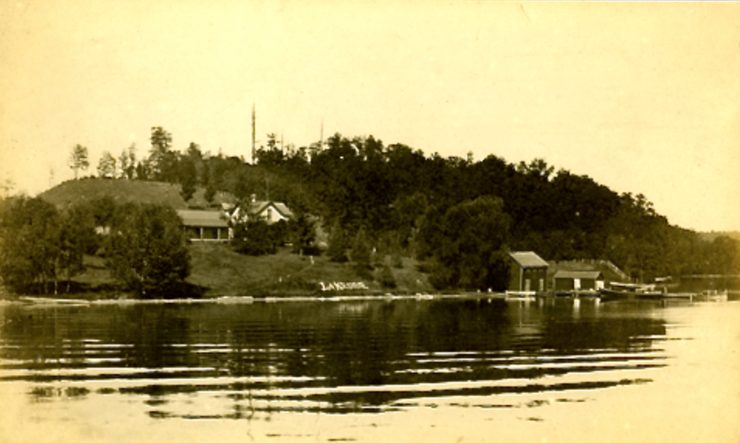 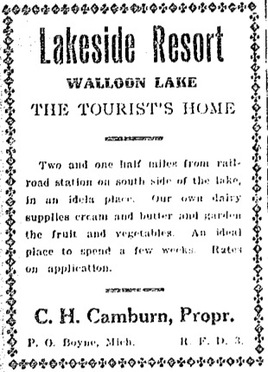 Lakeside was owned by the steamboat captain C.H. Camburn, and became Lakeside Resort... catering most to fishermen. It was located across from Indian Garden Point. In 1918 Lakeside burned.

Lakeside Resort's proprietor was C.H. Camburn the steamboat captain for Tempest. Lakeside Resort was located two miles from the railroad dock and near the best fishing grounds on the lake. (This information was from articles written by Mrs. D.H. Reycraft and which originally were included in a report she presented at a meeting of the Lockwood-MacDonald Hospital Auxiliary in Petoskey MI.)

The 6 July 1910 Petoskey Evening News stated: "Lakeside is under the same management this year as last, and is prepared to entertain its guests in the best possible manner. The additions to the farm and the poultry stock make this place a very desirable spot for the tired tourist looking for rest, or the pleasure seeker in search of country life. The best fishing grounds on the lake are near this resort."
McKercher/Jacobs/Brady/Manchester

6 August 1910 ~ Petoskey Evening News
Photos Above (Left photo copied from a glass plated print): The Manchesters own this Walloon Lake property on Shadows Trails Road in 2014, after having renovated the cottage in 2013. They live in it year around. Their goal was to keep it as original as possible, including the tin ceilings and the original pine floors. The porch remains original, and other than missing a few trees the yard is still the same. The boat house is long gone. The present owners purchased the house from the Brady Family. They had been told that the house was built in 1913, so they feel is it possible that the house may have belonged to F.B. McKercher of Walloon Lake who had placed an advertisement for a boat motor in the Reynolds Motor Boating magazine in January of 1912.

From an 18 August 1960 Anderson Herald newspaper article it seems that Mr. McKercher was the son-in-law of Dr. Waldron [See more information about the Waldron Properties below on this same webpage.]. In the article written by Jane Toner Scott, she stated that "Mr. McKercher sold us our cottage on Walloon Lake, and we all loved to listen to him talk of his fabulous and active life."

Please make contact if anyone has any additional information about this property.
Marypont
Previously owned by Mary Pontius Steinman

Located at 1125 South Shore Drive, Walloon Lake, Michigan...
Marypont, located on the South Arm on Shadow Trails end was owned by Mary Pontius Steinman.
Mary ran it as a lodge in 1949/50/51. The lodge served three meals a day, unlike B&B's. 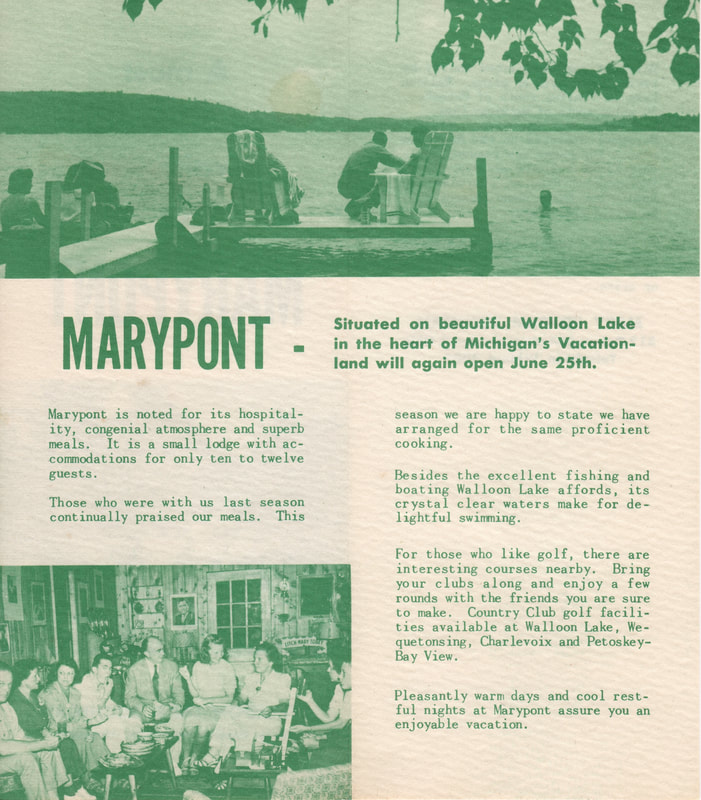 Brochure Inside Pages: Tobey Steinman submitted the brochure through Katherine McCune to be viewed only on this Walloon Lake Wanderings website.
Mary Peabody Cottage

11 May 1963 ~ Petoskey News Review
Pritchard Cottage
Frank Pritchard died 4 October 2014, and his obituary stated: "The Pritchard legacy in the Boyne region dates back to the 1930s when Frank’s father established the original Pritchard cottage on Walloon Lake in Wildwood Harbor. Frank continued that legacy with his own family, eventually building his home on the South Arm in 1966.
An avid skier since his childhood, his love for skiing was only exceeded by his love for his wife and family. Frank was associated with Boyne Mountain Resort from its inception in 1948. He volunteered on Boyne Mountain Ski Patrol for more than 34 years, beginning in 1959, rising to director in 1974, until he stepped down in 1993. During his second career in real estate sales, he worked extensively with Boyne Mountain Resort in the early days of its development projects."
Randall's Point
The Randall Story
Randall Made Knives ~ Randall History 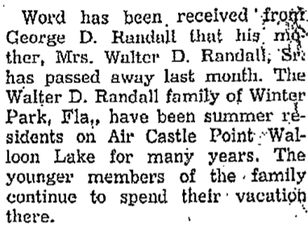 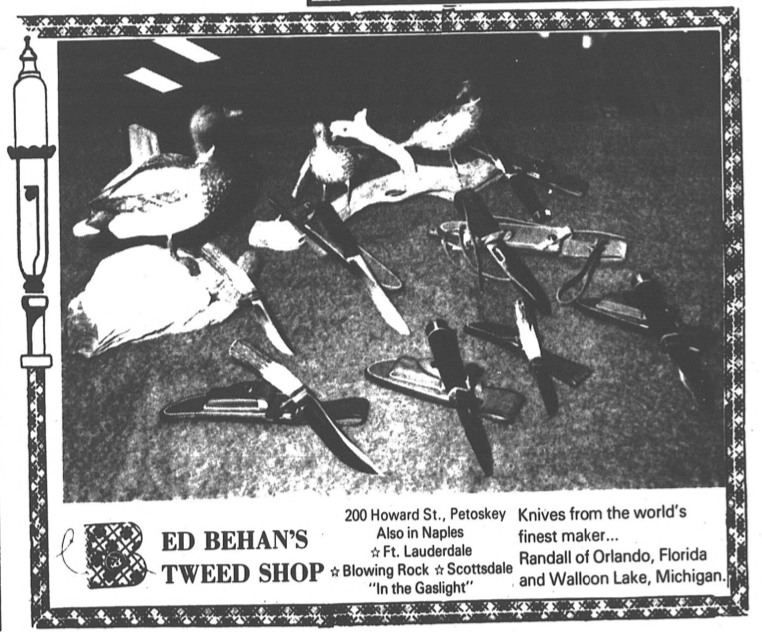 8 July 1982 ~ Petoskey News Review
On the back of the photo below was written: "By Pansies toward Todds". 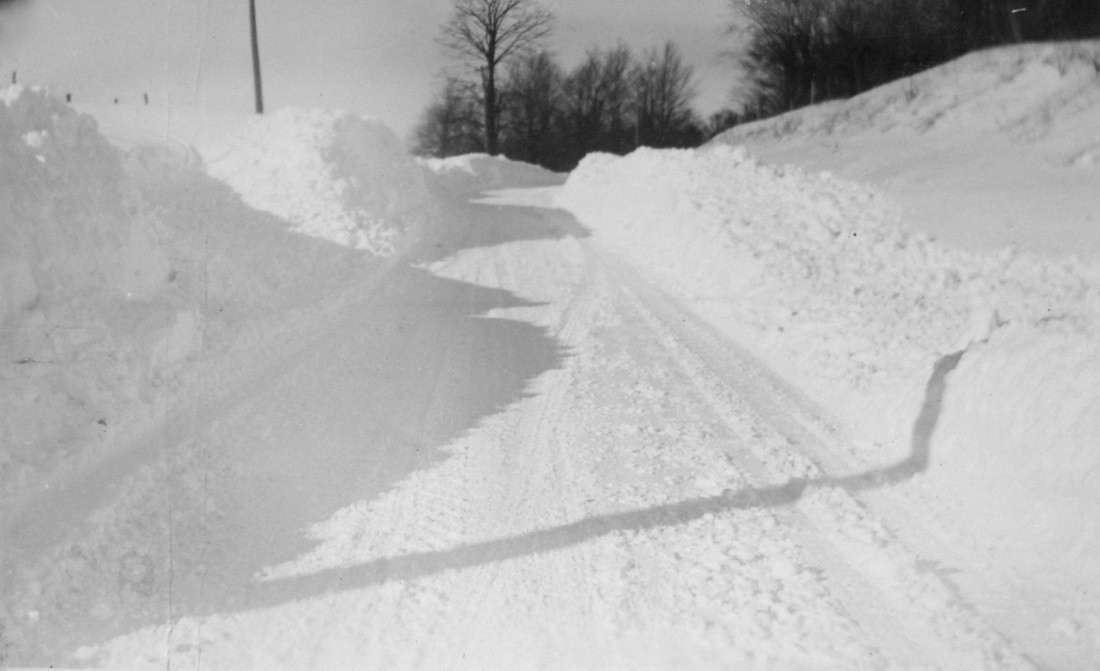 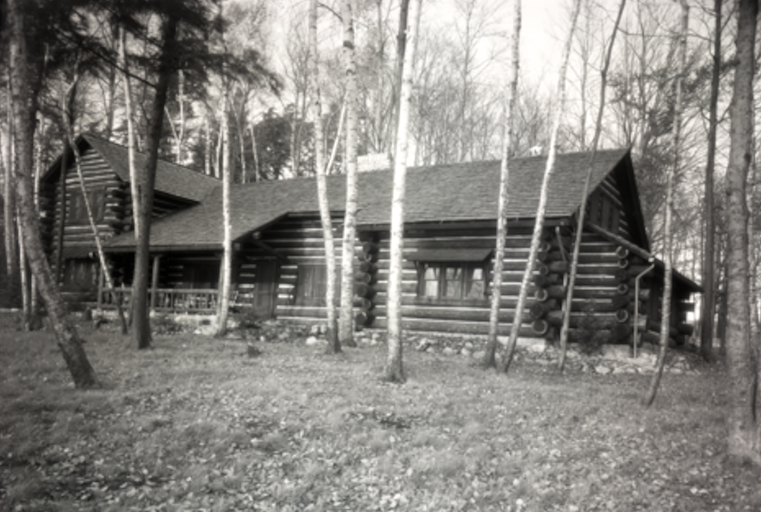 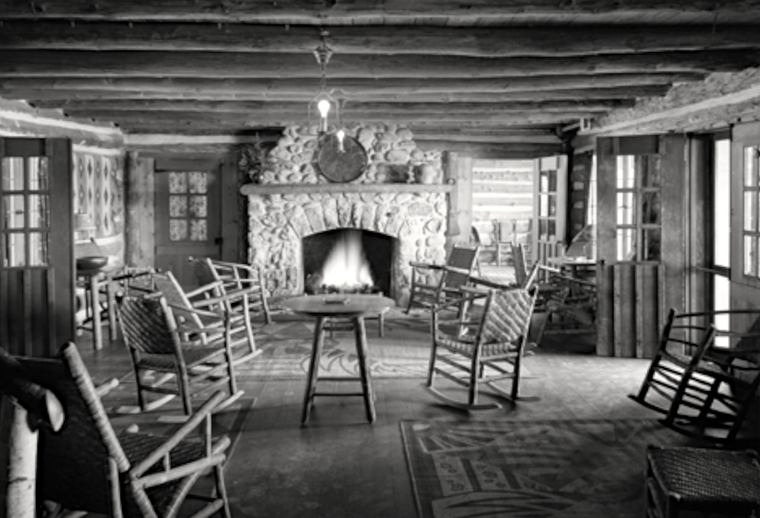 Shadow Trails Inn Interior
Shadow Trails Inn ~ The Lodge was built in 1909 as a hunting lodge, and has been hosting vacationing families when the lodge was converted in 1918 to Shadow Trails Inn and operated by Edward C. Toner. Beginning in 1979, Dorian Adgate bought the Inn, and it was managed by names such as Chuck Moll, J.T. Scott, Dee Adgate, and Bud Neidhamer. The two pages below of the pamphlet for Shadow Trails Inn were submitted by Mary Erb . 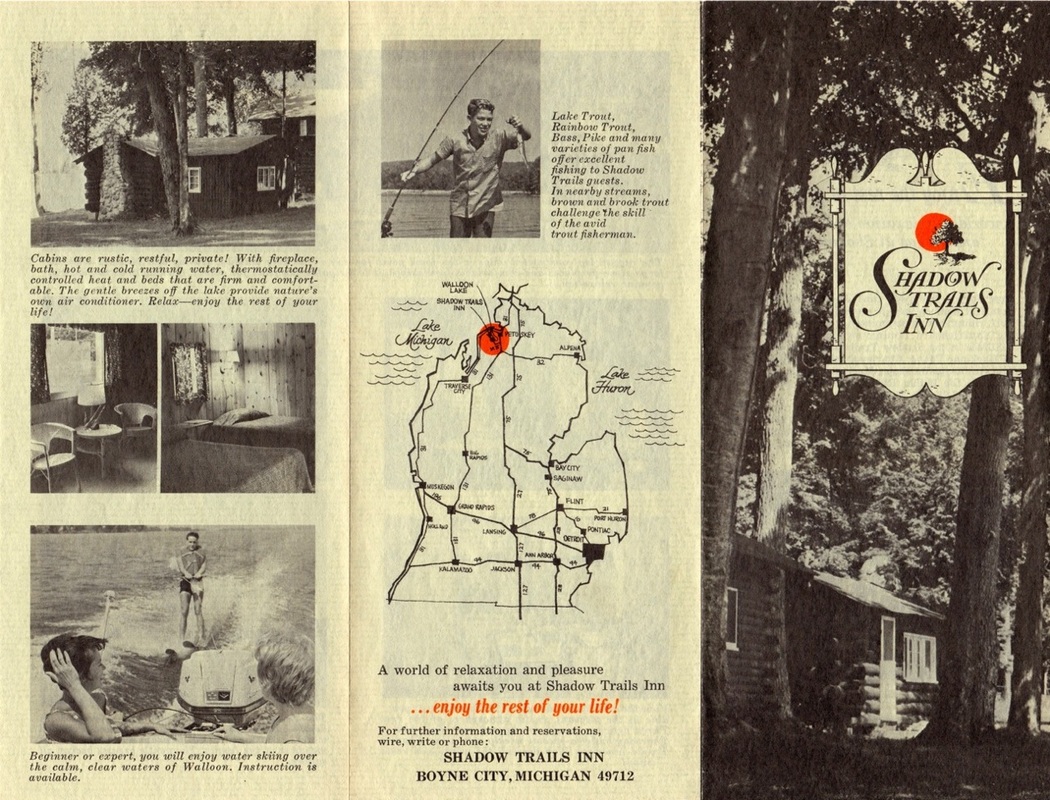 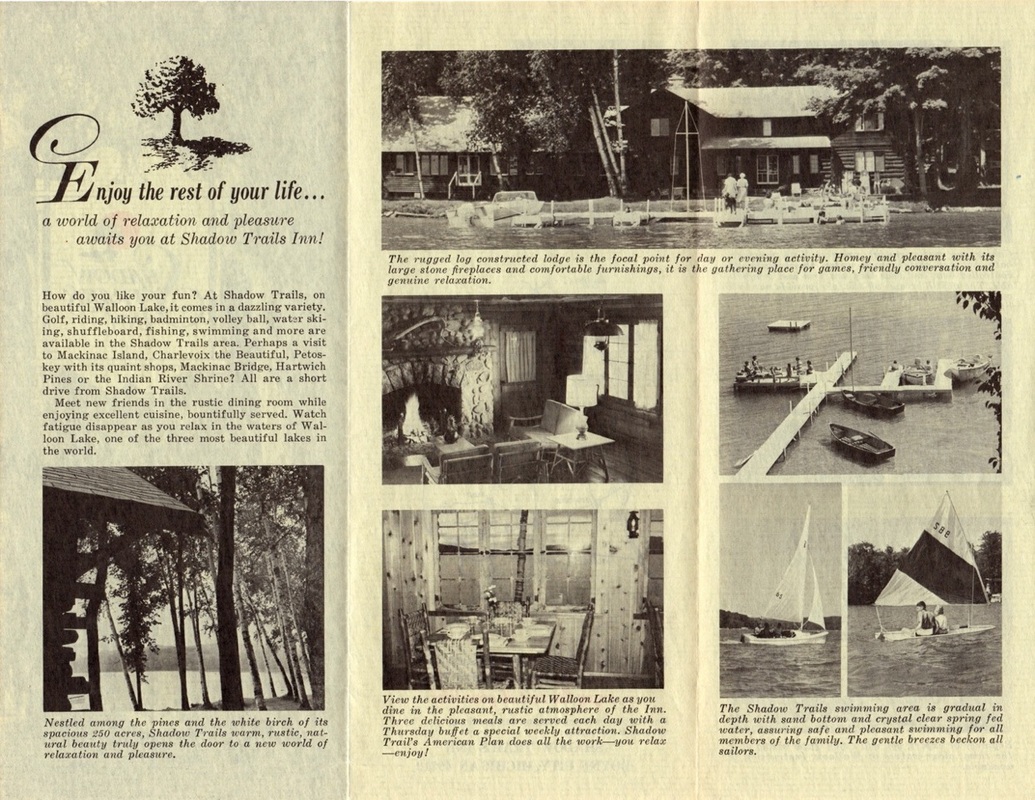 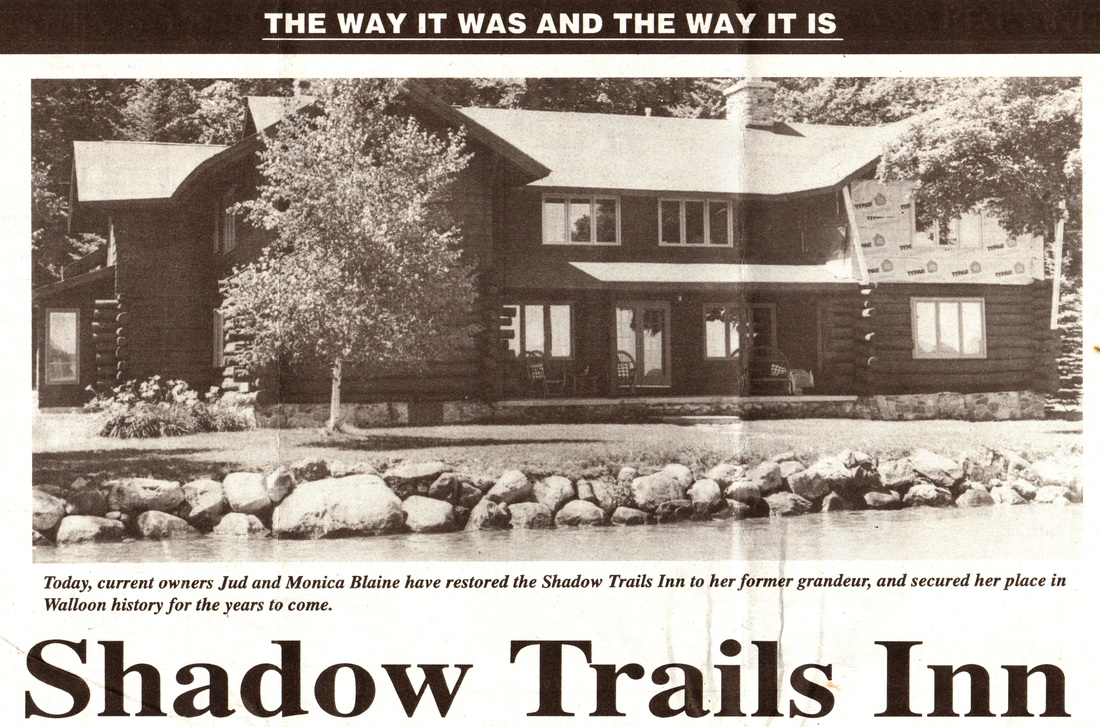 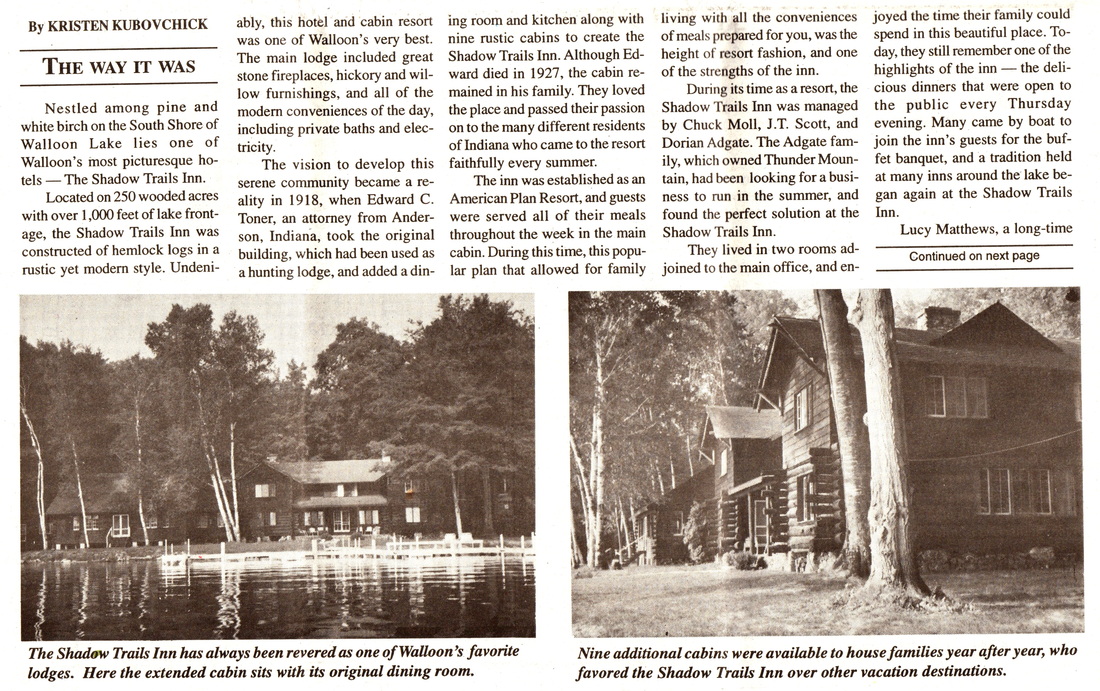 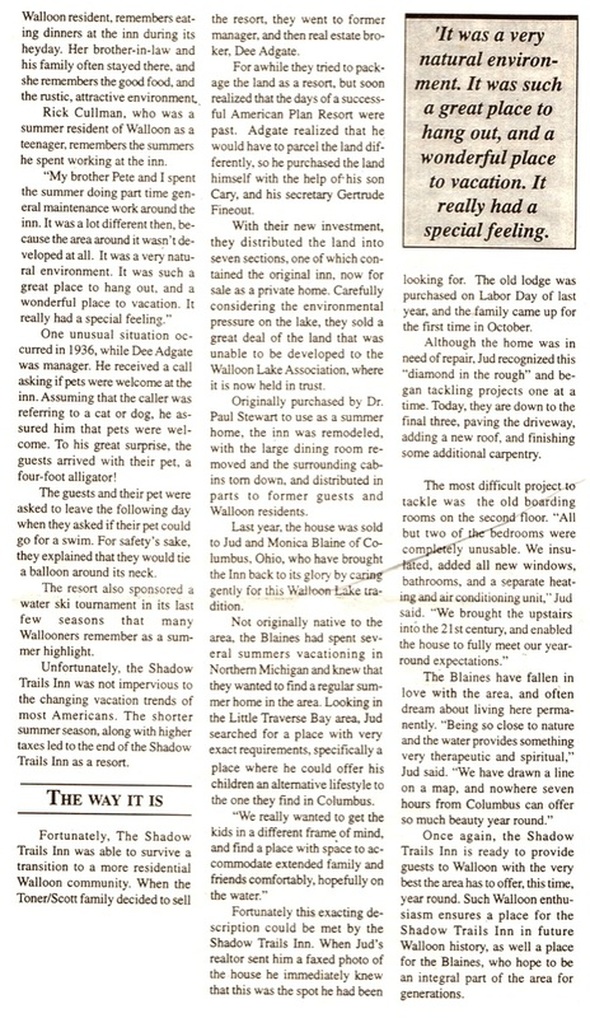 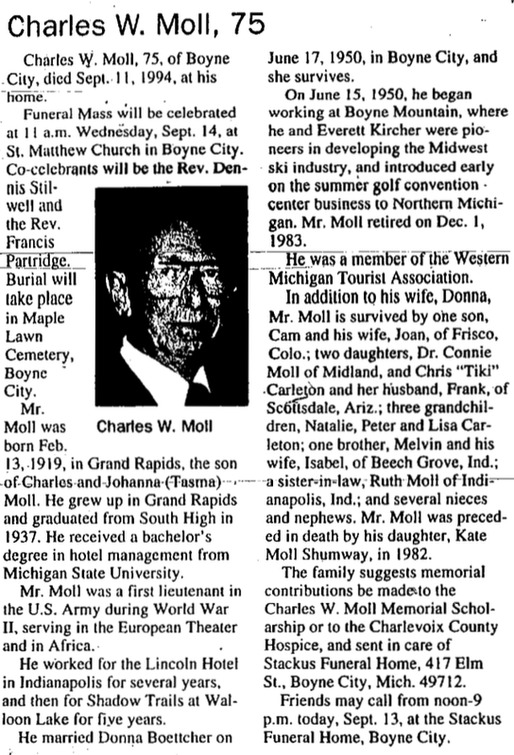 13 September 1994 ~ Petoskey News Review
The Senior Graduating Class of Kalkaska MI made Walloon Lake the destination of several of their class trips as noted in the articles below. 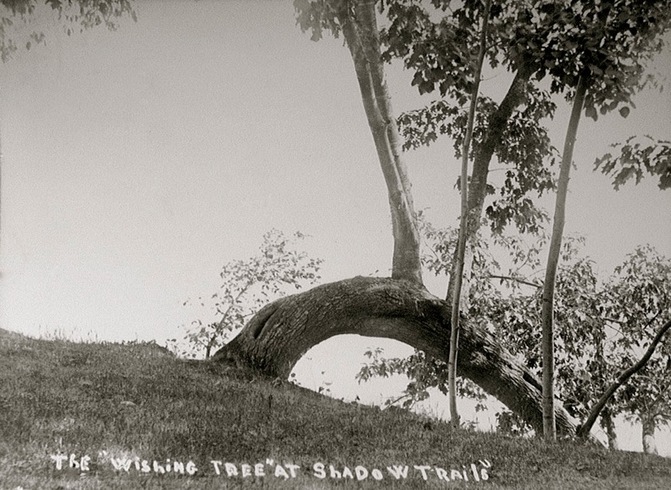 Submitted from the Collection of Ross Renwick
Dr. S.D. Walden (Later, Ed Toner > John Scott Family)
Three Photos Below: Dr. S. D. Walden purchased almost two miles of Walloon Lake shoreline along the west side of the South Arm in the 1890s where this cottage is located. In a 1911 Walloon Lake Association booklet (Pages 26 & 27) S.D. Walden was described as "the largest individual holder of shore property on the lake, is a firm believer in the attractiveness of nature and is carefully maintaining the natural growth of trees along the shore front of his property, while at the same time he is cutting fine avenues through the woods and adding in many ways to the general beauty of his estate." Later in 1924 the estate was purchased by the Edward Toner Family. One of the owners of the Shadow Trails Inn built this house for his own family to have a place to stay other than at the inn.
From an 18 August 1960 Anderson Herald newspaper article written by Jane Toner Scott, she stated that "Mr. McKercher sold us our cottage on Walloon Lake, and we all loved to listen to him talk of his fabulous and active life...he was the son-in-law of dr. Waldon." Jane Toner Scott's family owned the town newspaper in which she wrote her column called "The Interim" where she expressed her thoughts, by writing sentences... and parts of sentences, in lower-case as the poet e.e. cummings had written... and, ending her columns with "that's all for now..."

Mrs. Jane Toner Scott ~
TENDERNESS, love, concern, dedication, loyalty, enthusiasm, can all be used to describe Jane Toner Scott who passed away Sunday morning at the age of 67. She was above all a devoted wife, mother and grandmother. She showered her tender love and enthusiasm on all members of her family and her dedication to them is beyond description. IN ADDITION to her homemaking duties, she always found time to work with and for others. Her ability to radiate her exuberance to others when involved in some worthwhile project or mission of mercy was a trademark. Mrs. Scott, editor of The Anderson Herald and vice president of Anderson Newspapers, Inc., had written a daily column, there for 15 years and had served as an executive of Anderson Newspapers and The Herald since the death of her mother, Harriet Williams Toner, in 1964. APPEALS FOR assistance for those in need were frequent in her column and the response to those campaigns was always fast and heavy. Through her column she launched an organization locally called HOPE (Help Other People). It was created solely for the purpose of raising funds for interest-free loans to meet emergencies of stricken people. Numerous times she used the influence of her column to gather clothing and furniture for persons who had lost their belongings in a home fire or other catastrophe. Among the many civic affairs in which she was active was the founding of the Historic West Eighth Street organization and the Gaslight area along that thoroughfare. MRS. SCOTT was the daughter of the late Edward C. and Harriet Williams' Toner. Her father was owner At Wit's End and publisher of The Herald until his death in 1929 and at that time her mother took over active management of the publication. Mrs. Scott assumed her role as an executive of the firm at the time of her mother's death in 1964. Space will not permit a listing of all her accomplishments and the good deeds she has performed for others. To do so would require volumes. SHE WAS, however, active in the Madison County Chapter of the American Red Cross, American Cancer Society, Heart Fund, Maplewood Cemetery Association, Mayor's Advisory Committee, Bill Wilson Boys' Club, Victoria Guild of St. John's Hospital, CWWU Home, Madison County Women's Republican Club, Altrura Club, Phi Beta Psi sorority, Indianapolis Reading Club, American Newspaper Publishers' Association, Inland Daily Press, Indiana Republican Editorial Association, Current Events Club, 0ver-The-Teacups Club, Kappa Alpha Theta Alumnae Club of Anderson. An excellent hostess, her home always reigned with hospitality, especially after services at the First Presbyterian Church, when she observed the coffee hour. HER ATTRIBUTES were many and her faults, if any, were so minimal as to go unnoticed. Jane Toner Scott died too soon. But her friends' bereavement is softened by the fact that she lived a lifetime every day and all those who had the good fortune to know her were better for that experience. EVERYONE at Anderson Newspapers, Inc., and especially the staff of The Anderson Herald share the deep sorrow of her husband, John, her three children and grandchildren as they write to the career of a loved one. Jane Toner Scott -1909-1976

The photo below during Winter and the six photos above during summer, show the Walden/Toner/Scott house in 2013,
before the property was bulldozed to make way for a new property.
The previous Scott property, in 2014 is owned by a Norcross Family. 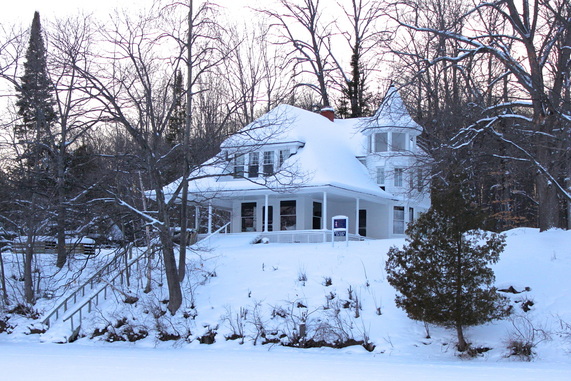 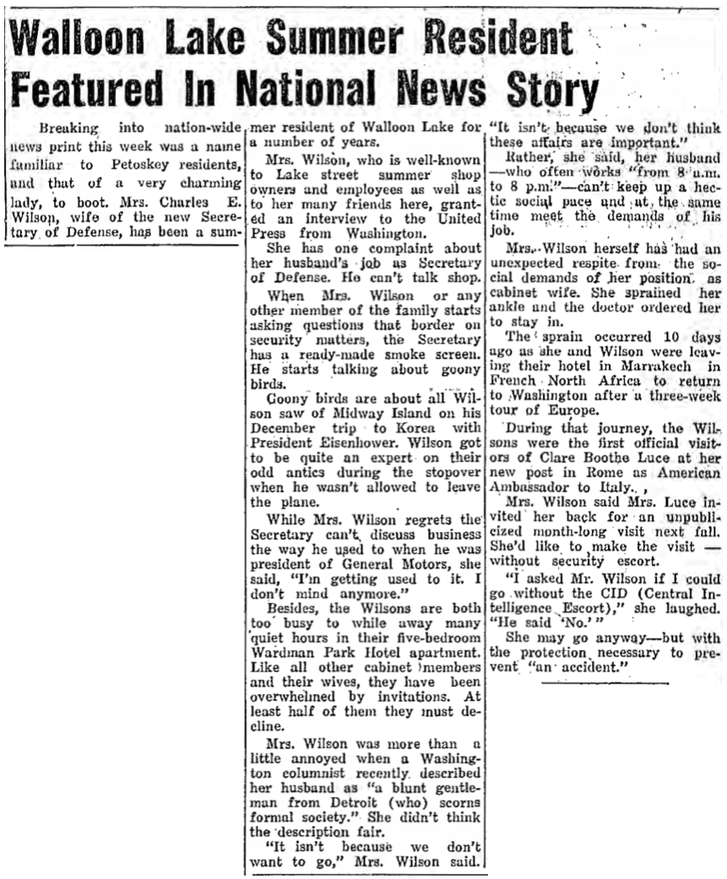 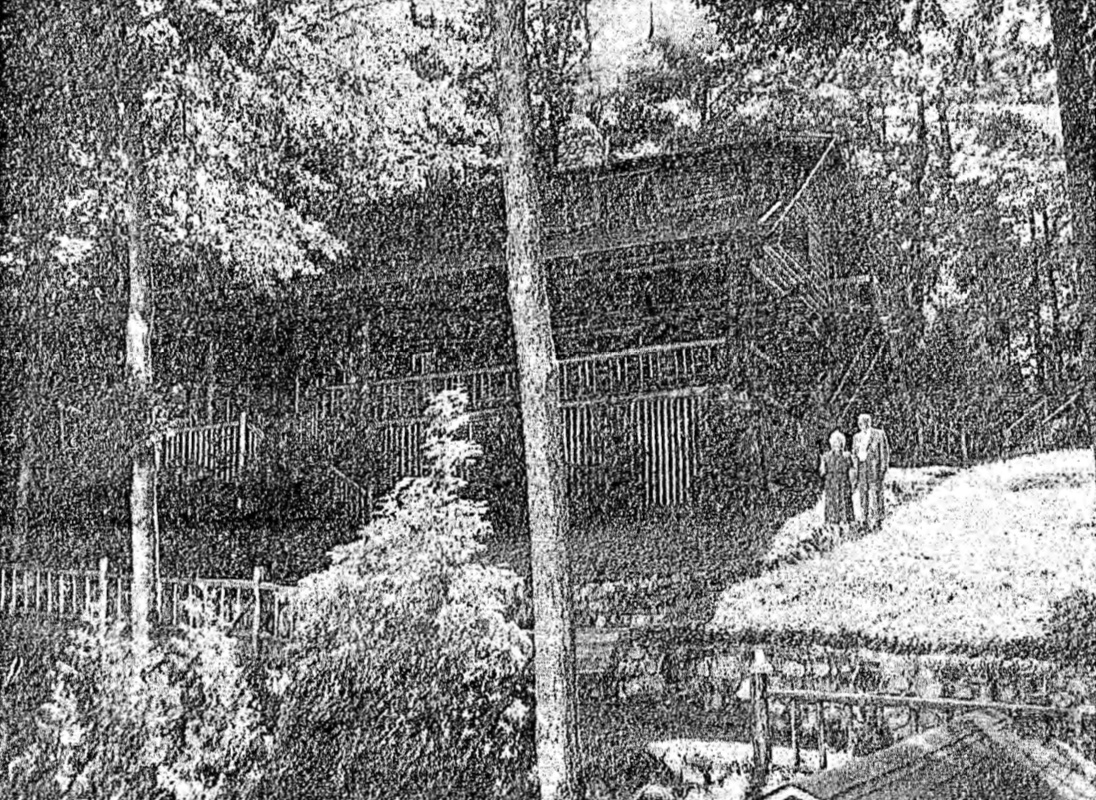 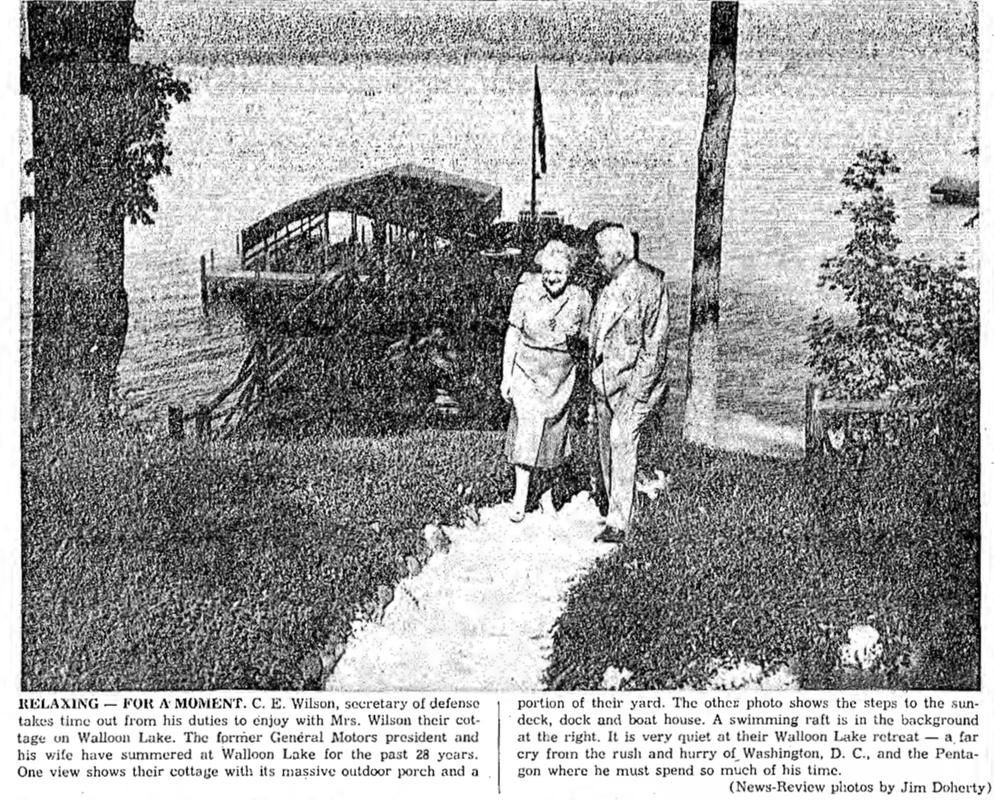 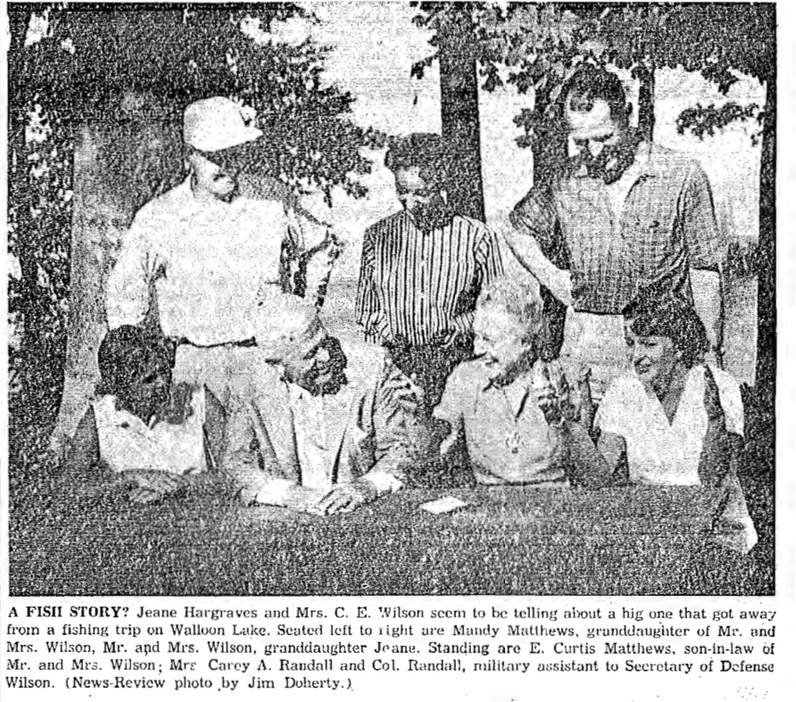 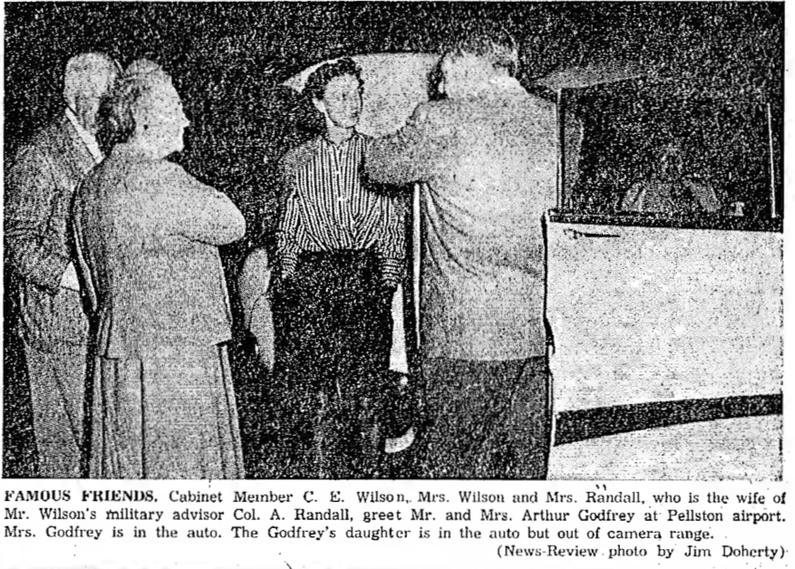 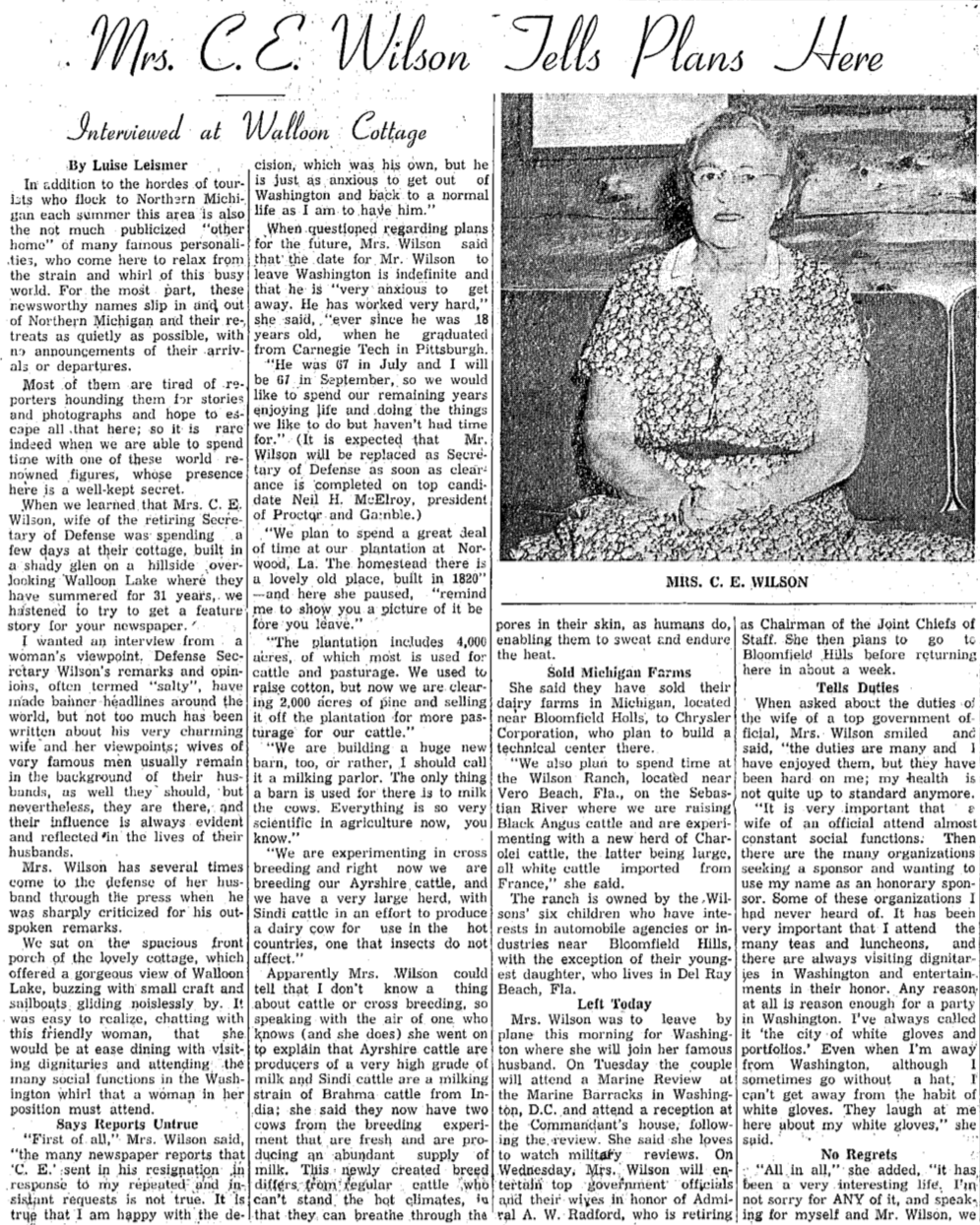 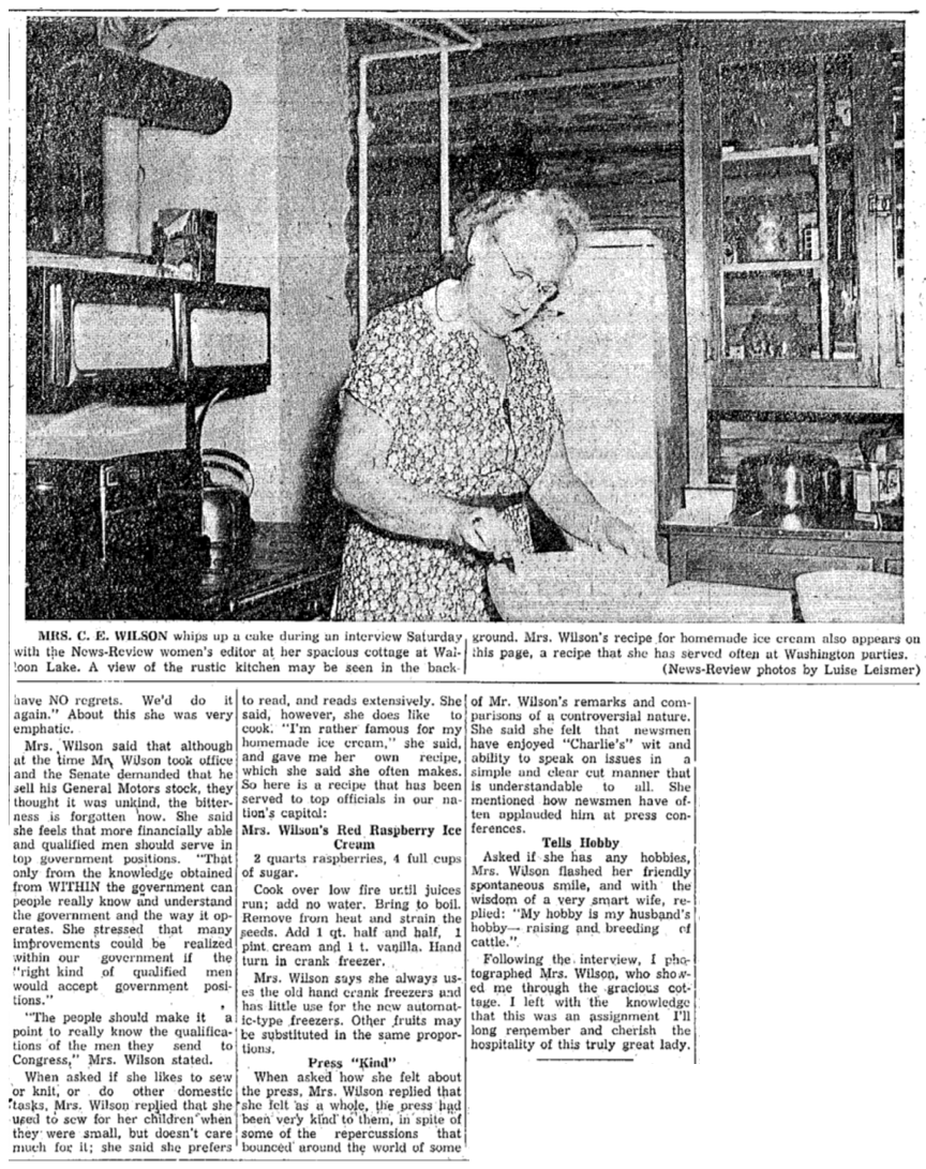 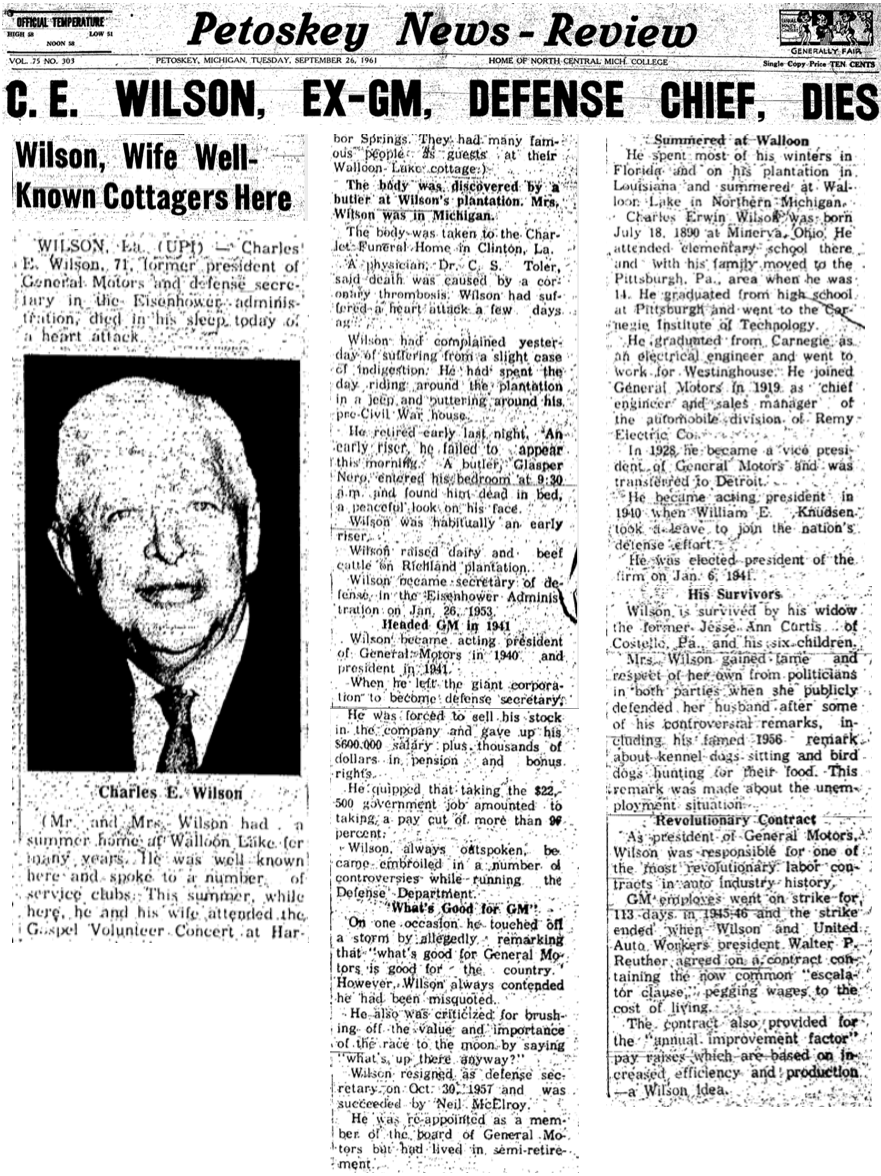