The design and compilation of the text and photos on this site are copyrighted 2014.
Electricity
Near where the public boat launch is located at The Foot, Bill Grund had the Electric Delco Plant beside the New Walloon Hotel in the early 1900s. Bill was able to produce electricity there by using a wood-fired boiler from his sawmill.

Not until about 1925 did Consumer's Power bring electricity to most everyone on Walloon Lake.
"For a few years all we had for lights were the old kerosene lamps and some were quite fancy. We had four in our living room and one in the kitchen, and when we wanted to go down to the boathouse or outside anywhere after dark we had to use lanterns, as flashlights were not regularly obtainable. Bell Grund owned a sawmill back in the swamp behind where the post office now stands. It was steam operated by a big boiler and the saw set on a concrete foundation. When Bill’s supply of logs ran out he decided he could make better use of his boiler to make electricity, so he bought an old dynamo and made a concrete foundation for it to set on, only the whole outfit was built on a soft layer of decayed sawdust in that already soft area. But that didn’t stop him from starting what became our first light plant. The dynamo was run by a big steam engine and a large flywheel which practically bounced up and down on its insubstantial foundation. Bill sold the Melrose Township Board on having a few street lights put in and then sold some of the resorters on having their cottages wired for the electricity. He often showed up at our front door trying to sell Mother on the same thing, but she didn’t trust him and always turned him down... she had foresight in her decision. As Bill needed saw logs to feed his boiler he had decided not to run his generator during the day but only in the evening. Consequently those who did have electricity only had lights from about five or six o-clock in the evening until ten thirty or eleven at night, so we’d have to keep our kerosene lamps for times at night when they would be necessary. A number of times Bill called on Mother trying to argue her into having our house wired, but she wouldn't have it.

Finally Bill [Grund] decided our town should have a movie theater and he could run it with his electricity. He built a ramshackle building on the shore across the road from Bill Gratsch’s brick cottages. He showed three reels of film, the old-time one-reel comedies, news reels and such and charged ten cents admission. I never was inside the place as my folks were afraid of the chance of the place catching fire as it was a fire trap...

...Bill finally sold out [the electric plant] to a man by the name of Schultz. He was a likable chap and soon found that the old swamp plant had little potential for growth, so he bought a small mill pond in Boyne Falls and moved his dynamo down there where he generated electricity with water-power. Normally he had plenty of water although some days his water level would drop and he’d have to curtail his generating. He endeavored to give us lights twenty four hours a day, but occasionally his generator belt would break or something else would happen and the lights would suddenly quit. Then we’d remark, ‘Spit in the dam, Schultz, Spit in the dam’. When Mother was approached by Schultz as the new owner of the light plant she succumbed and had our cottage wired for electricity. That was much better since the current was on for twenty four hours, of course there was some breakdown. Our electric service was quite satisfactory for the area we were located in, and everything went along that way until Schultz sold out to the Michigan Public Service Company. This was a little larger concern and had more funds behind it than Schultz had, so much of the power lines were improved and we got more service for our money. I should also mention two friends who worked for the Michigan Public Service. They were Leon Pratt and Bill Howie, both from Boyne City. They were linemen and they were the ones the company called on when our lights would go out when a line broke during a storm. No matter what the weather was like they were always on hand to repair the break and get our power back on as soon as possible, rain or shine and it was usually rain and probably snow. They were a faithful pair and I always hated to have to call in when our lights did fail as I knew what sort of dangerous conditions they had to work in.
"
~ James C. Whitfield, Sr.
"George Depew lived in the house at the top of what is now called Depew Road. He built several of the cottages along the lake. In 1938 we finally got electricity out our way so George Depew added a bathroom on to Nod-aWay. An indoor bathroom, electric stove, and lights…. what luxury!! The old out-house still stayed and was functional as a spare for emergencies and to store a few years tools." ~ Barbara (Ice) Smith (Lake Grove Road, West Arm) 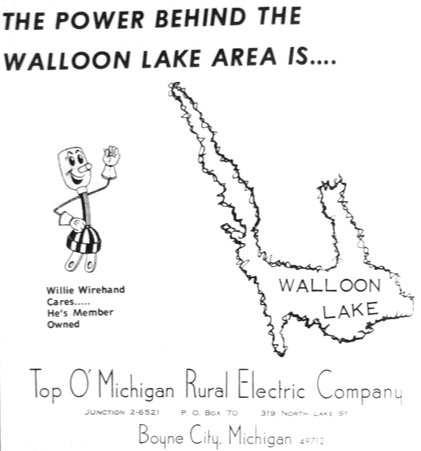 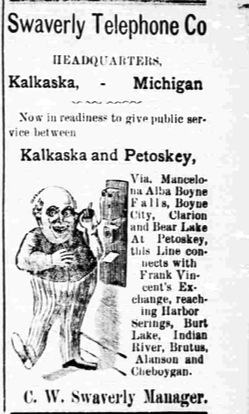 2 September 1897 ~ Kalkaska Leader newspaper
In 1897, Walloon Lake was still known as Bear Lake as mentioned in the Swaverly Telephone Co. advertisement above. 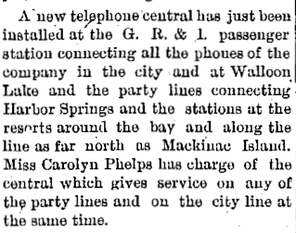 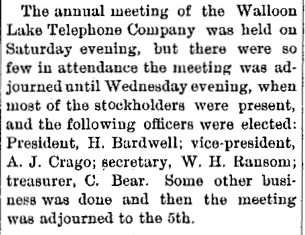 This photo below of the proposed 1940 NEW Telephone Building for Petoskey shows the same building that houses the Petoskey District Library in 2017. This building in the photo has been added on to, and renovated, of course, but the entry door still appears to be the same. 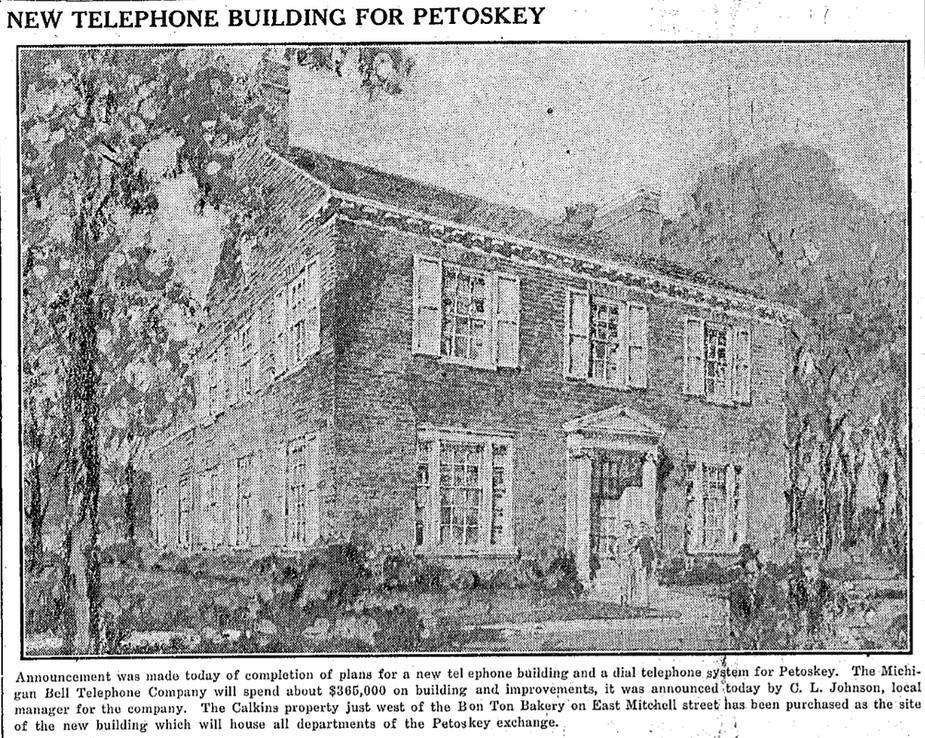 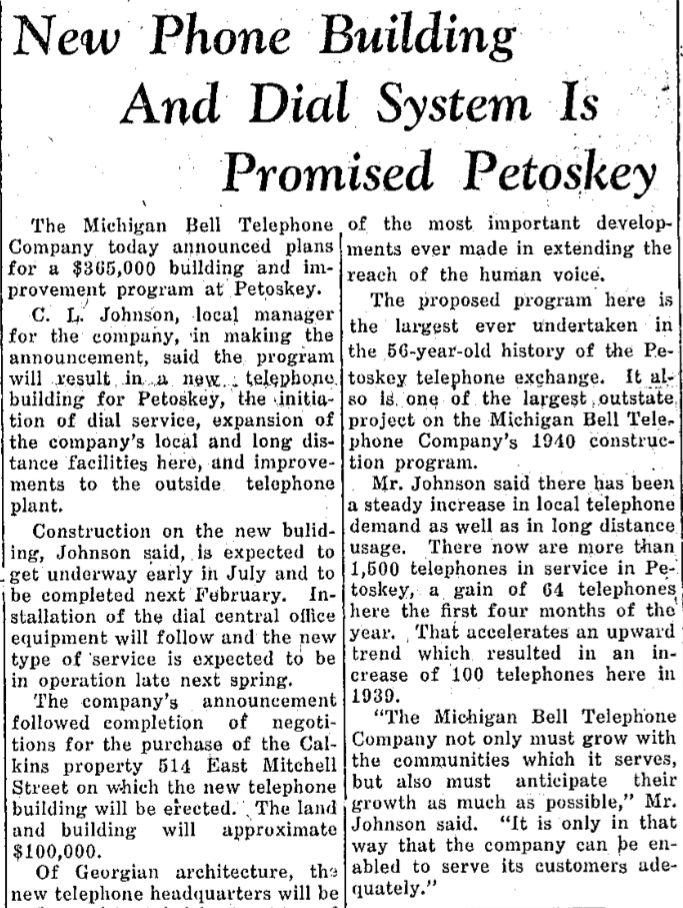 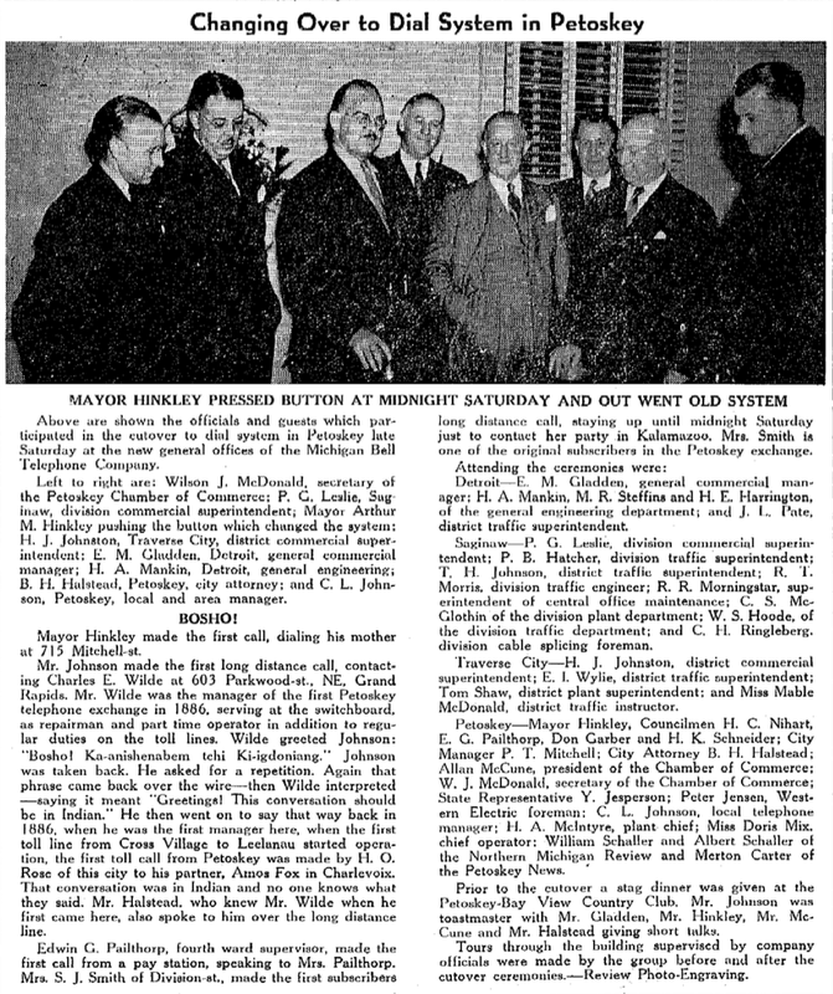 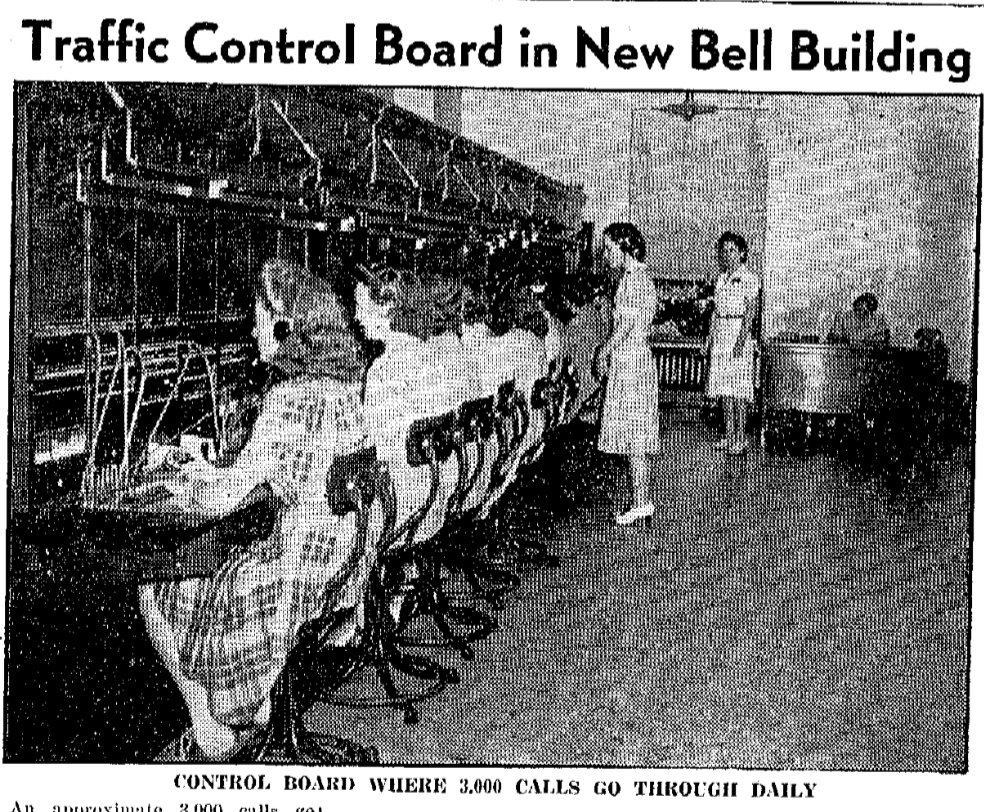 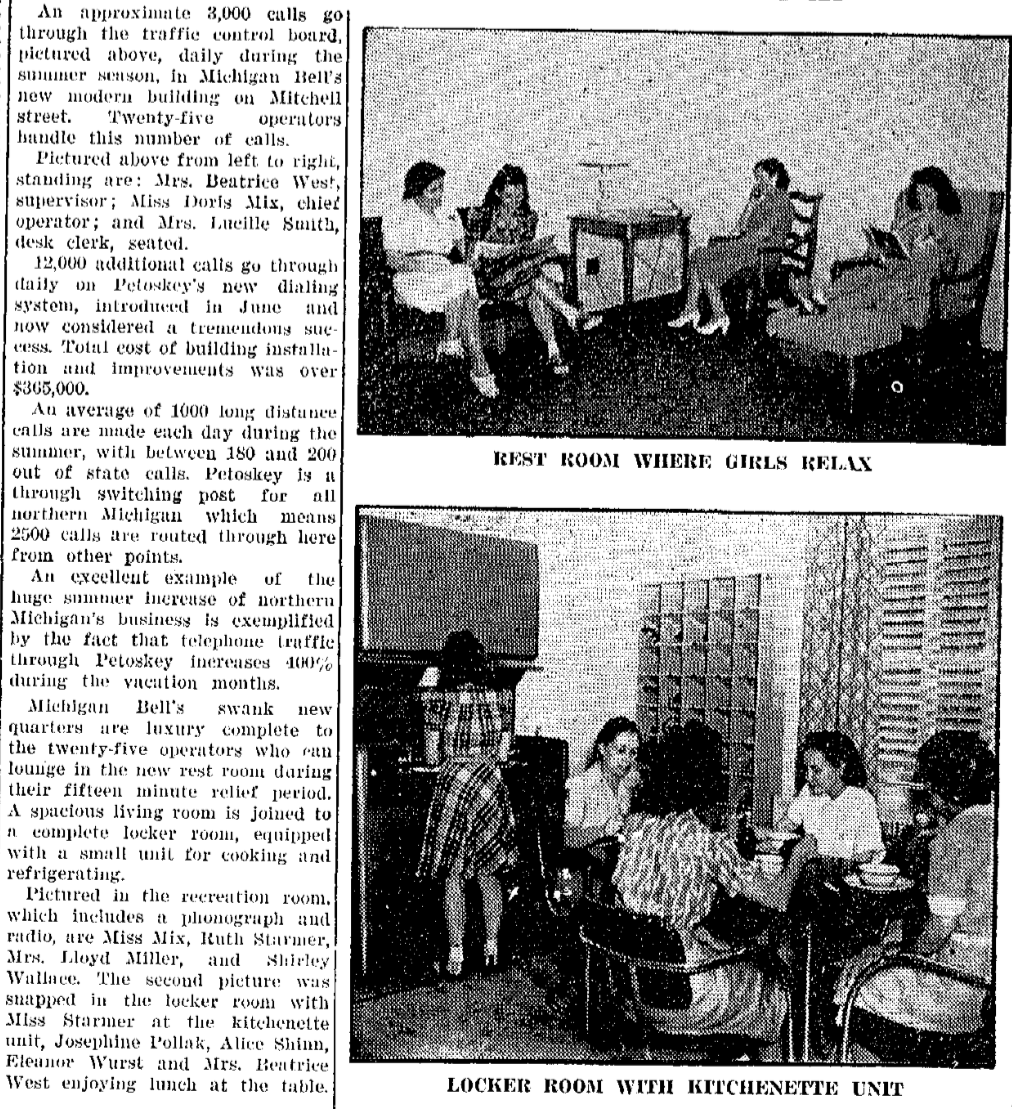 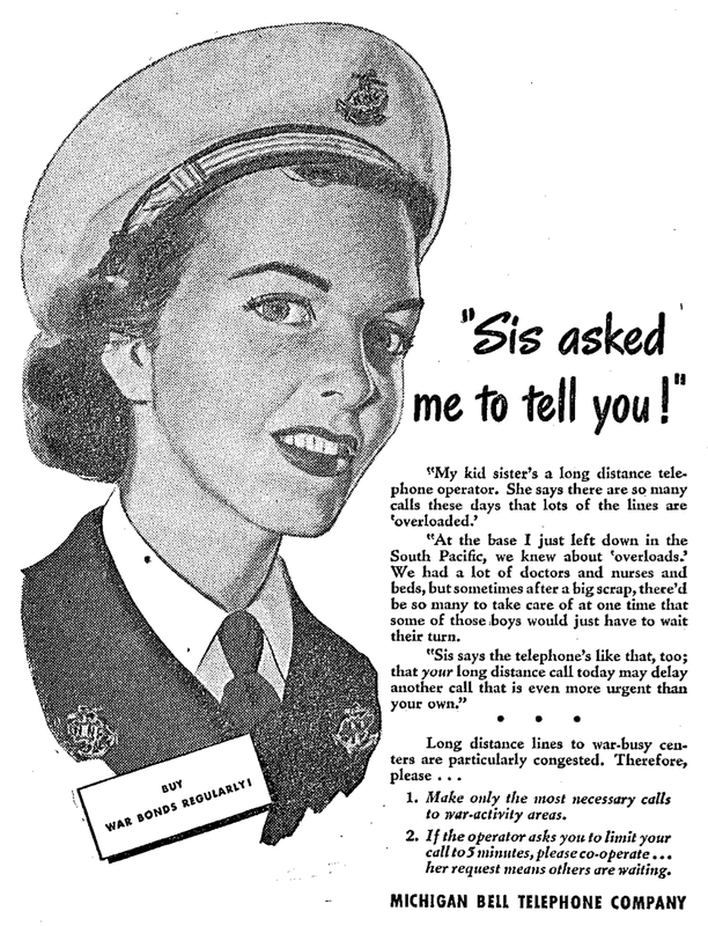 The Michigan Bell Telephone Company advertisement below tells how they promoted having "Party-Lines!" 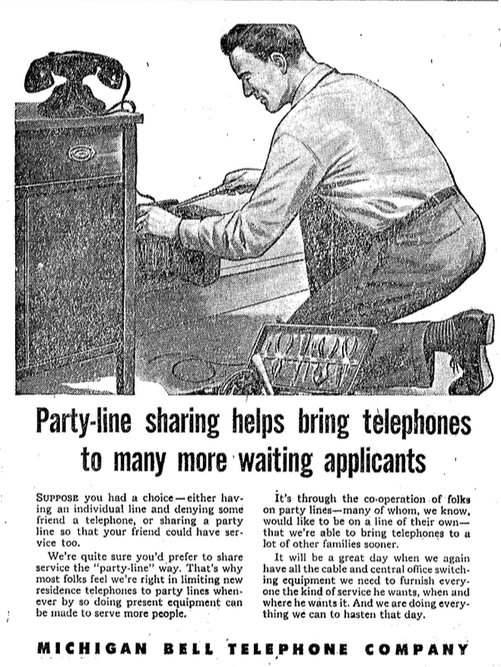 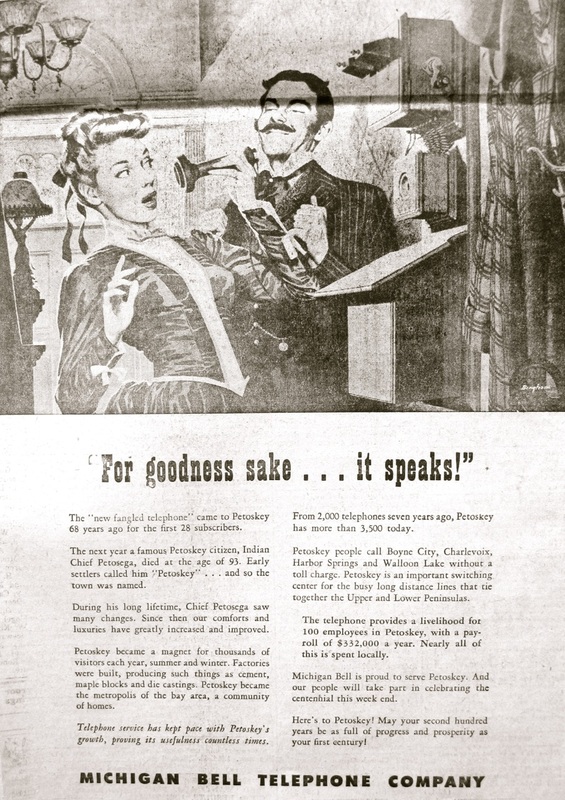 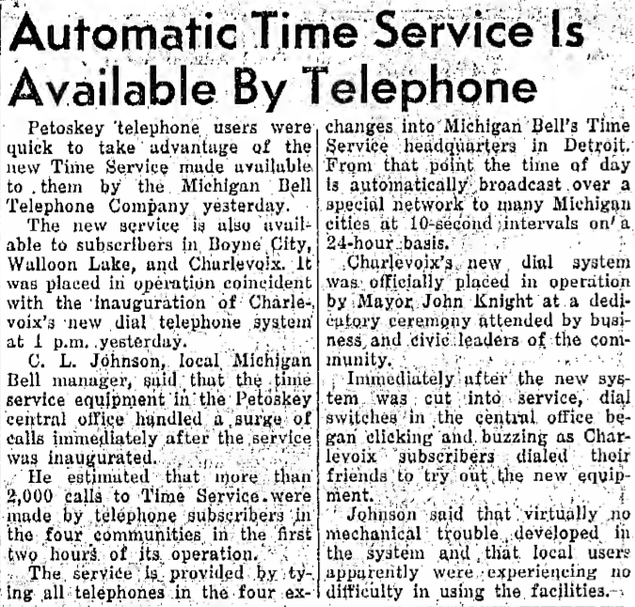 The five photos directly below were submitted from the Collection of Louisa Taylor who is in four of the photos. The scrunched article on the left told that Louisa's mother Mrs. Ralph (Pat Buckley) Taylor was the agency chief operator for Michigan Bell Telephone Company. Louisa stood in front of the sign and the little office building which was right across the street from Louisa's mother Pat's parents, so Louisa's Grandparents' Dan and Jessie Buckley home. The little telephone building filled with terminals for Walloon Lake, was located right beside the Lester and Effie Stevens home as seen in the background in the photos two rows below, both left and right. The Stevens Home, with the front porch, is located still, in 2014, on this sharp corner of roadway heading into The Foot of Walloon Lake Village. In the same photo two rows down on the left, can be seen, at the left, but partially hidden behind the tree, the little brick telephone building. In the background on the right behind Louisa, is the Masters House which still stands in 2014, but is no longer in the Masters Family name. This Masters house was home to the FIRST telephone in Walloon Lake.

In 2017, Effie Stevens told that her home as mentioned above had been the actual telephone office before she and Lester bought it for their home. So, perhaps the sign in the photos below were actually pointing at the house at that time, and not at the little red brick telephone building beside the Stevens' home. 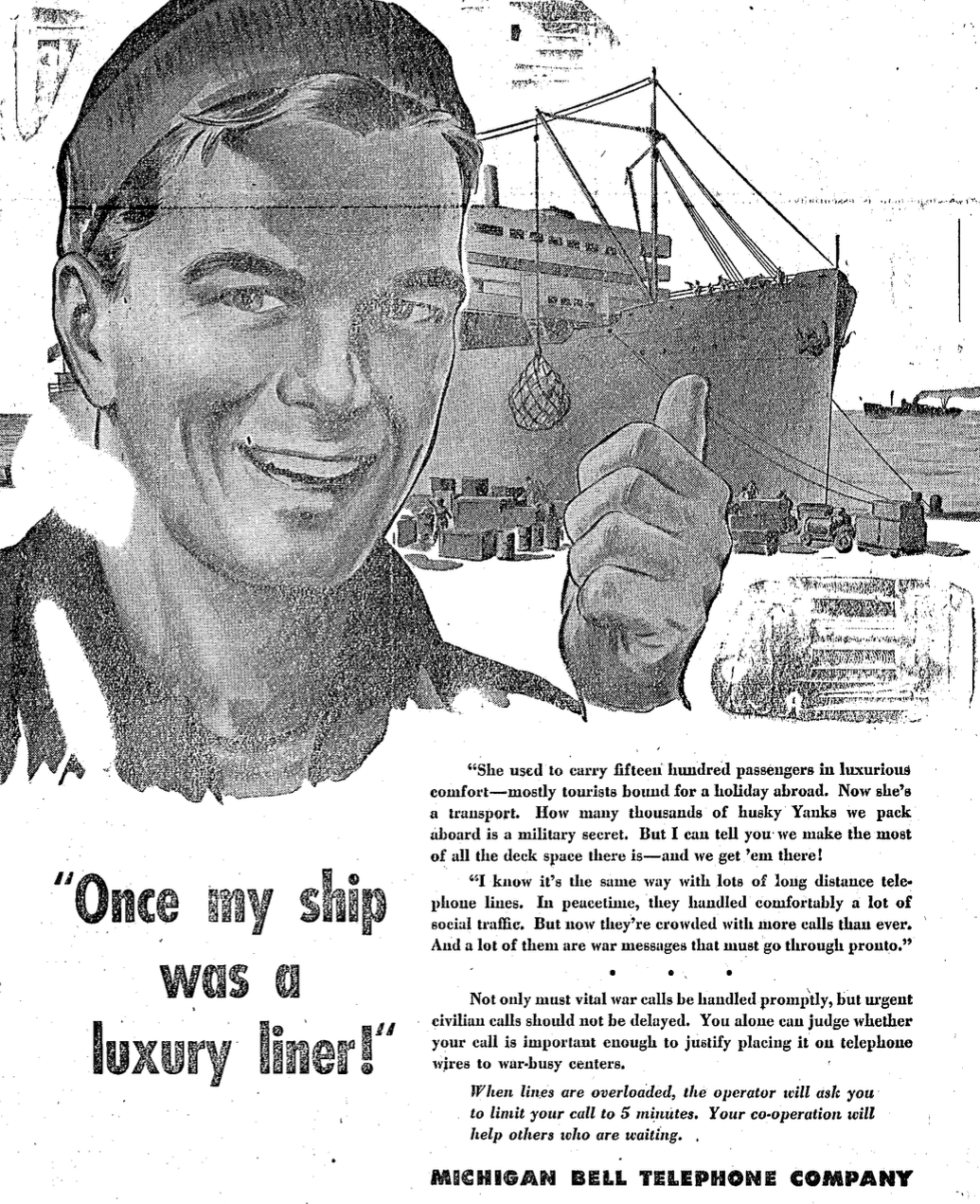 17 September 1943 ~ Petoskey Evening News
Stevens Brothers Retire from Michigan Bell Telephone Company in 1976
In a 14 September 1976 Petoskey News Review article, it announced that Les Stevens' brother Arthur Stevens was following the retirement steps of his brother Les in June of 1976 (See Les' article below). Arthur retired from Michigan Bell Telephone Company after 36 years of service. Art began working for Michigan Bell in 1940. After a "leave of absense" and following his return from service in the Air Force, Art worked in Cadillac until July of 1947 when he returned to Petoskey to work the remaining 29 years.

Photos Below: The little telephone building beside the Lesterd Stevens (his photo in above news article) Home is still standing,
and appears to have another little building behind it.
In the photos above the little brick building sign recognizes the telephone company as Michigan Bell
and in the 2014 photos below the company sign reads Ameritech.
Please do not copy the photos on this site, many of which have been submitted by private individuals...
just come back and visit the site often to view the photos.