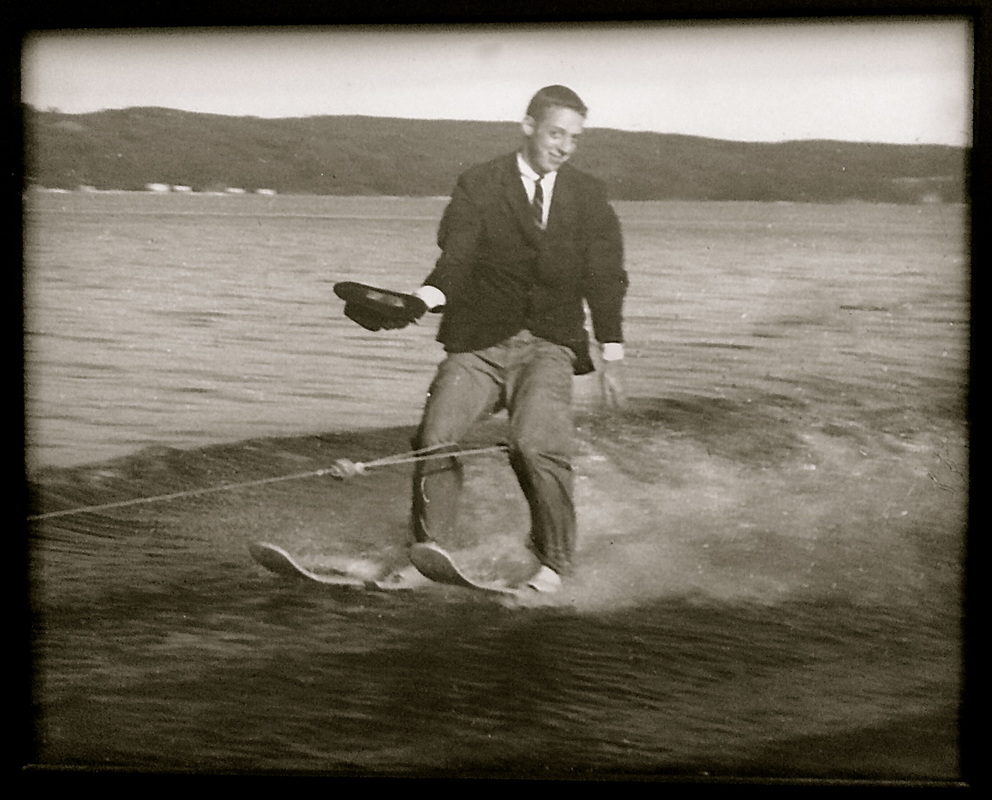 Submitted by Charley Zimmer
Charley, again in the water, was in another Graphic Resorter photo below labeled as "doing research with the Graphic's society editor, Sally Colwell." 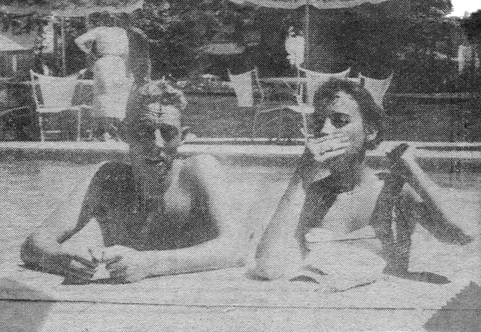 1959 ~ "Charley Zimmer on the left, doing research with the Graphic's society editor, Sally Colwell.
~ Diving Adventures in Walloon Lake in about 1960 ~
Dick Ecker relates another diving adventure which took place about a year after Dick had dived with Barb Burns' cousin in the photo above:
"Barb Burns must remember when we were down 70 feet in Walloon when her regulator quit. She could get no air. I did not notice what was happening till I saw Barb buddy breathing with Mr Barr's mouthpiece. We got to the surface and Barb dropped her weight belt. Then her wet suit kept her afloat like an empty bottle. When we got to a dock they put the pressure gauge on her tank and it had 1150 PSI on it, but her regulator would pass no air. Was she ever mad as she just had received the regulator back from being rebuilt. It was a 2-stage Voit regulator. She was unhappy about losing her weight belt.
I went back out into the lake about 50 yards, turned and went straight down to Voila' her weight belt. A lucky find at about 25 feet. She was happy to get it back.
I did not learn how to buddy breath until later, but it should have been learned earlier. That dive could have been fatal."
~ Dick Ecker
The booklet "Little Traverse Bay Resorts" in the Public Domain describes Walloon Lake and its waters, on the page below. 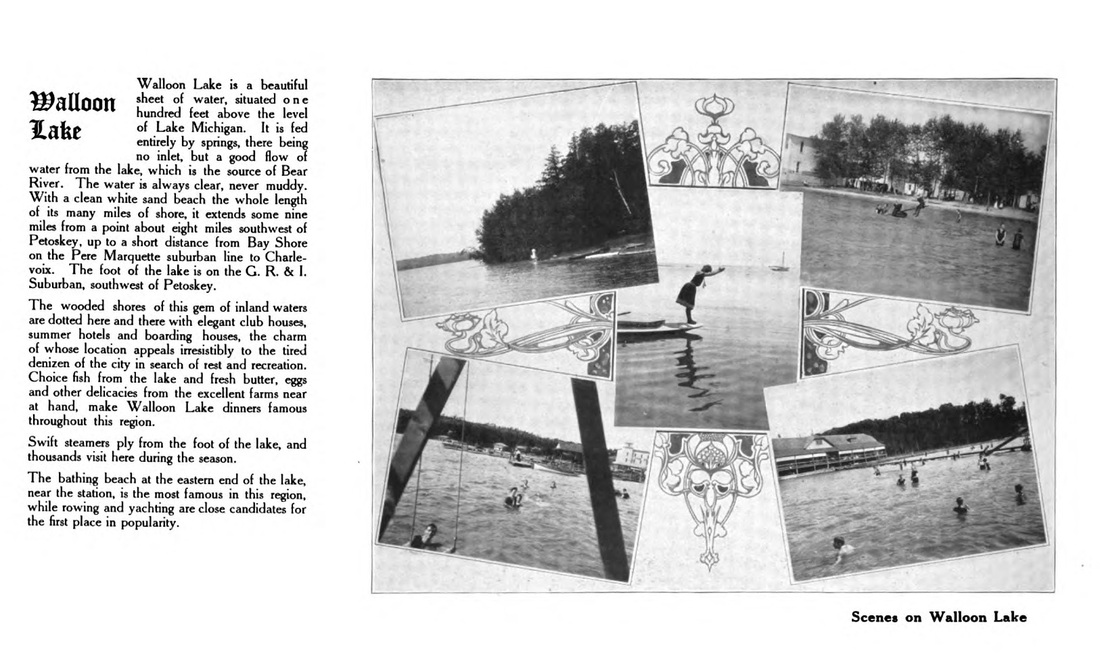 ~ HAPPY NOTES of Loving Being By The Water ~
Kenny Starr remembered that he and his dad Alva Frank Starr built a diving board to put out in Walloon Lake at the beach area. They pulled it up to shore with a rope, and once when the rope let go, it wrapped around Kenny's waist and gave him rope burns. He said he was lucky that it had not wrapped around his neck! Kenny loved being by the water enough, however, that he spent a great deal of his life living, and working, near the Walloon Lake Public Beach, enlisting in the coast guard, enlisting for military duty which took him to Hawaii and being on Pearl Harbor the day it was bombed, and working on the Sloop Welcome at Mackinac City for years... yes, he loved being by the water. 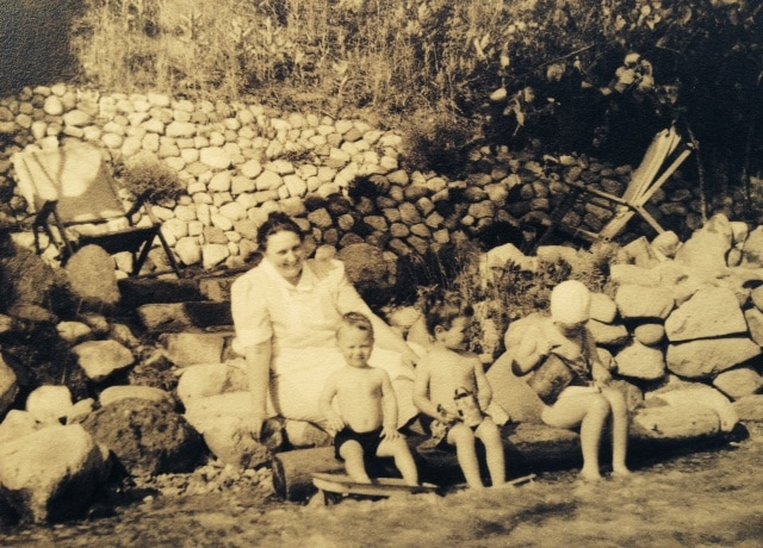 Photo Below: My dad was a fisherman, so he preferred to own a fishing boat. He did have a powerful motor on it to take us on the ski board. I always wanted a canoe, and Dick liked sailboats. However, we were happy to have any kind of a boat. It was great just getting out on the water. ~ Barbara (Ice) Smith (Lake Grove Road, West Arm) 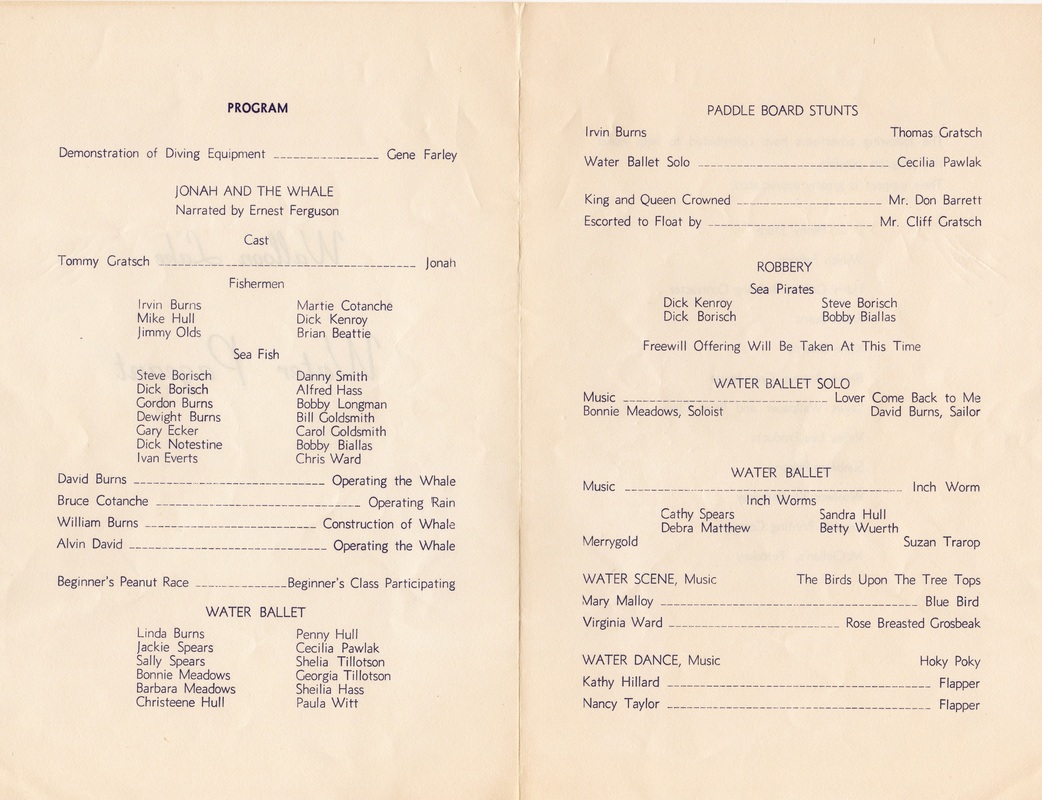 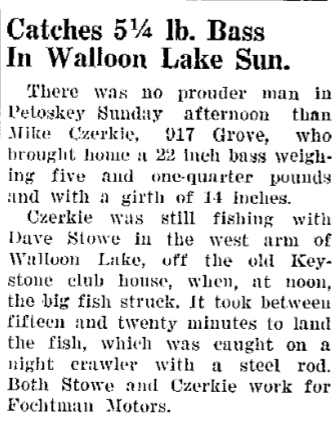 7 August 1941 ~ Northern Michigan Review
While demonstrating their love of "Being by the Water,"
Pete Henley and George Biallas of Walloon Lake hold huge fish they caught in Black Lake. 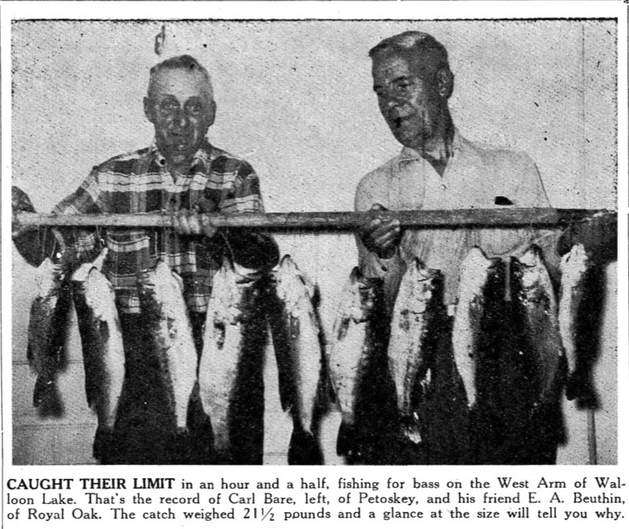 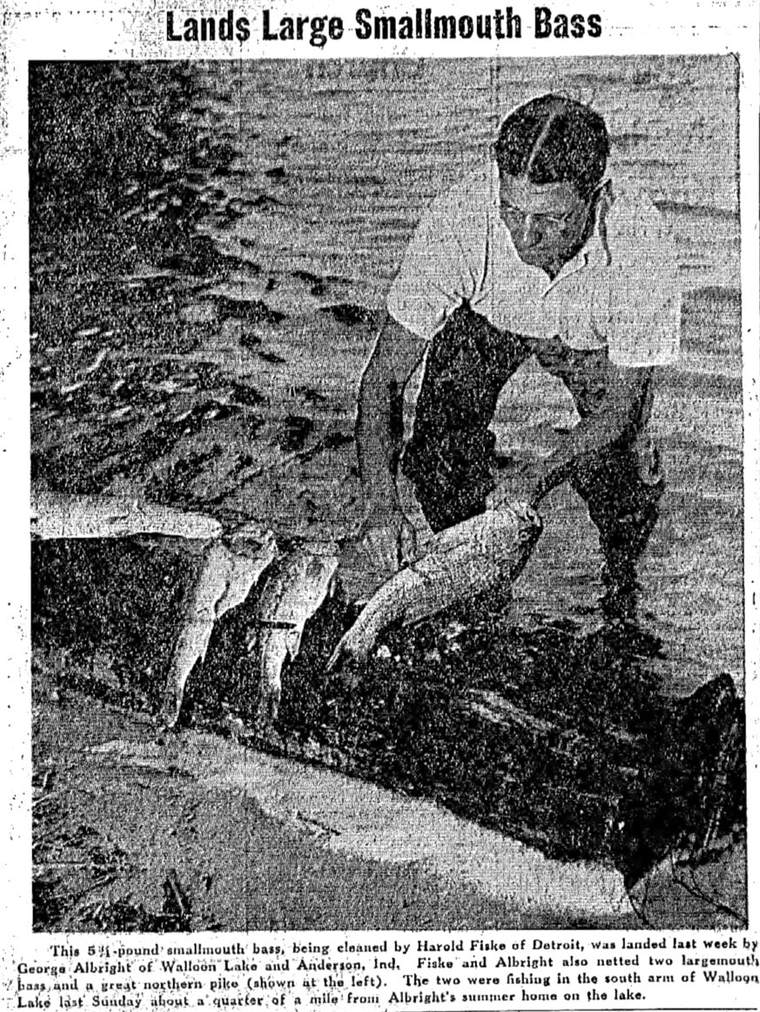 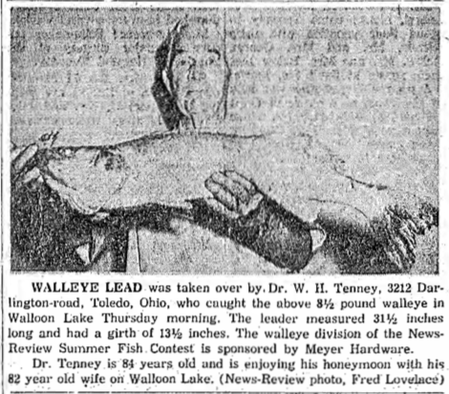 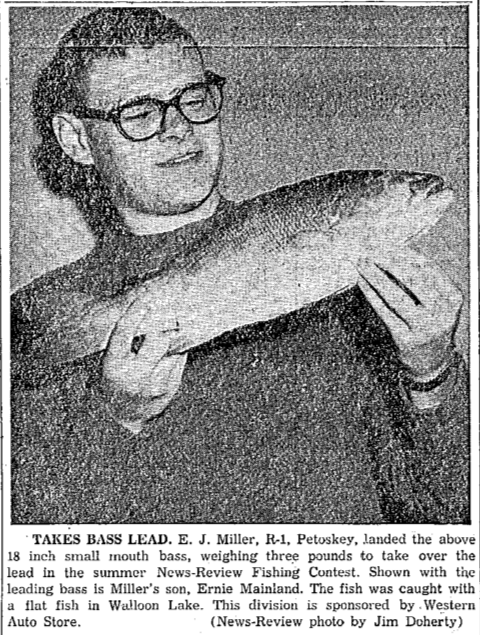 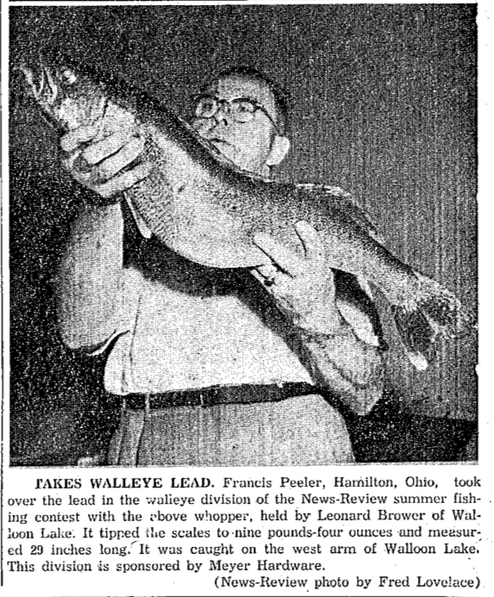 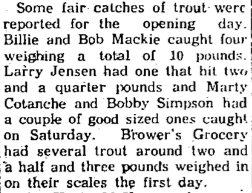 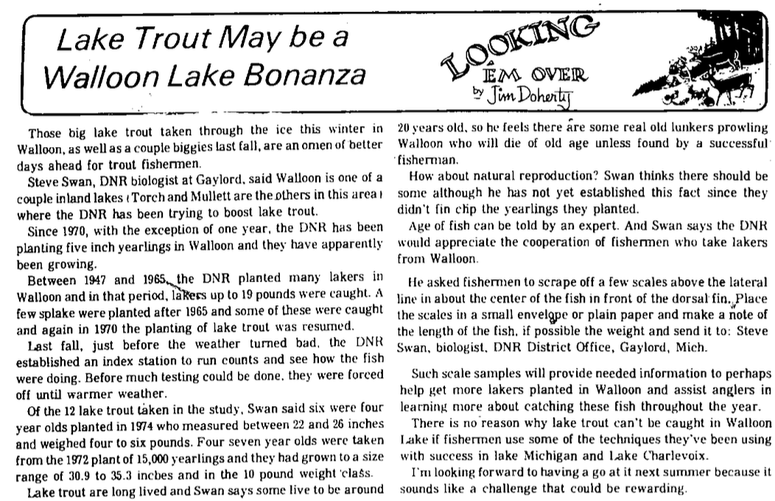 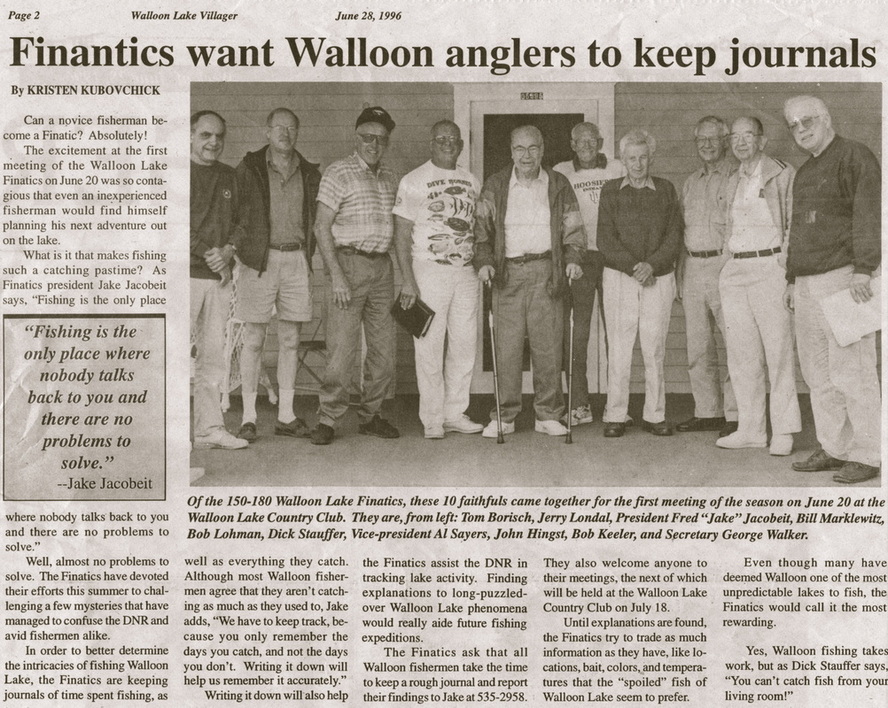 28 June 1996 ~ Walloon Lake Villager
"The Fisherman" February 1952 issue had an interesting article and several photos of "Michigan's Walloon Lake" by Everett A. Houghton. On page 31 the article stated:

"The Michigan Institute for Fisheries Research of Ann Arbor lists eleven species of fish known to exist in Walloon: bluegill, pumpkinseed sunfish, rock bass, smallmouth bass, largemouth bass, northern pike, yellow perch, walleye, lake herring, lake trout, and smelt. Old timers have also reported catching a few crappies each year --- not many, but of good size.
Being an old Ann Arbor man myself, I hate to do this to the Institute, but I am afraid that I ust report one more species to be found in Walloon --- catfish. That's right --- just one little old half-pound catfish. For that was exactly what Joe had caught my first evening out, the sum total of his and Bil's two days of fishing at Walloon."

(See more articles like below, about Attorney Barnum's Disappearance on this website on the South Arm webpage.)
Article Below: John Hernley did not drown, but he was killed on his way to spend the day fishing on Bear (Later Walloon) Lake. 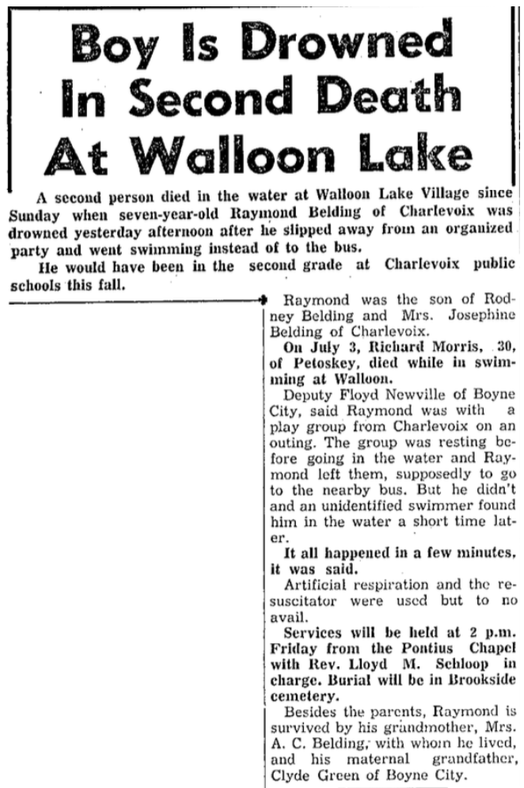 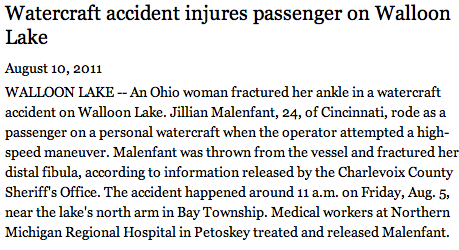 Let me know if you recognize any of the visitors' names in the articles below please. 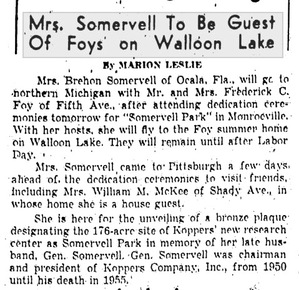 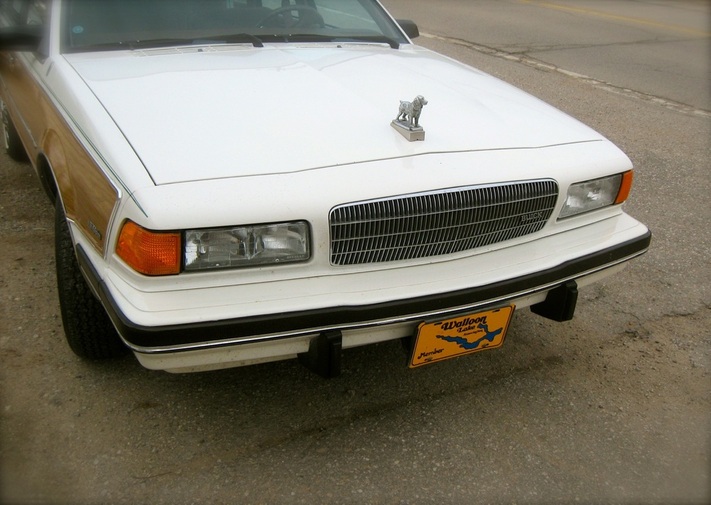