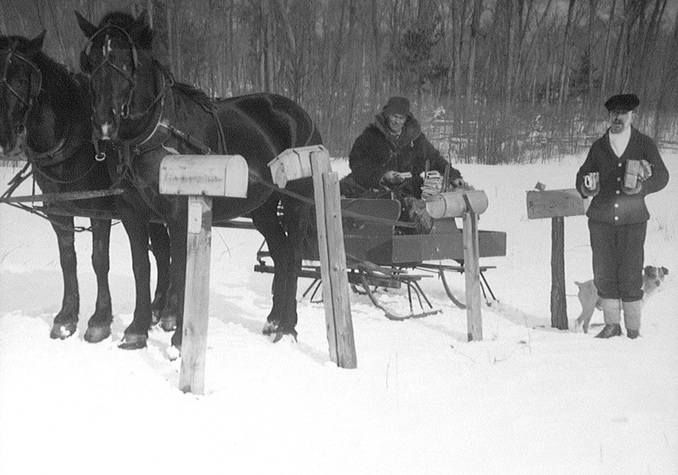 Submitted from the Collection of Ross Renwick
Picturesque Walloon published 1911 described on page 14, WALLOON LAKE'S EARLY HISTORY AS TOLD BY AN EARLY SETTLER:
"More than thirty years ago we arrived at what was then the station of Melrose, at that time the first station south of Petoskey. It consisted of two buildings, the section foreman's residence and the toolhouse and postoffice combined. The postoffice consisted of a slot in the door of the toolhouse, with a box attached to the inside, to catch whatever mail might be left there by the trainmen. The patrons of the office consisted of the section men and possibly five or six homesteaders who, at some time or other, had worked on the section. Every one was his own postmaster. [About 1881 called Melrose Stop]

1899 ~ the post office was named Talcott. At this time the mail was sorted in Clarion,
and brought to Talcott where the first postmaster was Frank W. Jones.


1900 ~ the post office was named Walloon Lake at the suggestion of J.R. Hass, a local butcher.

24 January 1910 ~ Petoskey Evening News
"William Ransom owned the principal store in the village on the land on the east side of the road that ran through town. Fred Shepherd owned the building that housed the other store on the west side. Ransom and Shepherd more or less alternated being postmaster. One year the post office would be in Fred’s store and possibly the next season it would be in Ransoms. He owned two stores the other being in Clarion and that proved very handy. The mail came in to Clarion, was sorted and any destined for Walloon was put in a bag which old Mrs. Himes brought over to Walloon in her buggy. When Ransom ran out of some commodity at Walloon he took to calling up the Clarion store and telling the clerk over there to put such and such in the mail bag which was to come over to the lake. Of course no postage was paid on the desperately wanted item. All went well with this scheme until one day a postal inspector happened to look into one of the pouches and found---one item without postage of any kind. That was the end of William Ransom as postmaster. Then Mrs. Ransom stepped in, put in her application---and we had a postmistress. I guess her husband’s fiasco with the post office department made her more cautious as I never heard of the Mrs. getting in trouble."
~ James C. Whitfield, Sr.

1909 ~ the Walloon Lake Post Office was housed in the Club House which was adjacent to the New Walloon Hotel. 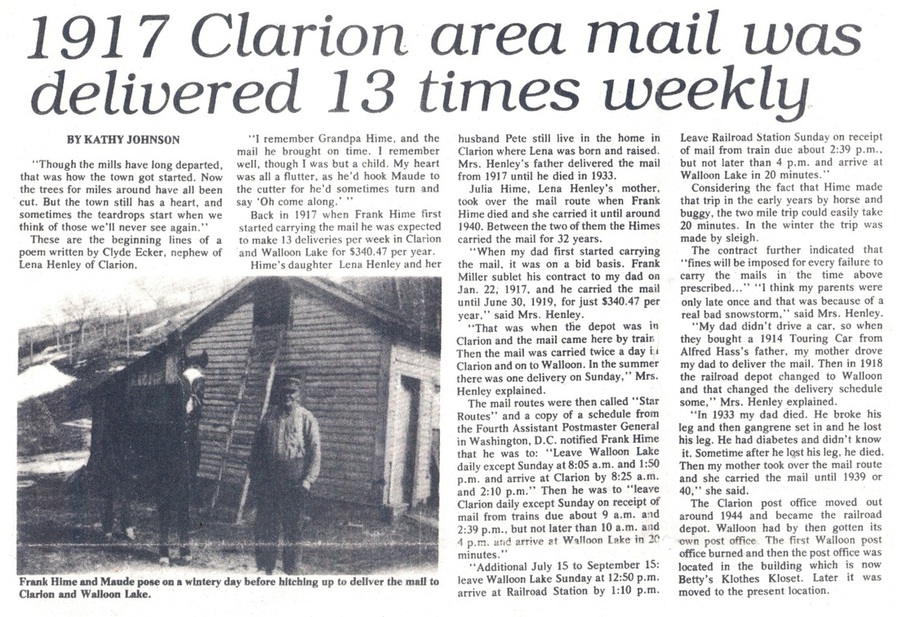 Submitted from the Collection of Mary Erb ~ Date and paper unknown
In the beginnings of postal delivery, parcels were not mailed. It was not until 1913 that this happened. The Smithsonian Library website describes the effects of parcel post delivery as follows: "The establishment of parcel post in 1913 had a tremendously stimulating effect on the national economy; it opened a world of opportunities for both farmers and merchants alike. Rural Americans were able to purchase foodstuffs, medicines, dry goods and other commodities not readily available to them previously. Even more conveniently, the goods were mailed directly to their homes. In addition, farmers were able to ship eggs and other produce directly to the consumer, saving both time and money." The Smithsonian Library website has many associated photos regarding parcel post delivery in the United States.


Only a short time after parcel post began, more clerks were necessary to sort  the additional mail arriving on the late G.R. & I (Grand Rapids and Indiana) and evening trains in Petoskey MI, and to prepare the mail for delivery and the carriers the next morning as noted in the article below left. By June of 1913 The Petoskey Record announced in that article below that the C.O.D. feature of the parcel post system would take effect July 1.
The Effect of WWI on the Post Office Stamp

17 March 1917 ~ The Petoskey Evening News
"Frank Jones is believed to be the first postmaster of Walloon Lake after it was moved in from Clarion."

Al Sherk came to Melrose Township in 1886. He served as postmaster at the Village of Walloon Lake between 1927 and 1948.

By 1924, the Postmaster General had issued the first definite, concise and complete program that had ever been put out by the department for the mailing, transmission and delivery of newspapers, whether published daily or weekly. This order gave the same expedition to newspapers as was accorded first class mail as written in the article below. 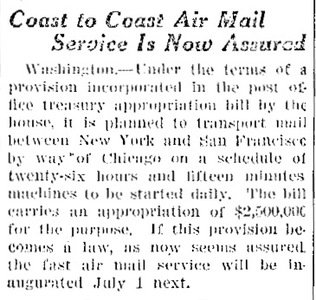 3 April 1924 ~ The Levering Local newspaper
It was back in January of 1930 that James C. Whitfield, Sr., related a winter visit with two friends, Don Demling and Hod Usner, to the Whitfield's Walloon Lake cottage, before they had decided to make it a year around home:

"I think it was Friday that we heard over town that the air mail was being flown in by a small plane which landed on skis, so that was something us aviation fans would have to see. The plane would be coming in to the Harbor Springs-Petoskey airport which was a little more than a smoothed off field, no hangers, no office, just a barn on the property next. The plane was supposed to come in about eleven o'clock and we were there early in plenty of time to see it land. We waited and waited, but no plane. It wouldn't do much good to sit in the car as cars in 'them' days didn't usually have heaters, there weren't any in mine. We went up to the barn where we saw a farmer-type fussing around and asked him when the plane was coming in, but he didn't know.  Sometimes it didn't come in at all. Then I asked him what make it was, but that he didn't know either, so then I asked him, "Is it a monoplane of a biplane?" But that he didn't know either. so I said, 'Does it have one wing or two wings?' He hesitated for several minutes then said, 'Oh, it's a biplane ---it has two wings, one on each side'. That settled us for the day, it was the best JOKE we'd heard in months and I'll never forget it."

The Walloon Lake Post Office has had many different buildings, and a multitude of locations, in the Village of Walloon over the years. 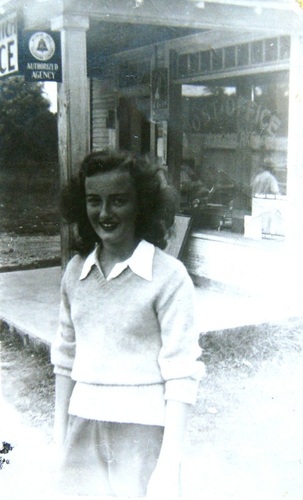 Maxine Stevens (Whitfield) stood in front of the Walloon Lake Post Office when it was located at "The Foot" in the little pointy roofed building. ~ Photo submitted from the Photo Album of Maxine's brother Arthur Stevens
~ Pointy Topped Post Office Building ~
The pointy topped post office building was used as store for different businesses. The Cincinnati Enquirer of Cincinnati OH dated Sunday, 26 July 1959 on Page 40 reported the following regarding a business being housed in the old pointy topped post office building.

"Vacation Taken Up By 'Inch & Foot'
SPENDING the summer in Michigan no longer means setting up a beach chair and hibernating for Mrs. John S. Minor of Cincinnati and Mrs. Howard L. Sloneker Jr. of Hamilton. These enterprising women, who cart their families off to summer cottages at Walloon Lake every year, have opened a specialty shop in Walloon Village. They are now knee deep in the problems of store proprietors. Their shop, the result of a year's work in planning, organizing and redecorating is called "Inch & Foot." "Walloon Village," said Mrs. Minor, "is located in the area called the 'Foot of Walloon Lake'. Because of the size of the shop, the rest of the name was a natural," she added. The minute sized building was originally a post office and then a lunch room. The idea for the shop grew out of the fact that summer residents in that area had to go far to get items for themselves and their cottages. As a result the shop has turned out to be a pleasant combination of clothing accessories, antiques, knick-knacks, toys and household items. Other Cincinnatians who spend their summer at the lake have taken an interest in the business to the extent of contributing their own personal touches. Mrs. Edgar Lotspeich provides a variety of yarn goods, while Mrs. William H. Hopple Jr. supplies knitted sweaters. But perhaps the most unique items are made by the proprietors themselves. With imagination and initiative, Mrs. Minor and Mrs. Sloneker have decorated a number of perky hats, including one that has a little bear sitting on top which actually knits when wound up! Other items include Walloon Yacht Club glasses, candlesticks that were shown in the Cinclnnati Art Museum, toy baskets for the children, English charcoal buckets and decorative, laundry bags. Mrs. Minor is the mother of Ann, John Jr., and Thomas. Mrs. Sloneker also has three children; Emme, Howard, III and Helen. The husbands and children of these business partners are loyal supporters. "We're always willing to help them solve any problems they have." said Mr. Sloneker. "The only thing we ask is that they keep it as a hobby-business venture and enjoy it" The shop' name, the "Inch & Foot," is a clever p!ay on the size of the establishment and its location at the foot of Walloon Lake. Mrs. Sloneker arranges some of the ingeniously decorated hats on the white lattice screens. Mrs. John S. Minor is seen with some of the attractive wares they have collected from far and wide."

The former pointy topped roofed barber shop had been converted to the Walloon Lake Post Office in 1949.
The building (in the article below) always had the unique pointy topped roofed, obviously missing,
perhaps removed for the moving, in the photo below. 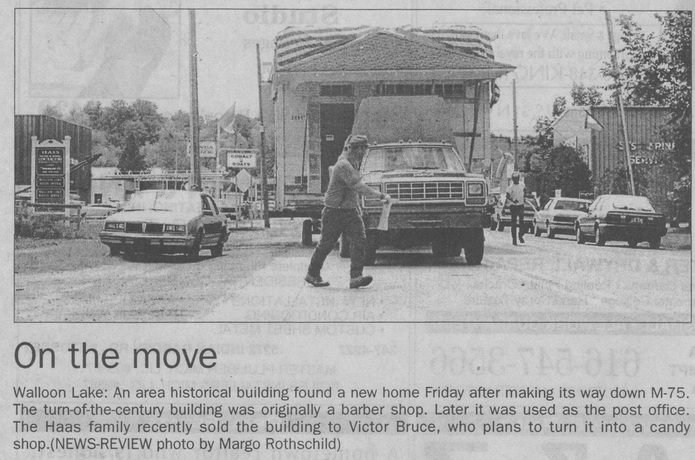 In the 1950's the post office was housed in a small building that resembled a cottage with a small front porch.
It was located right next to the Melrose Township Park, opposite to the Walloon Lake Public Beach.
This building can be seen in a photo on this website on the Memorial and Park webpage. 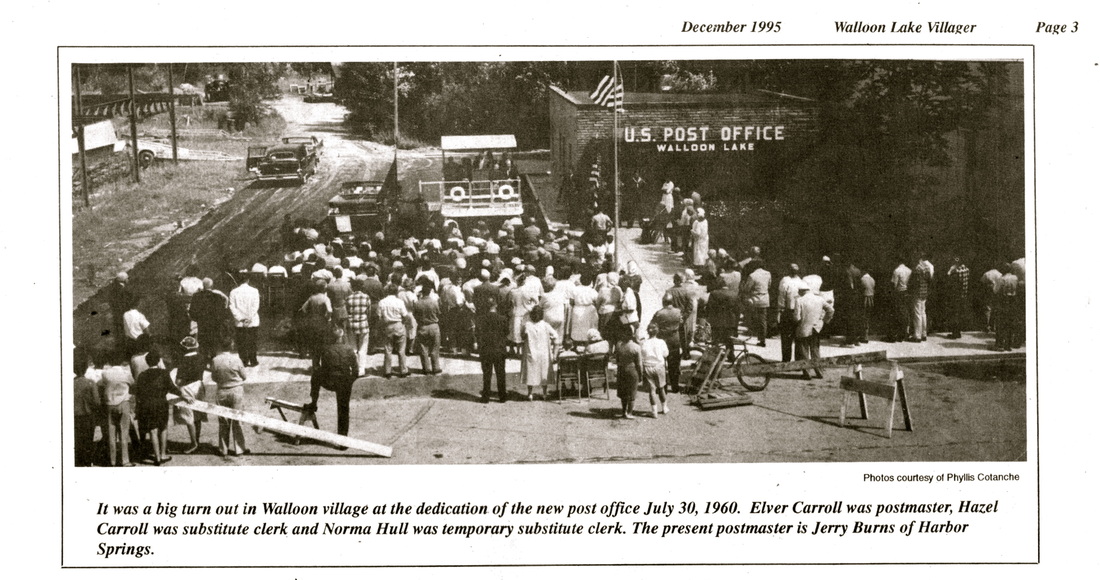 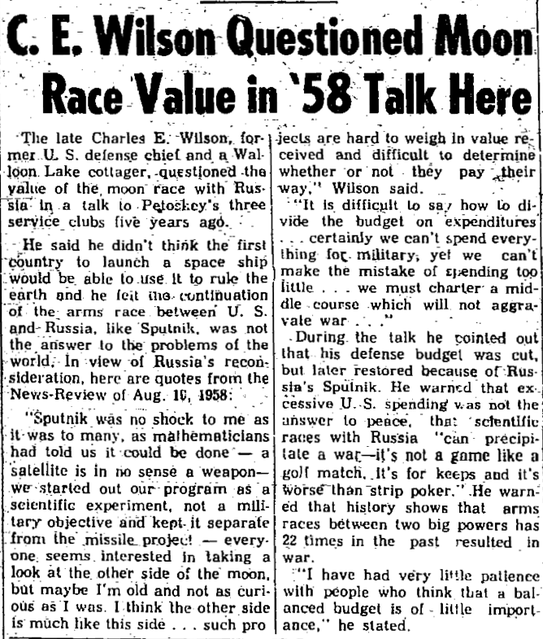 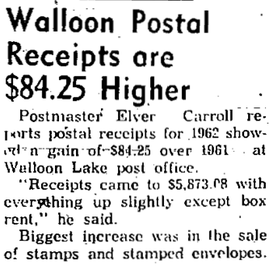 8 February 2014 ~ Johan's Pastries uses the same building for their business as was used for the US Post Office of the Village of Walloon Lake in the newspaper photo above.
Photo Below: Elver Carroll was the Postmaster for the Walloon Lake Post Office for many, many years. 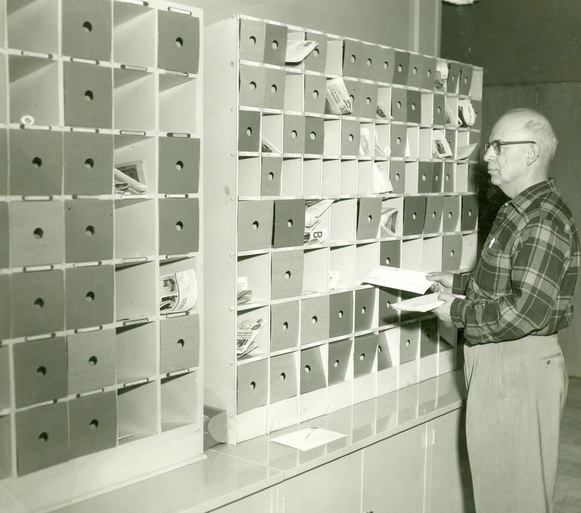 Postmaster Elver Carroll ~ Submitted from the Collection of Eddie May
1971 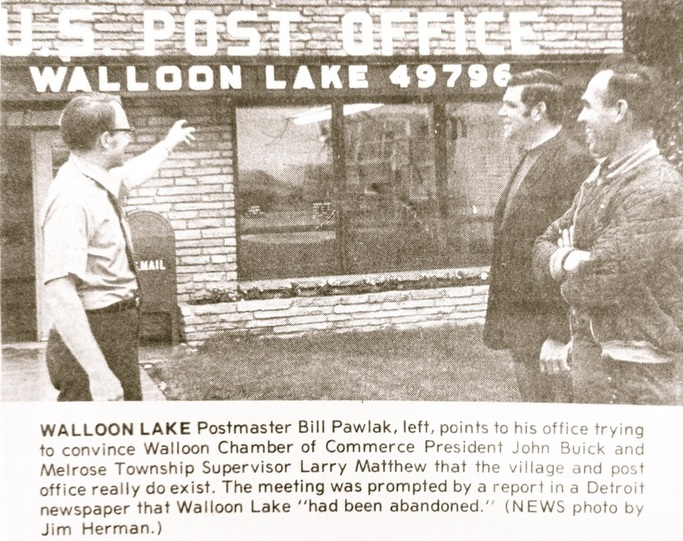 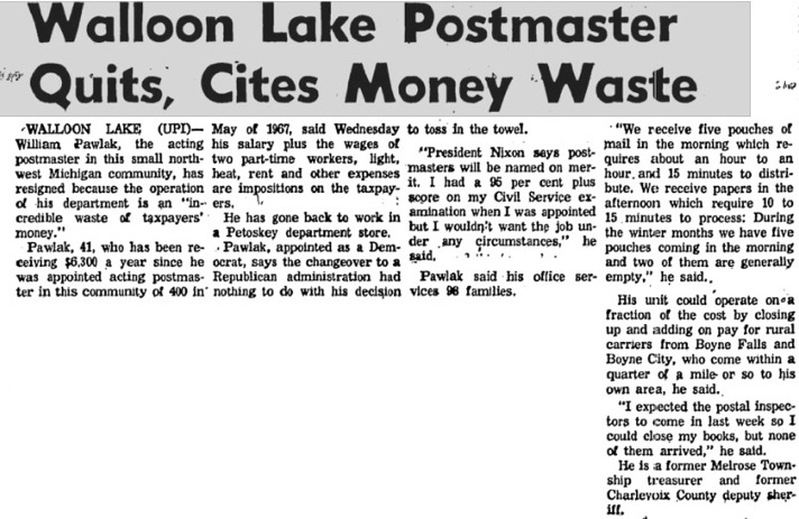 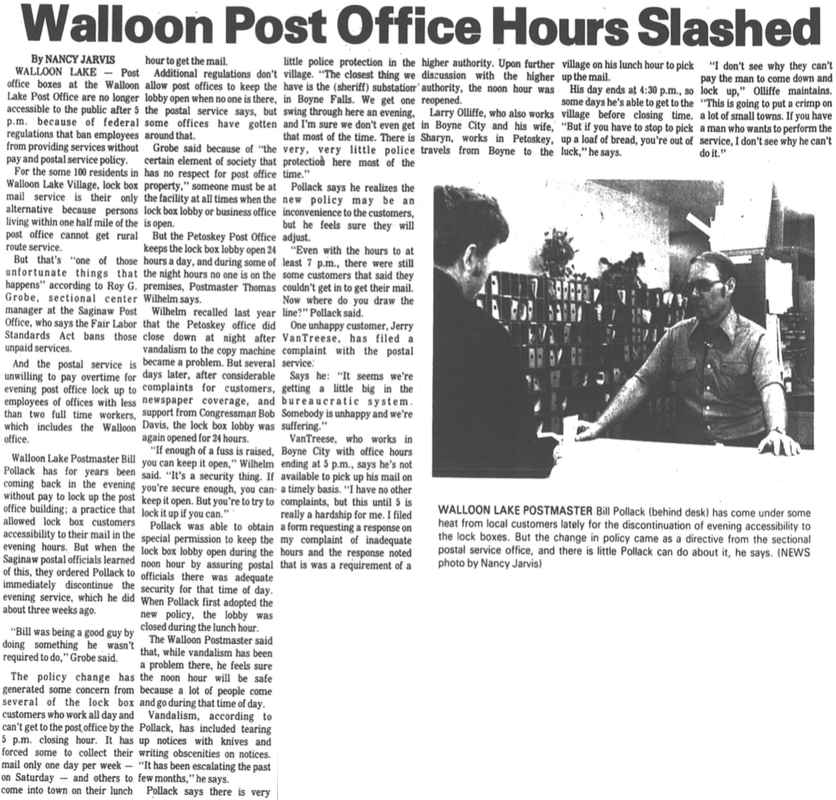 30 January 2002 ~ Traverse City Record- Eagle
Photo Below: In 1979 the pointy roofed building, once the Walloon Lake Post Office,
was housing Betty's Klothes Kloset as seen in the advertisement.

The small building had been a barbershop when it had been located next to The Koneta General Store,
and also had been a store called the Inch & Foot Gift Shop. 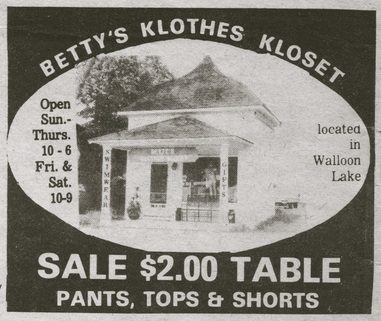 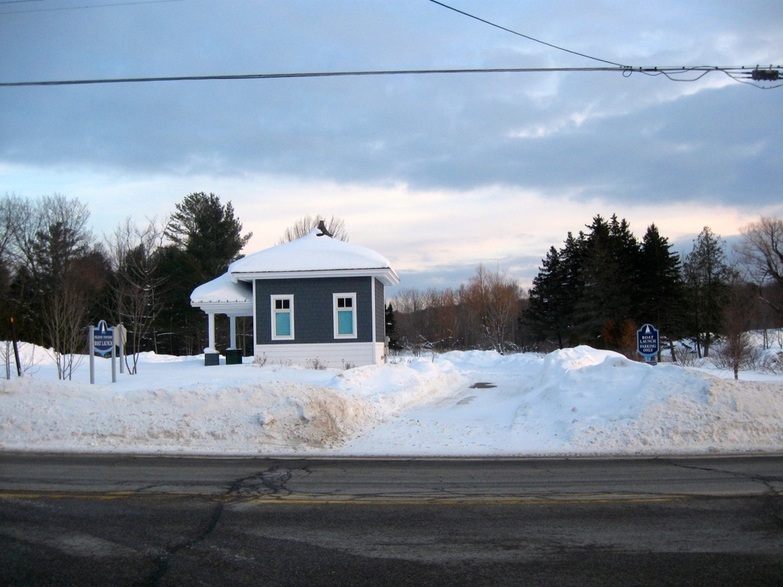 8 February 2014 ~ NOT a post office building, but similar in appearance, and located on the corner just across the street from the little building above
PRESENT DAY
US Post Office in the Village of Walloon Lake
4149 State Street Walloon Lake MI 49796
231-535-2421 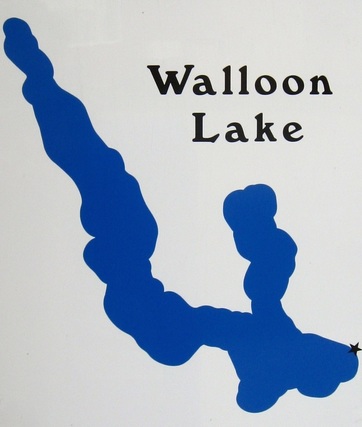 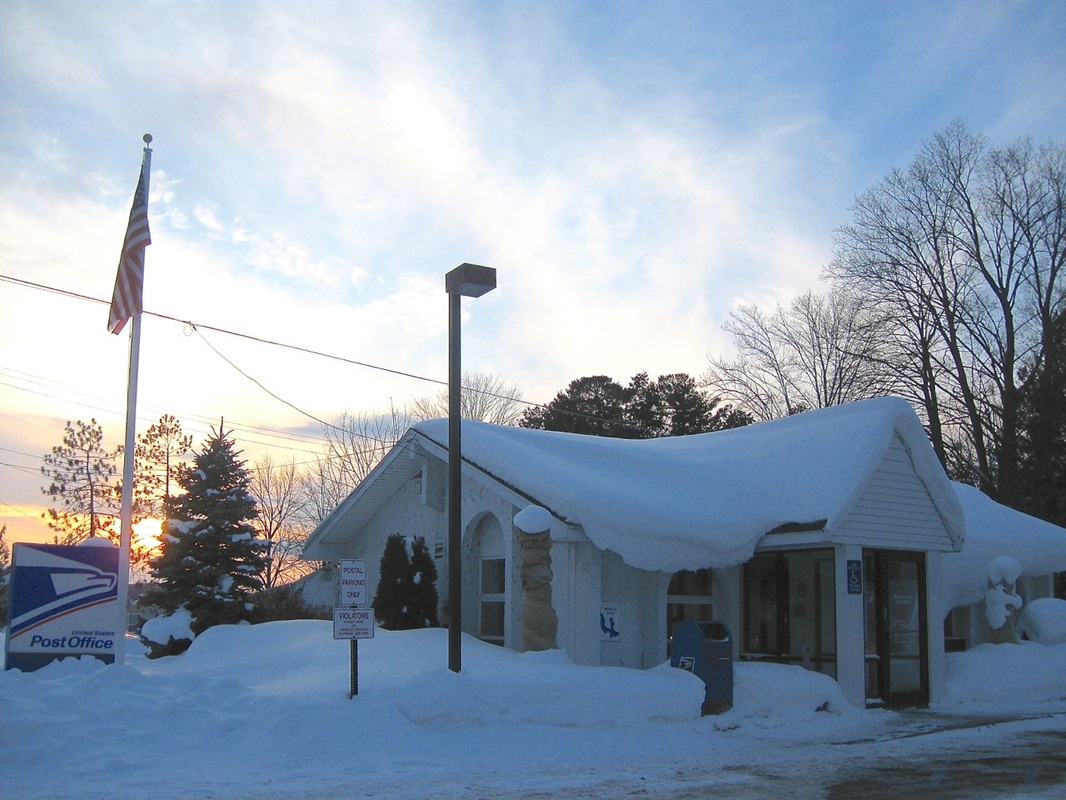 8 February 2014 ~ US Post Office in the Village of Walloon Lake (previously this building housed a bank)
Michigan Place Names: The History of the Founding and the Naming of More by Walter Romig
listed William Hoagland the first postmaster of Walloon on May 9, 1883.

Michigan Place Names: The History of the Founding and the Naming of More by Walter Romig
Walloon Lake Post Office
Posted on August 2, 2012
Walloon Lake, Charlevoix County: Established as Walloon May 9, 1883. Discontinued May 7, 1884. Reestablished as Talcott Oct 19, 1897. Name changed to Walloon Lake Sept 22, 1900.

This above entry, with additions, was posted in Michigan Post Offices by Frank Burns. (Frank Burns is a retired US Postal Service employee of 38 years.) 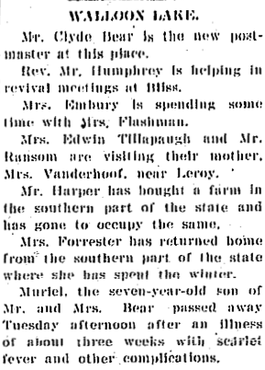