The design and compilation of the text and photos on this site are copyrighted 2014.
The properties in the photos below are all unidentified. The photos were all submitted from the collection of Ross Renwick (except as noted), along with other photos definitely related to Walloon Lake, so it is assumed that these unidentified photos are connected somehow with Walloon Lake, as well. If anyone can identify any properties in the photos, or identify the surroundings in the photos, please refer to the number listed below the particular photo, and let me know. I would like to place the photos of the cottages into the correct "Arm or Shore" category of Walloon Lake on this website. ~ Karla Howard Buckmaster

Photos 50 and 51 below: The Nickey property North Shore definitely identified by Elizabeth Nickey Neilson (also Photo 130 below).
Photos 54 and 55 below: Longtime Walloon Lake resident Charley Zimmer wrote "I believe the photos numbered 54 and 55 are from the Indiana Beach area, which is located in the West Arm on the North side before you get to the narrows. It is in the little cove area after the Warfield house and before you get to the point."
The location of 59 and 60 above, is the South Shore Drive west of the old Thomas House and shows the sidewalk starting at the Penniman Cottage and moving west. Photo 59 shows the Penniman Cottage, the Anolich Cottage with the curve in the sidewalk the start of the Peterson property. In photo 60 the walkway leading off to the right was a bridge to the top of the Bugg's boathouse.
~ Identified by David Sedestrom

House photos below, of Dr. Waldon who had a boat named "The Brothers" thought to be the fastest of its kind on Walloon Lake.
Dr. Walden's Estate had two miles of shoreline on Walloon Lake.
Where did he live?

The location of the property (73, 74, and 75) of Dr. S.D. Walden of Chicago, has been described as on the west side of the South Arm.
Photo 93, 94, 95, and 96 below: Located on West Street close to the village. Owner Paul M. Heydenburg.
Photos 97, 98, 99, 100, and 101 below: The Locust Lodge was moved across the ice by Jones in the 1920s
to its present location at 1440 North Shore Drive as stated in the book Walloon Yesterdays. (unless other information is known)
Photos 102 and 103 above of the Beuret's Cottage Twin Pines, according to a 1910 Petoskey Evening News article was located on the North Shore.
Photos 104A and 104B above are the Frenzel Cottage located on the South Shore Drive west of the old Thomas House. Otto Frenzel was one of the original owners of the properties on the shoreline here and he built cottages for his children that are now owned by descendants such as the Sweeneys, the Arts/Warrens, and the Buckwalters, etc.  It is the Buckwalters who now own the house pictured here.
~ Identified by David Sedestrom 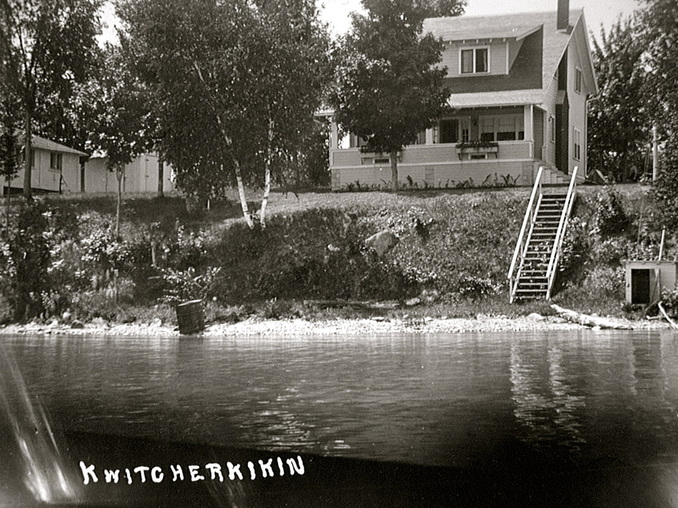 105 ~ Kwitcherkikin Built in 1923 with owners Henrietta Frenzel Sweeney and her grandson Robert Sweeney II ~ WHERE Located?
Kwitcherkikin in Photo 105 above is located on the South Shore Drive west of the old Thomas House. ~ David Sedestrom
Photos 115 and 116  below: In the 1930s Reverend Hugh Craven bought this home from the Watson Family as noted by
Reverend Craven's grandchild, Lee Ehinger.
The home is located at 2073 North Shore on the corner of North Shore and Lee Street. 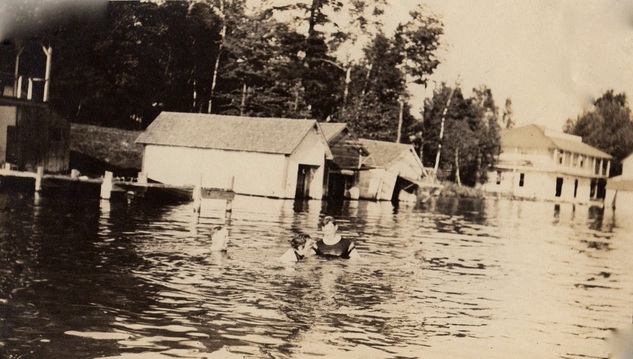 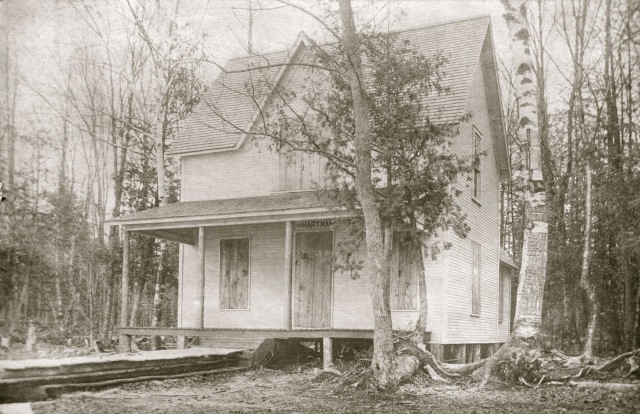 127 ~ Sign States "The Hartman"... Where Located, or Owner Names? Submitted from the Collection of Original Postcards of Marcia Maves 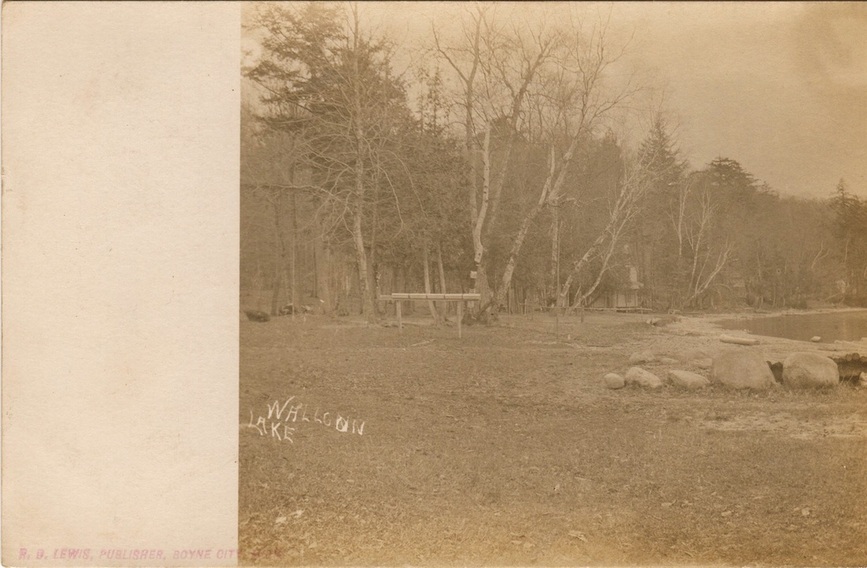 128 ~ WHERE Located? Cottage in background with possibly a row of mailboxes? or newspaper boxes? Or does anyone know what that is for sure? ~ Submitted from the Collection of Original Postcards of Marcia Maves 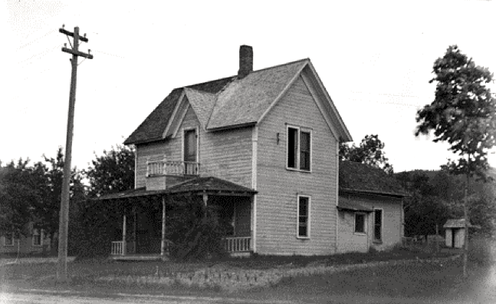 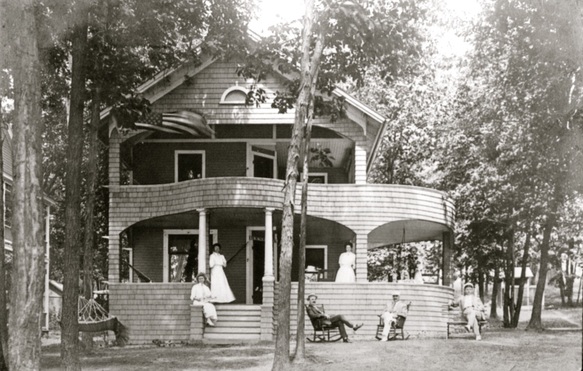 136 ~ Submitted by Dean and Marna Wheaton to be viewed only on this Walloon Lake Wanderings website
Photos 137 & 138 Below: Could this building be a hotel rather than a cottage? Notice the round item in the front, perhaps a fountain? 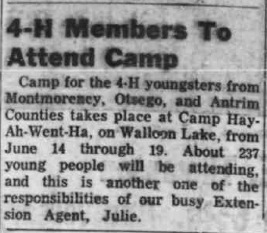 If you can shed more light on anything about this Camp, please click on my name below to e-mail me.
Karla Howard Buckmaster
"The following information may be related: "Hayo-Went-Ha Camp for boys, conducted by the State Committee of the Young Men's Christian Associations and recognized as one of the foremost in the world, begins its fourteenth season with the summer of 1917. The camp is located on Torch Lake, the largest and one of the most beautiful inland bodies of water in Michigan. Mr. F. P. Knapp will again act as camp director and associated with him will be men of national reputation in work with boys. The equipment of the camp is as fine as can be found anywhere, including a clubhouse, spacious dining lodge, tennis courts, baseball diamond, boats, etc. Fifty-five acres of wooded land away from resort influences make it an ideal camping spot."


Also, the following website may have a connection: YMCA Camp Arbutus Hayo-Went-Ha for Girls is located 10 miles southeast of Traverse City, MI on Arbutus Lake. 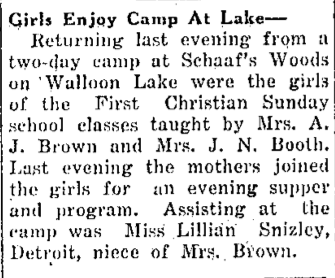