The design and compilation of the text and photos on this site are copyrighted 2014.
Most posted items will enlarge by "clicking" on them.
"Clicking" on some color highlighted words may access additional information.
Charter Members 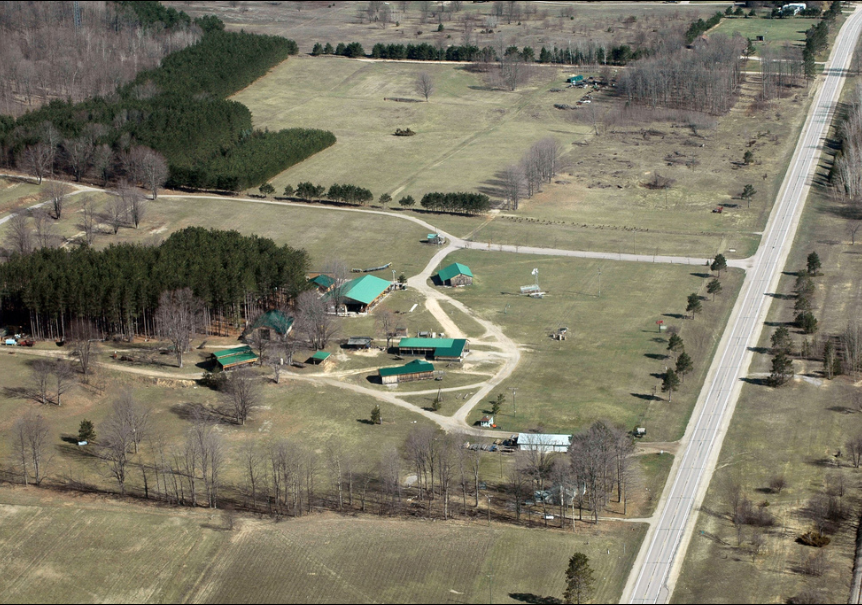 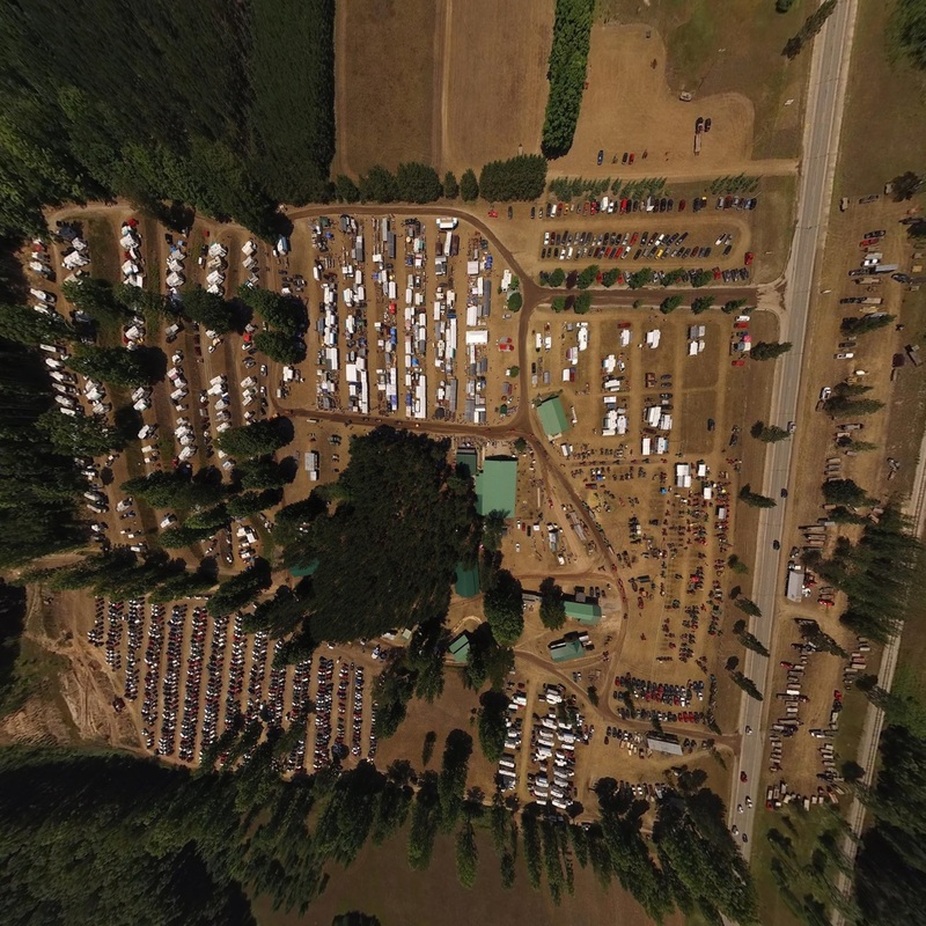 "We owned several cars during the time we lived in HILL-AN-DALE (Whitfield cottage on the Seven Hills), but none could hold a candle to either one of those Jeeps. The first was a 'Chrysler 50', but for building the first house I bought an old 'Dodge Commercial' from Lawrence Clink who sold cars for Brown's Dodge Agency. It was an 'oldie' which Bremmeyr-Bain Hardware thought they had worn out, but as I just needed a truck to do odd jobs, haul dirt, logs, tools and about everything else, I thought I'd just keep it a year or so and it would be very handy for many uses. Never did I think that I'd keep that truck for some forty years, make a real 'snow-goer' with treads out of it and wind up giving it away to Larry Mathews, together with the title, which I had kept all those years. It was a 1925 model and Larry was going to fix it up and show it off at antique car shows. It would have made a hit, too, as not many trucks of that vintage still exist. Chuck Sherk and I had made new wheels for it as the original ones had developed squeaks. But I had had to cut most of the back fenders on both sides in making it into the 'snow-goer' and had thrown away the parts I had cut off, so it wouldn't have been possible for it to be shown as a complete antique truck. But that was a good old truck. It hauled many a load from town in summer and in winter I would just have to carry along the two treads when I got to the hilly and snowy part of the road, and to make darned sure of my progress I just had to stop, get out, lay the chains and treads on the pavement behind the rear wheels, roll the truck back a few feet onto the treads, hook them up and I was all set to go most anywhere there was a road. That was long before the days of Jeeps, but I always dreamed about some day owning some kind of a vehicle which would enable me to negotiate the Northshore Drive in the winter with all the hit and miss of early day snow plowing. In those very early days about the only snow-plowing we got was when some local farmer with his team was hired by the township board to drag a couple of V-shaped planks up the road. This didn't do much actual plowing, it mostly spread out what snow was already in the road but it did make driving over it much easier. Finally when the building and maintenance of the roads was delegated to the county that body came up with some light and then heavier trucks with plows on them and this was a vast improvement, except when they got stuck, which often happened. Now their trucks are equipped with radio, so they can call in to the headquarters for help."
~ James C. Whitfield, Sr. 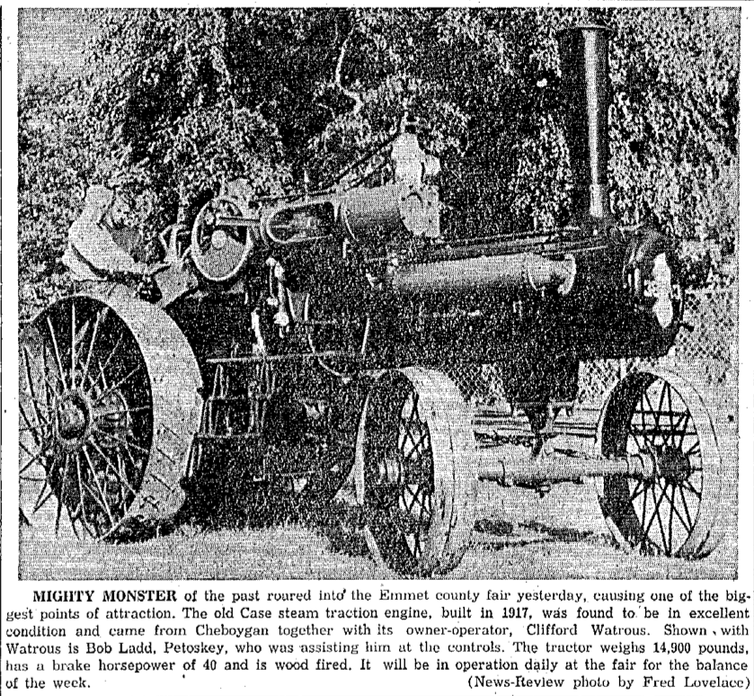 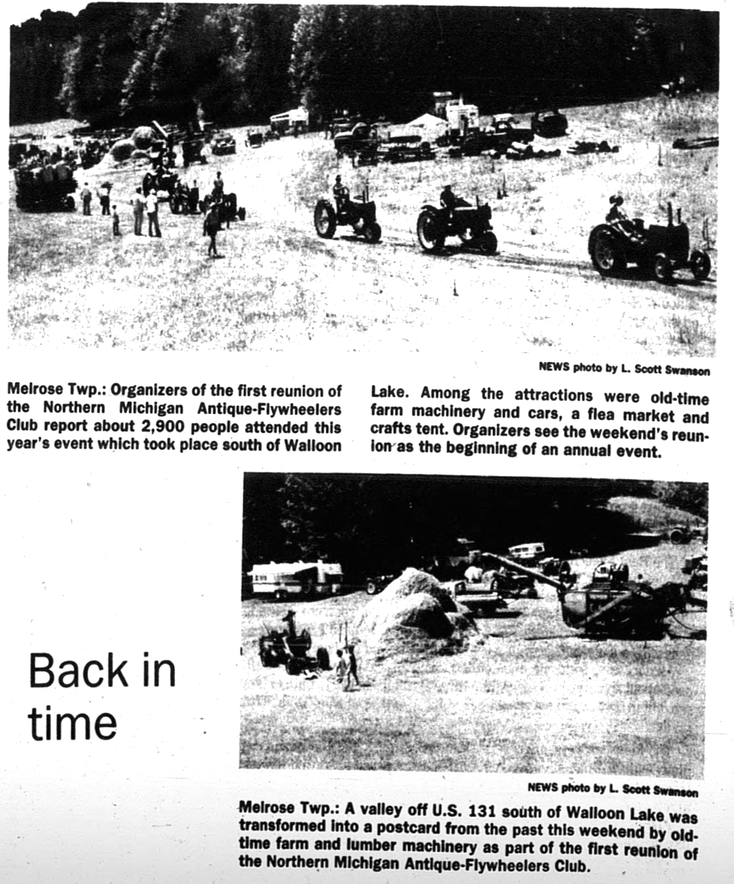 1 August 1988 ~ Petoskey News Review
1991
A program from the 4th Annual show of the Northern Michigan Antique-Flywheelers has been submitted by Norm Stevens.
Pages of the 1991 program are featured in photos below. 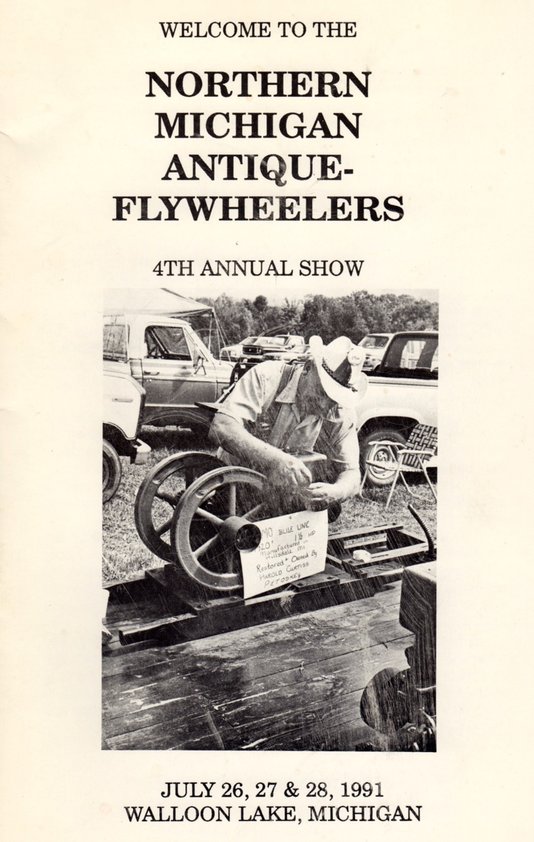 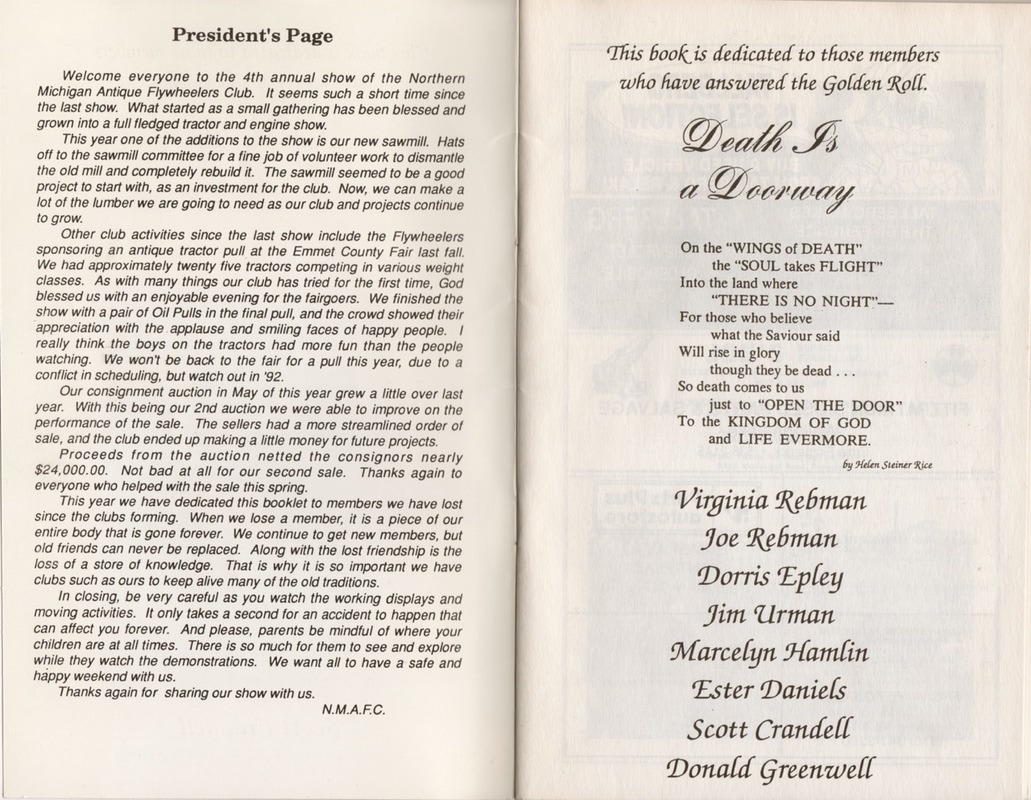 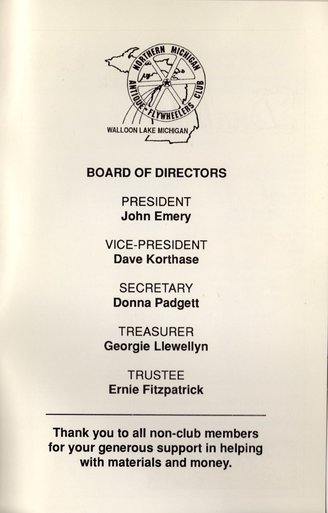 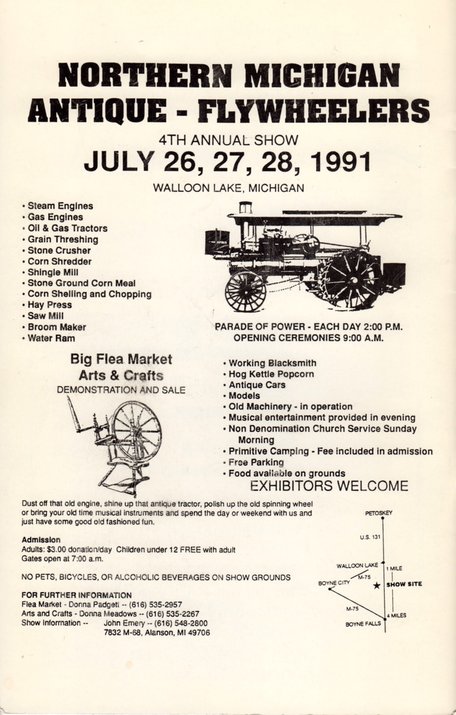 Back Cover of the 1991 Northern Michigan Antique- Flywheelers program booklet

The Ironton Ferry cab was donated to the Northern Michigan Antique-Flywheelers Club in September of 2013.
2014 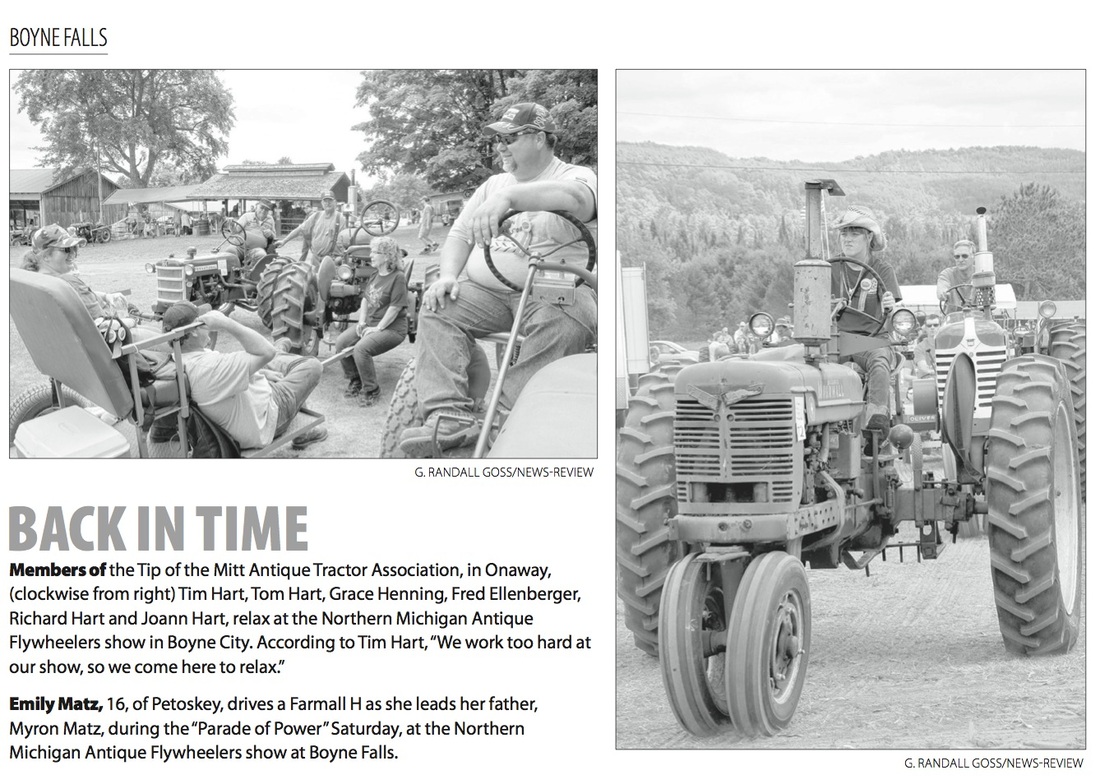 
The Antique Flywheelers Student Harvest Days is one of the many benefits the surrounding communities, and school students experience.

11 March 2016 ~ Petoskey News Review
2017
The 29 June 2017 Petoskey News Review reported: The Northern Michigan Antique Flywheelers have purchased a historic one-room schoolhouse which will be moved to the showgrounds. The Huddleston school building had been in Pellston and was purchased in memory of the late Louie Fotchman who had many connections to school buildings; having attended a one-room schoolhouse himself, and also having worked for Petoskey public schools for 28 years. This building will be a great addition to the other buildings which the Flywheelers already have on their grounds... Northern Michigan Antique-Flywheelers Club 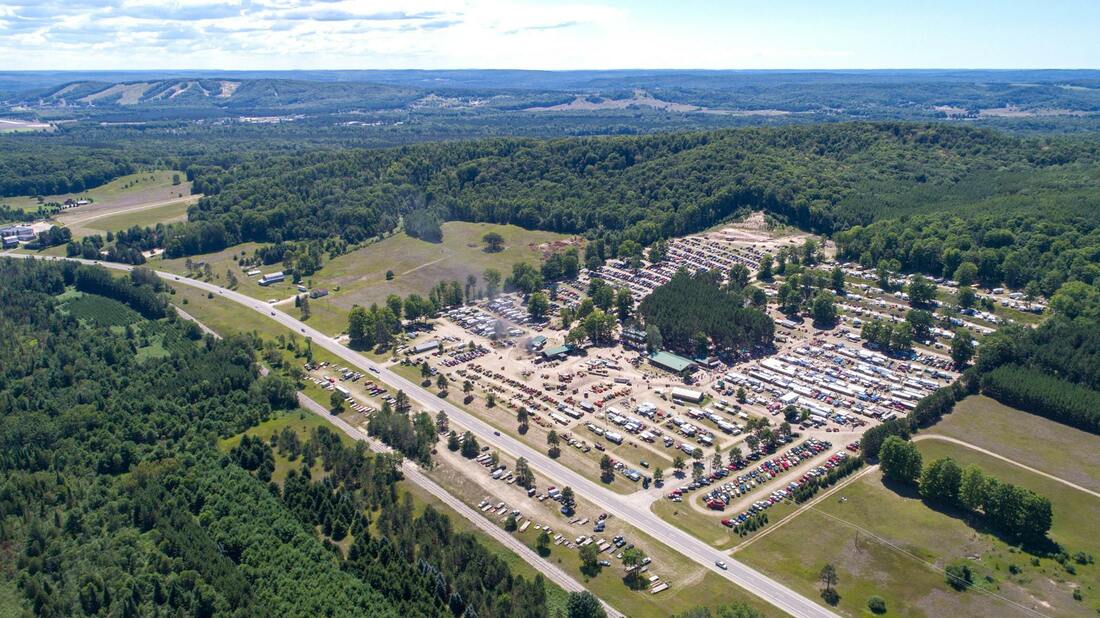