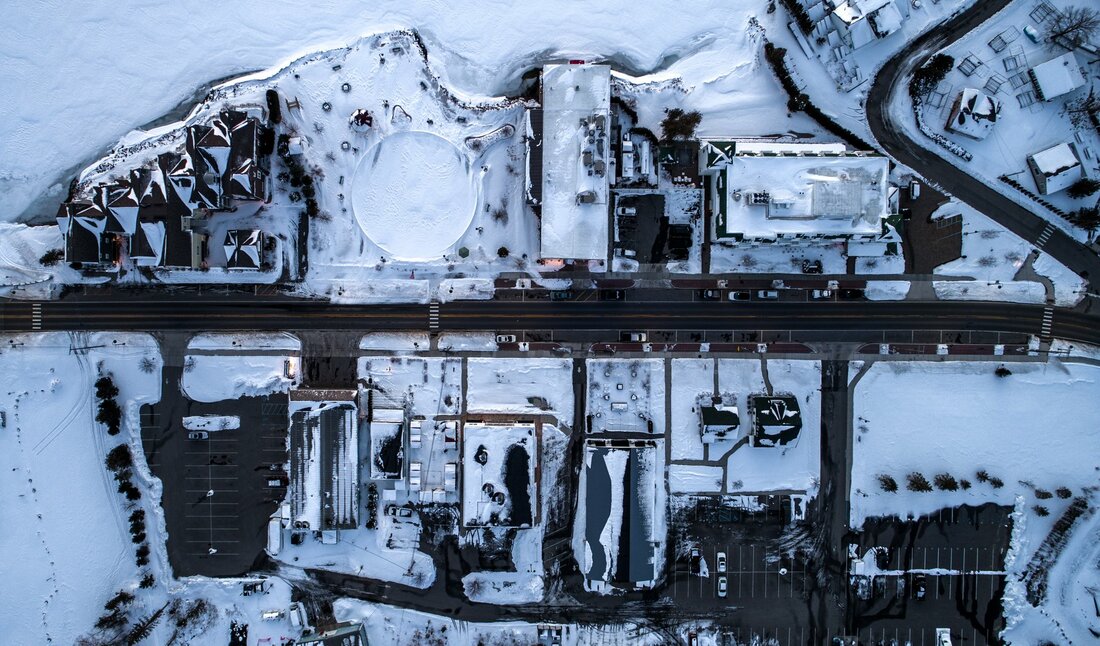 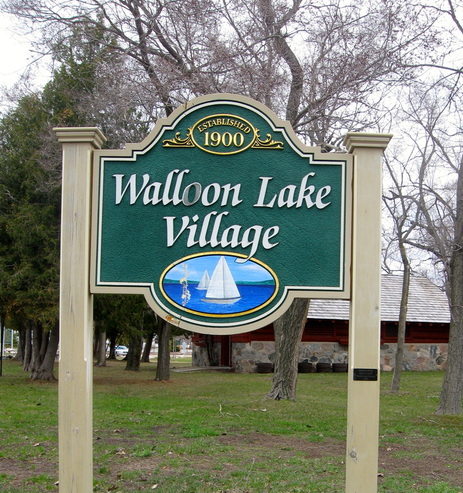 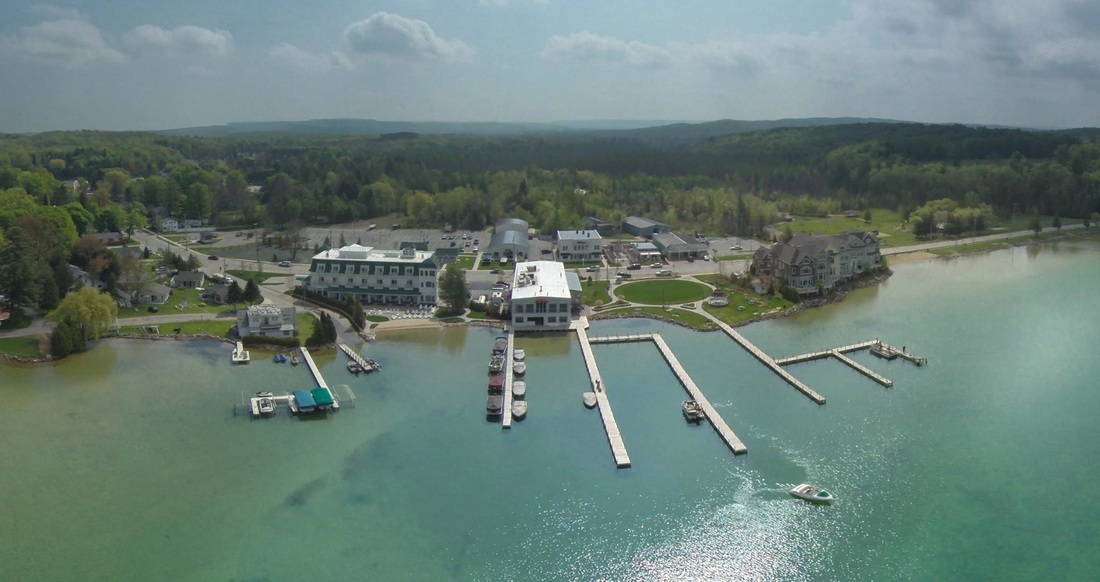 Posted only by Permission from Drone Photographer Charles Dawley
Compare the changes in this above photo of The Foot taken 18 May 2015 to the old undated (perhaps 1960-61) photo in the header above. 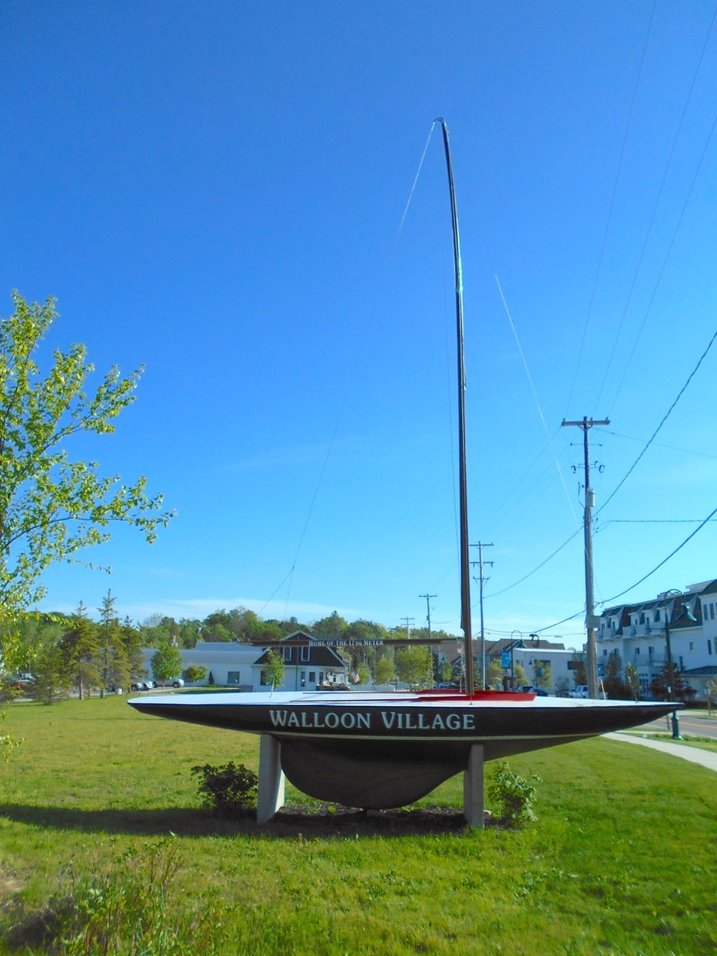 View of "The Foot" From Up on a Hill 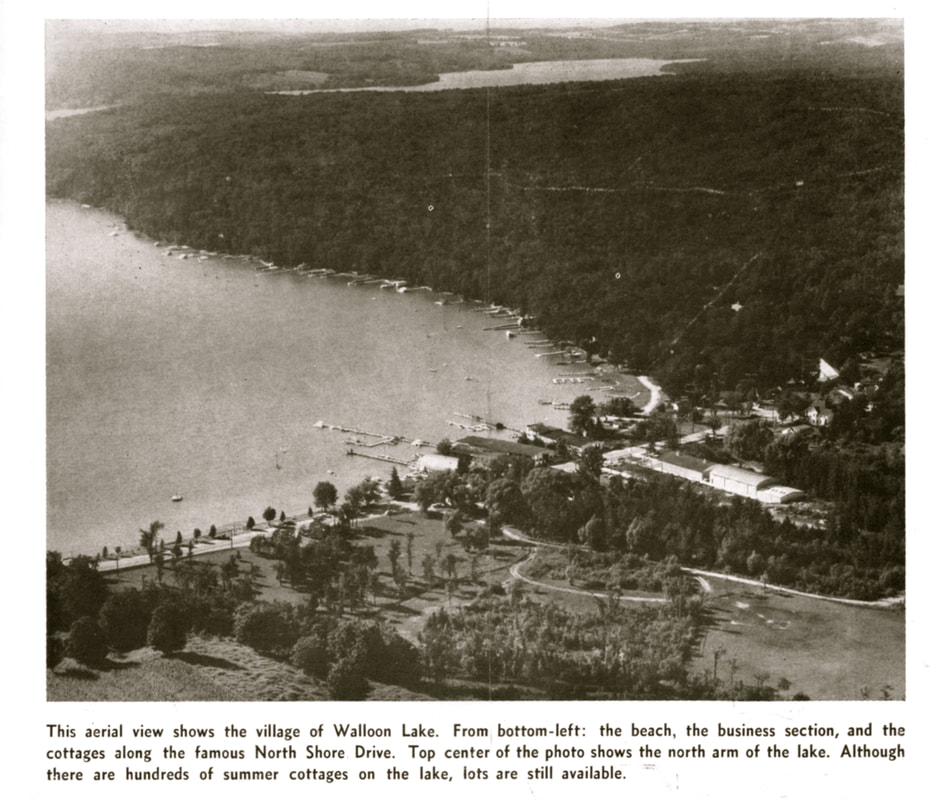 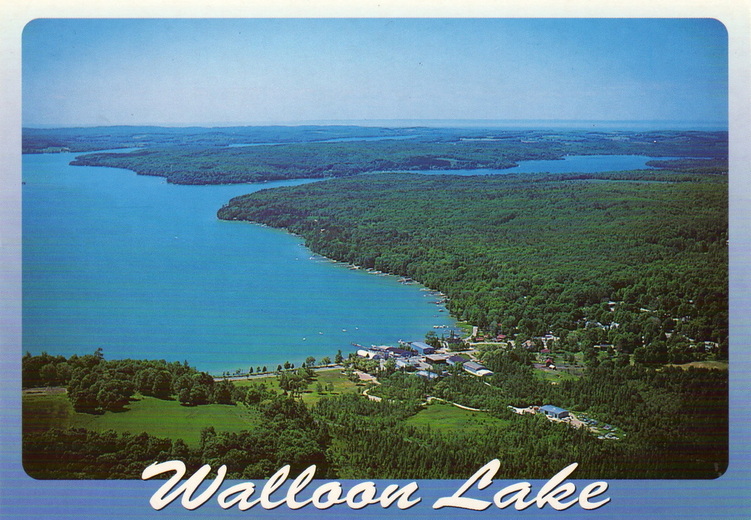 This old postcard appears to show the quonset hut still standing at "The Foot". 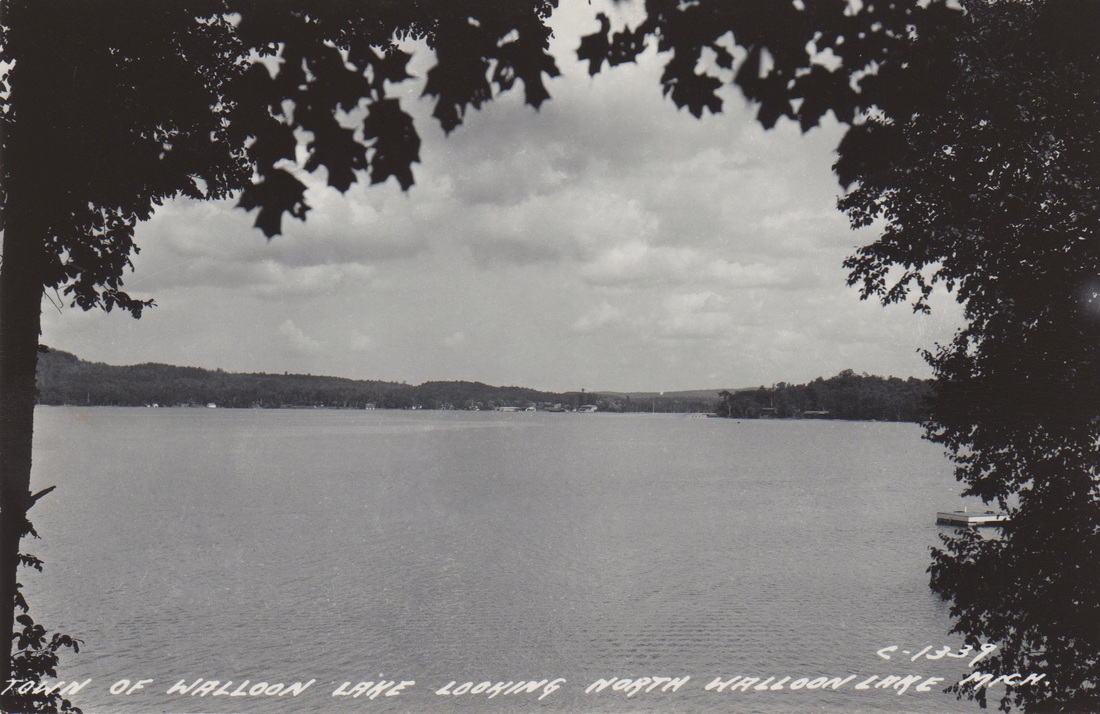 The Foot on the Far Shore 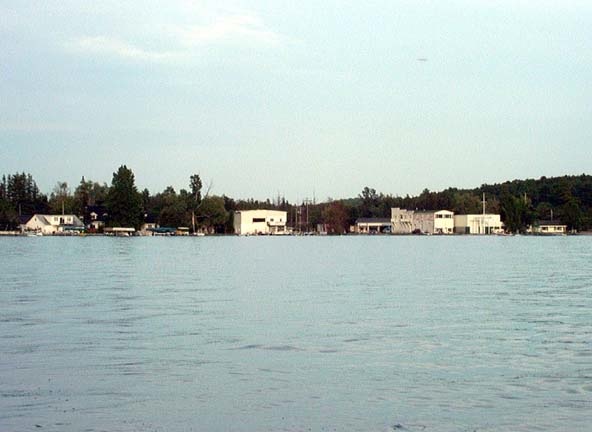 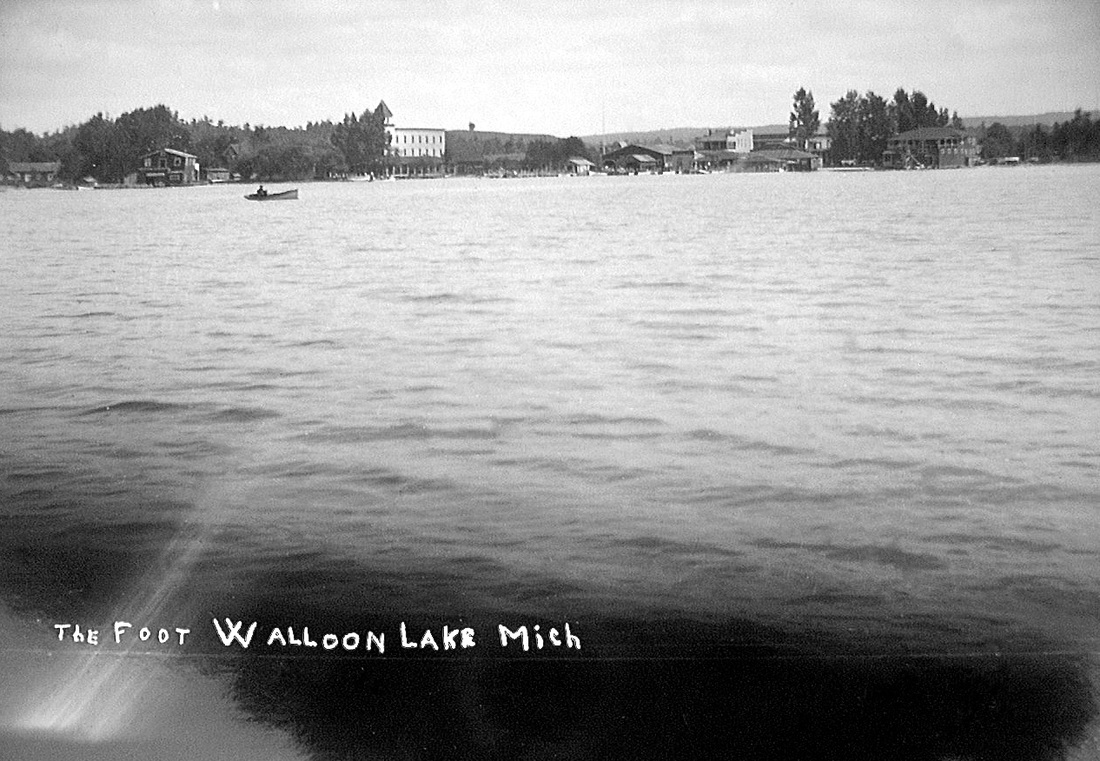 Submitted from the Collection of Ross Renwick
The photo below was taken from the vantage of Moira Hill, the Cawthra Property...
showing "The Foot" of Walloon Lake looking at the North Shore. 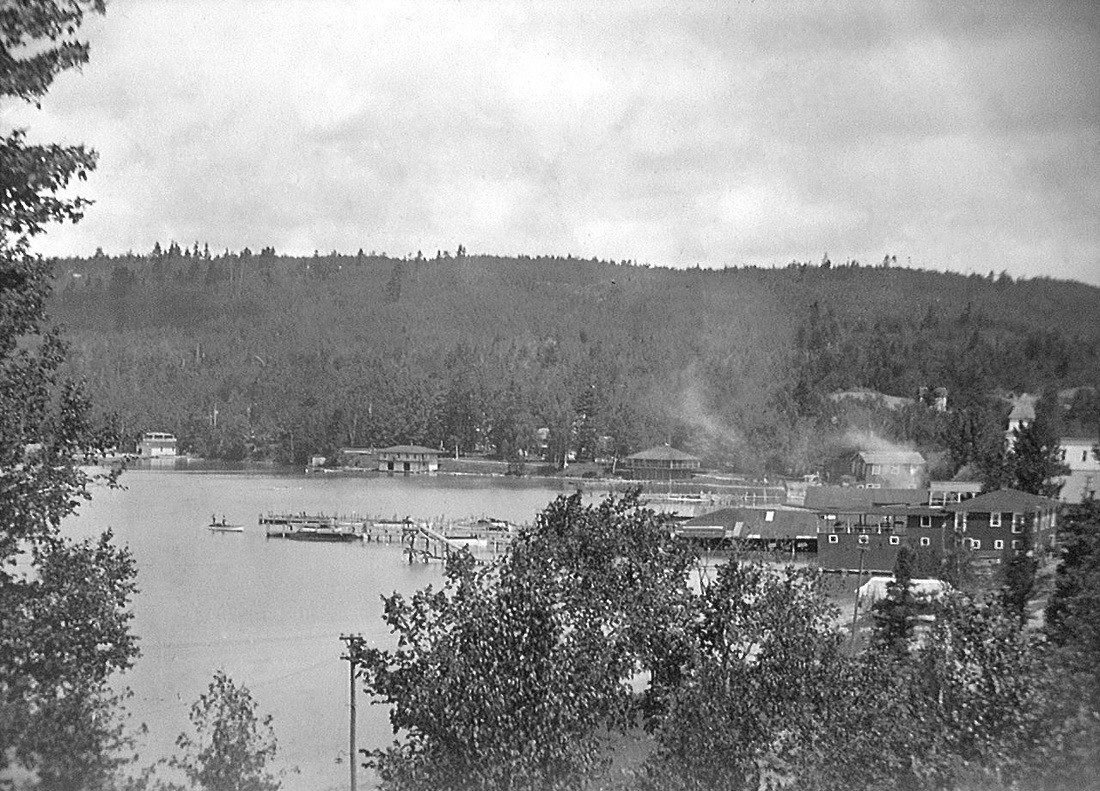 Submitted from the Collection of Ross Renwick 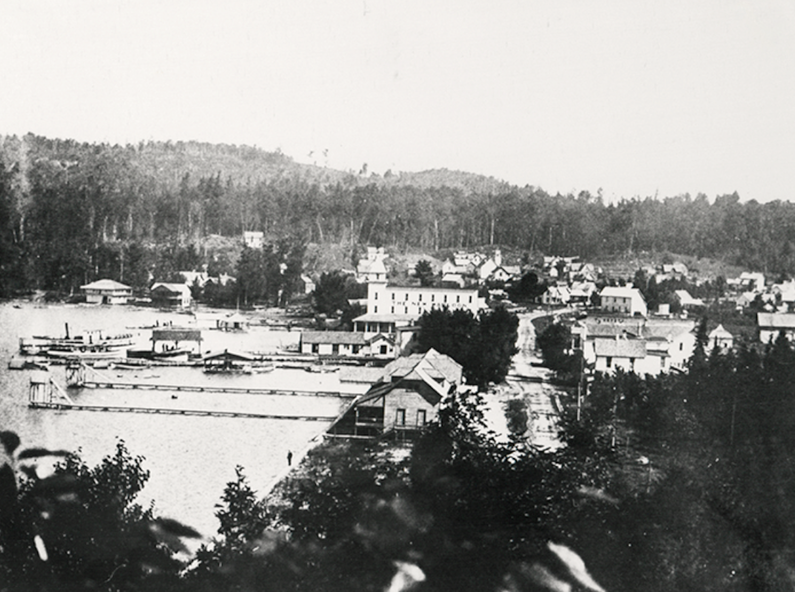 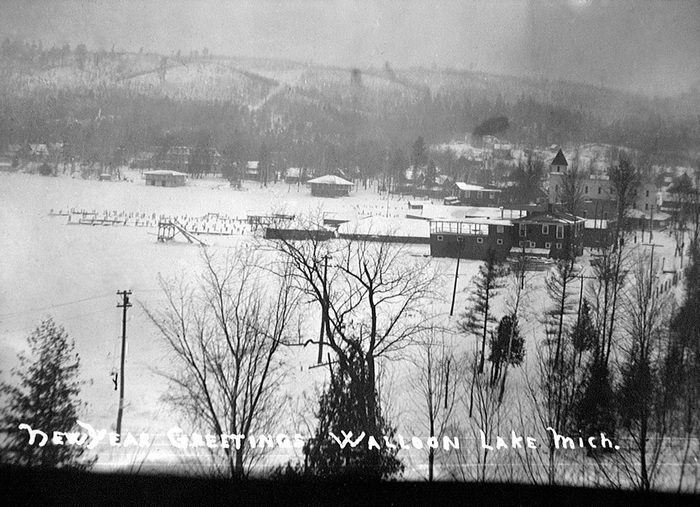 Submitted from the Collection of Ross Renwick
Photo Below: Accompanying text stated: "Someone said, in viewing this picture of Walloon Lake about the turn of the century, that it hasn't changed much. This view shows some of the then downtown area in the wintertime after all of the tourists and resorters had long gone home to the big cities. The main street must have been a dirt road back then, just look at the wagon tracks in the snow." (Compare this photo below top, with the 2014 directly below it, for a similar photo perspective.) 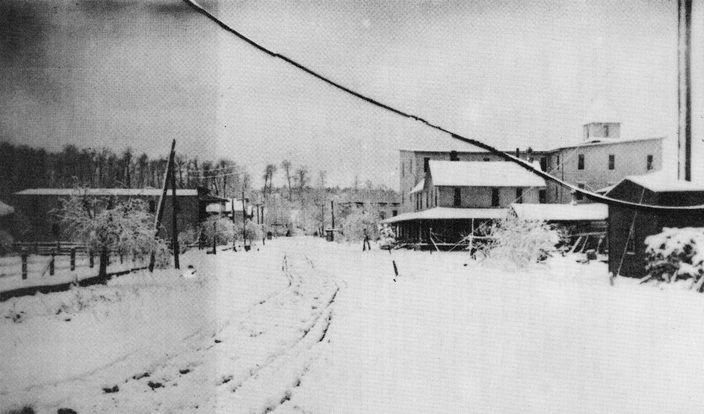 Submitted from the collection of Eddie May 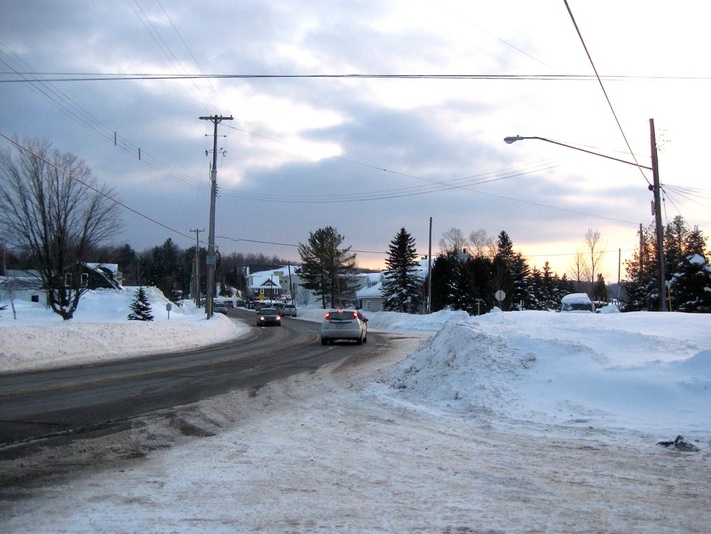 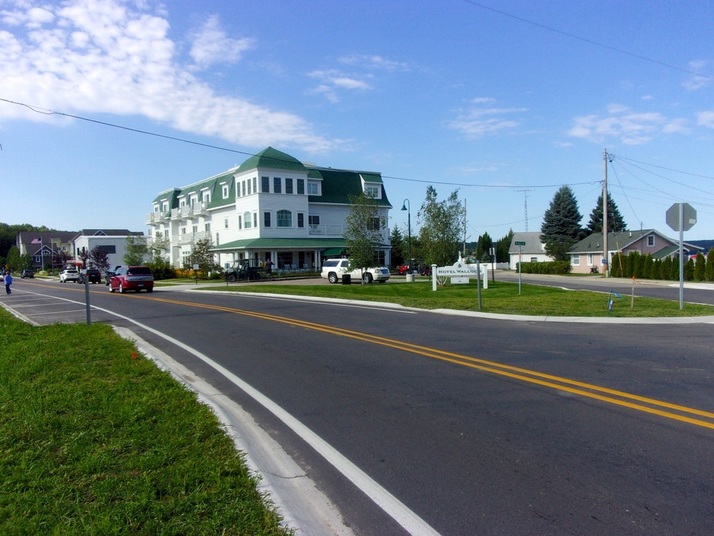 23 August 2016 ~ Heading into the Village of Walloon Lake with the new streetscape and curbing outlining the main street by the Hotel Walloon
1907 ~ FIERCE FIRE AT WALLOON LAKE
The postcard photo below was dated Aug. 5.07,
the actual date of the horrific Walloon Lake Village Fire written about in the news articles above. 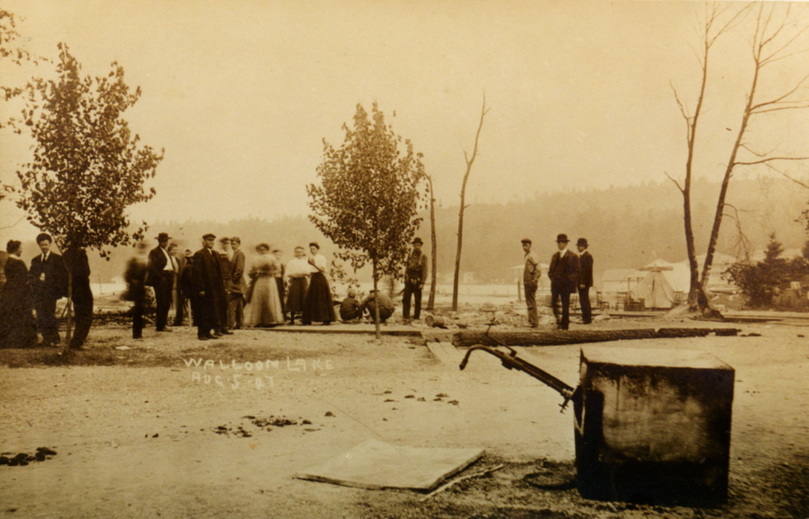 Submitted by Dean and Marna Wheaton to be posted only on this "Walloon Lake Wanderings" website.
Photo Above: The Walloon Lake Public Beach was behind, and next to the trees on the right.
The big letter "M" on the side of the building is the last letter in the owner's name ~ RANSOM.
Picturesque Walloon published 1911 described on page 12, THE VILLAGE:
"A quiet little hamlet surrounding the G.R. & I. station and steamboat landing, consists of three stores, a bowling, bath house, boat livery, boat factory, four hotels, two churches and post office. A beautiful spring of pure, cold water, one hundred feet above the village, has recently been tapped and piped to the business portion.
We do not boast of electric cars, paved streets and patrol wagons; we have nature's highways and byways leading through the quiet woods, or by the lake---a perfect body of water on which public or private boats may be run whither they will. No dust, no smoke, no noise---just nature's paradise." 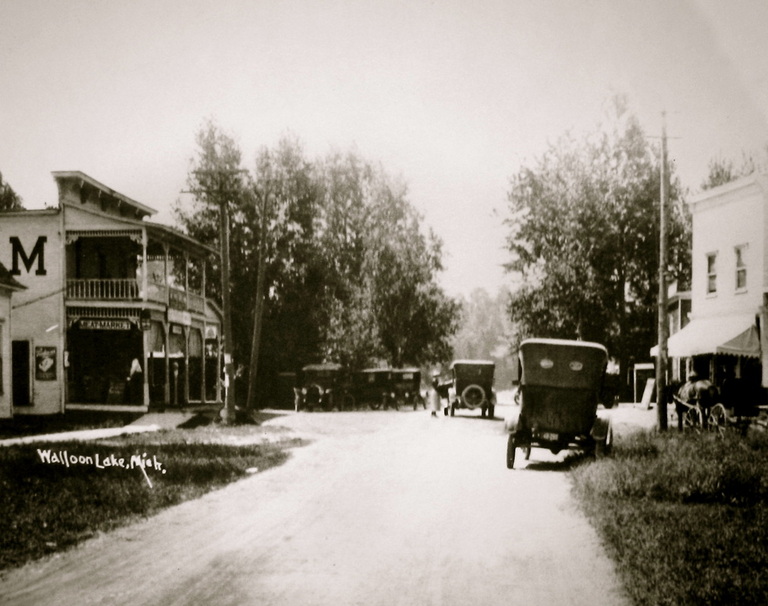 Submitted by Louisa Taylor
Below: 30 August 1912 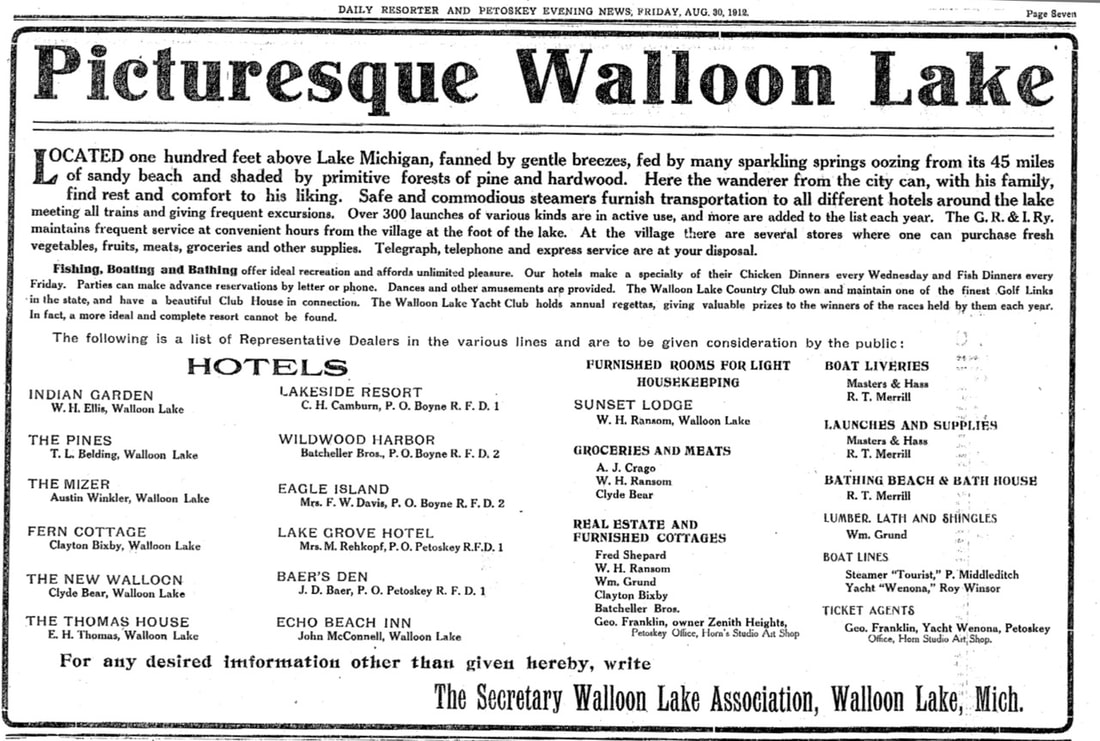 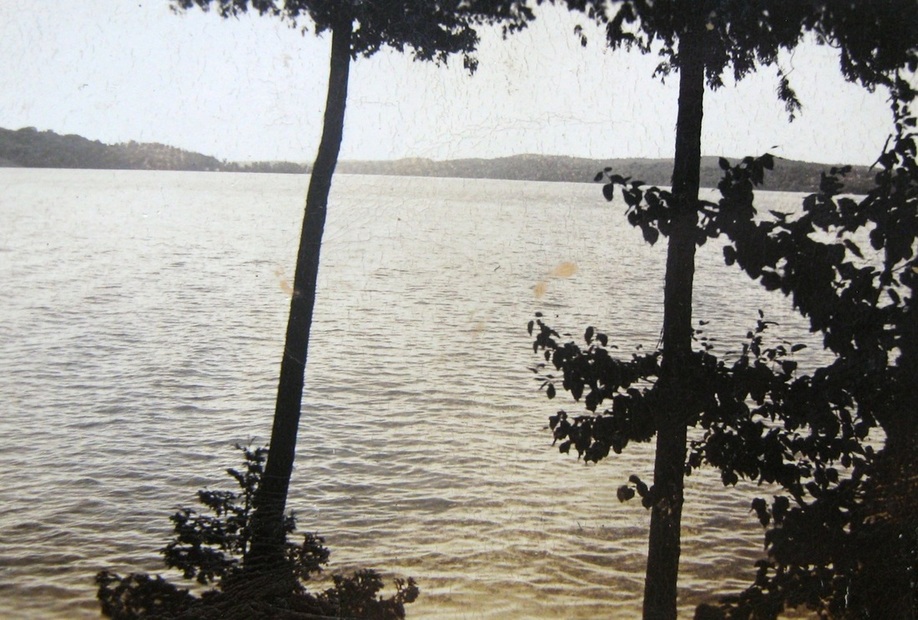 1950's of Walloon Lake taken from near the dam at "The Foot" ~ Submitted from the Photo Album of Arthur Stevens
Photo Below: Remember when roadsides were saturated with billboards? This 1952 article/photo shows specifically US-31 entering Petoskey from the North. About where the car is shown is where M119 branches off toward Harbor Springs. The text does say that "Charles Hayner of the Hayner Service station said that he has ordered removal of a sign on US-131 near the Walloon Lake junction and is taking down two other signs at his station on Spring street near Charlevoix Road. 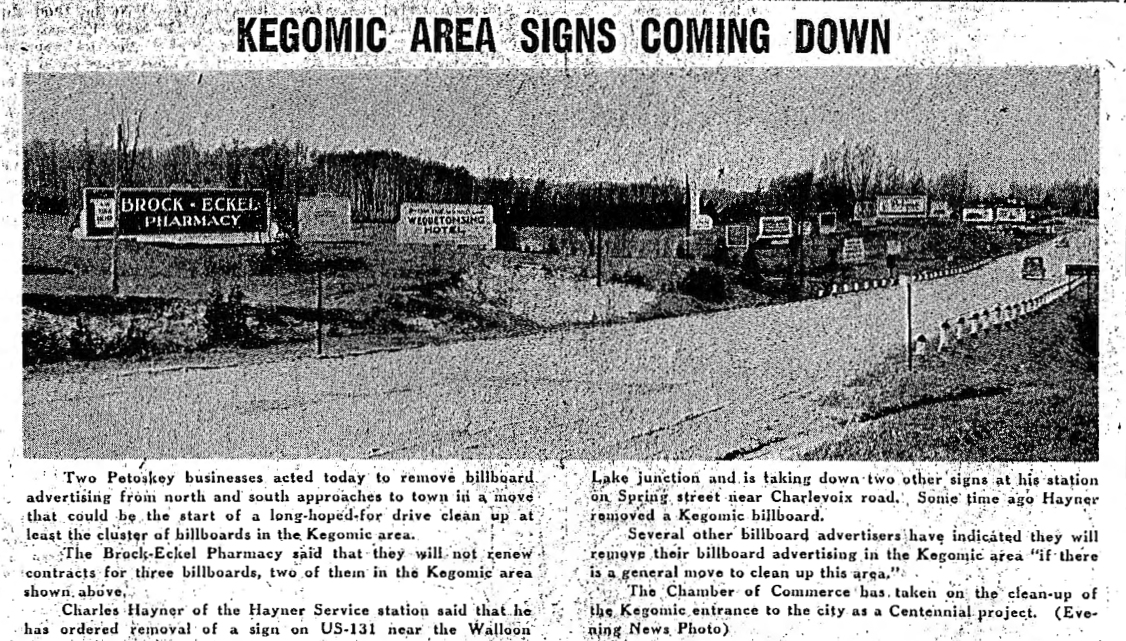 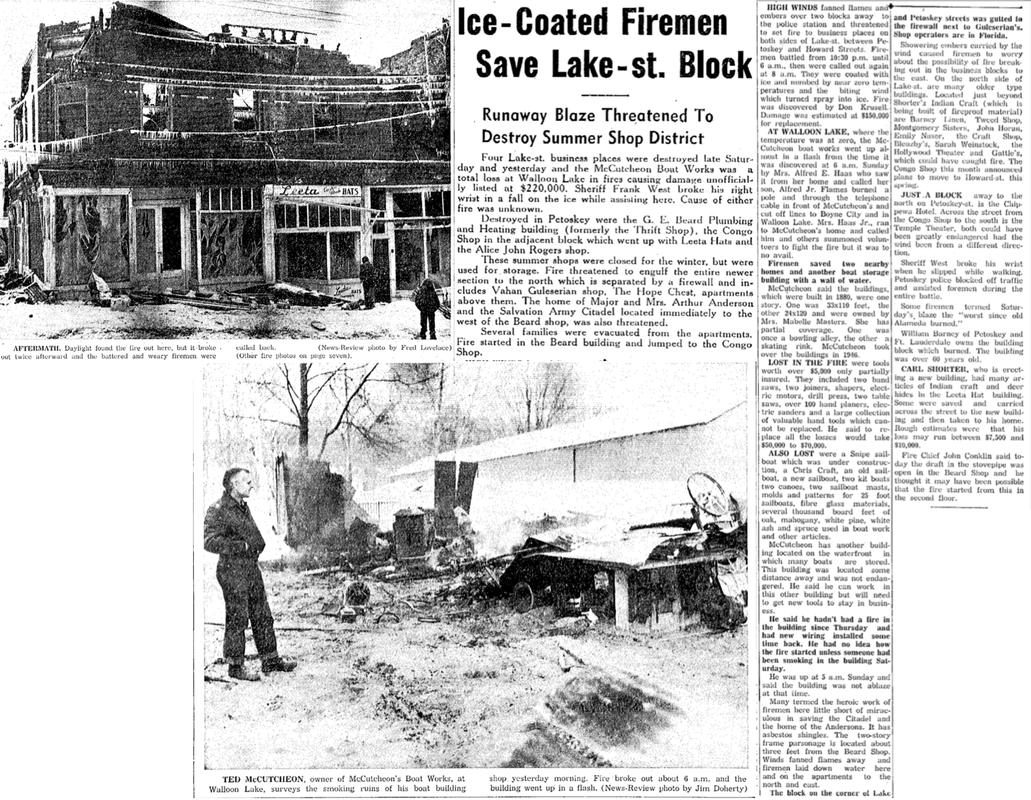 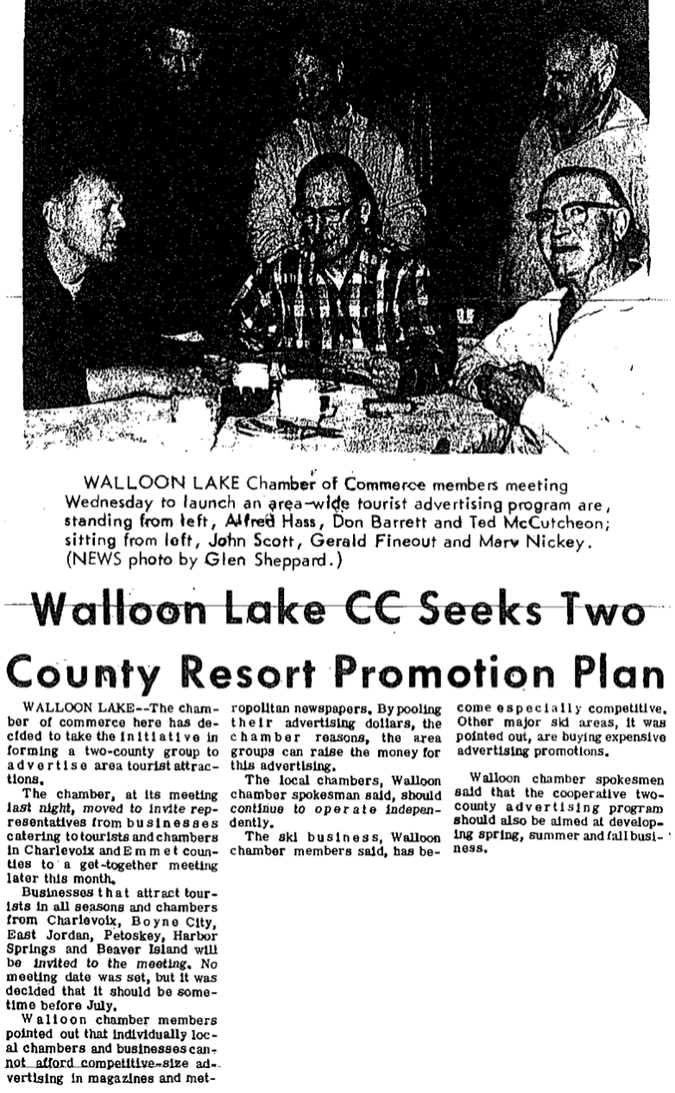 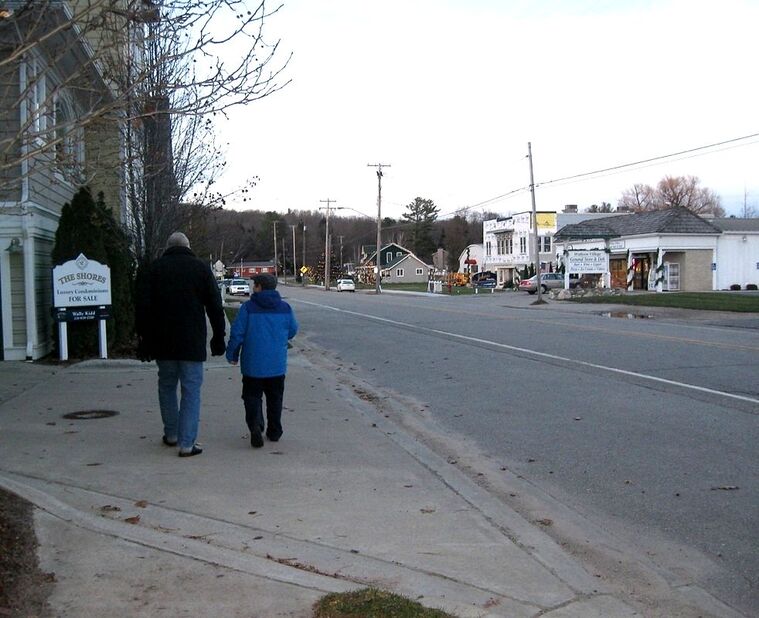 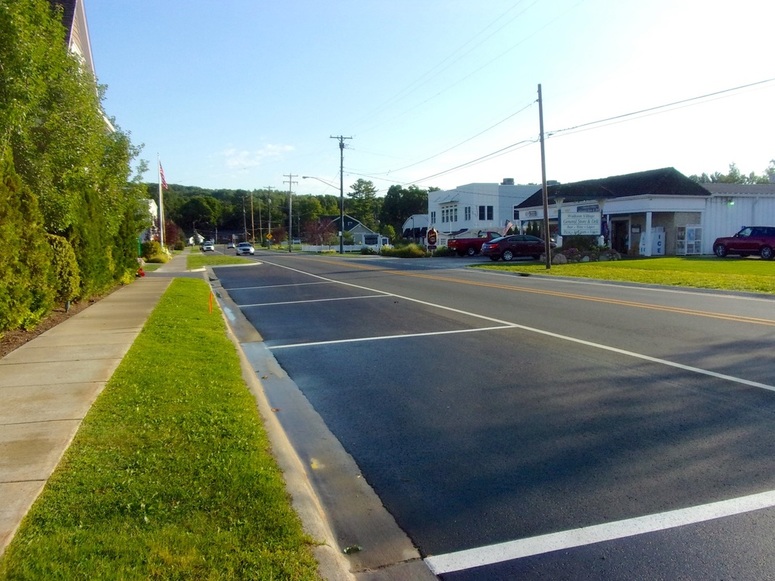 23 August 2016 ~ The streetscape includes parking spaces with bump-outs on the main street (compare to the 2013 photo above).

Panorama photo below presents a unique surrounding view... standing in front of the Barrel Back Restaurant,
from one end of the main street to the other toward the general store, around, and back to the Barrel Back... 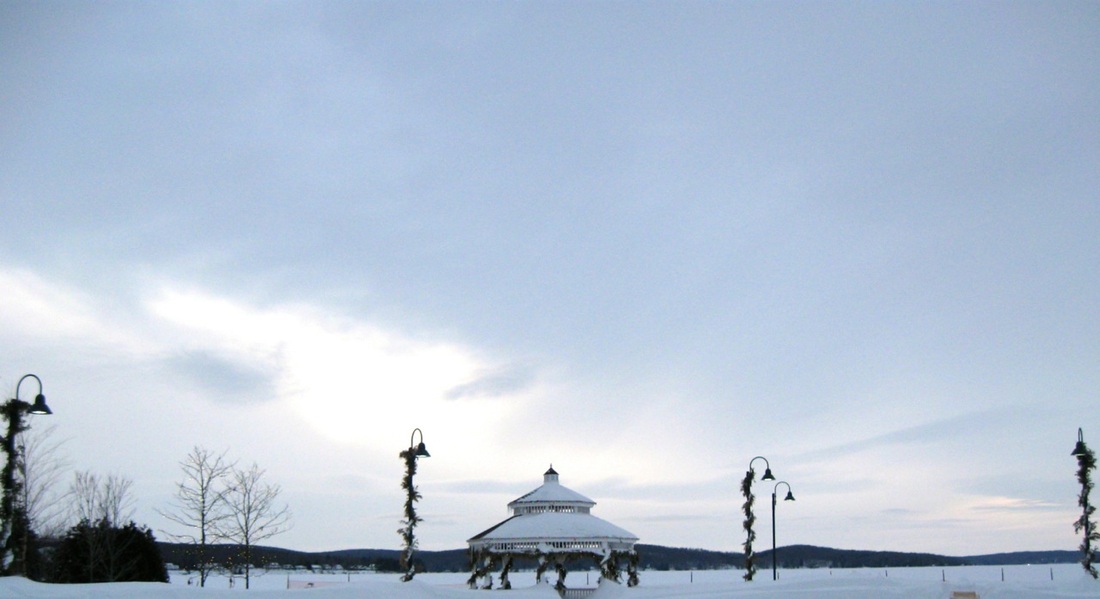 The Foot from the panoramic perspective of a bobbing putt putt ~ Submitted by Pinky McCutcheon taken 1 September 2017
So many beautiful views exist of The Foot of Walloon Lake...
this view is from the hillside up behind North Shore Drive (some ice still on the lake) 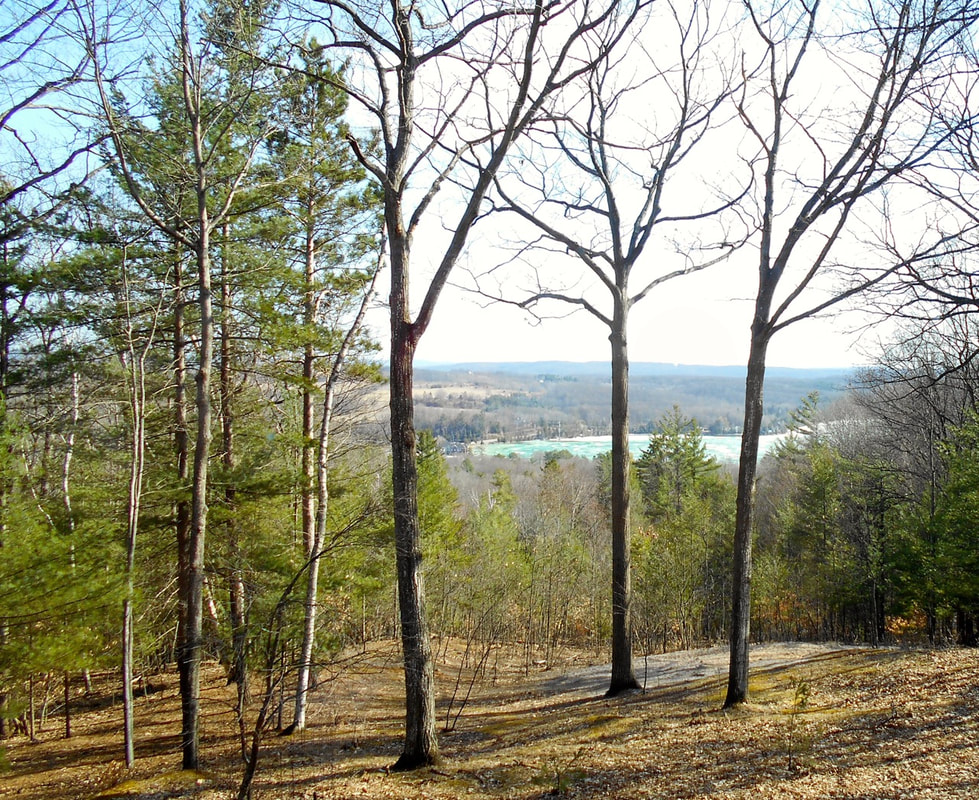